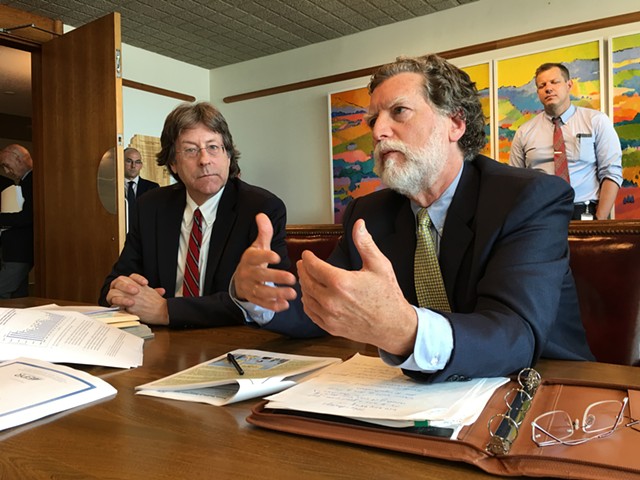 Vermont's state economists are forecasting continued revenue growth in the next two years, with a downturn likely after that. They estimate an additional $33 million in revenue in fiscal year 2019, which just began on July 1, and another $18 million the following fiscal year.

Tom Kavet and Jeffrey Carr presented their consensus report Friday afternoon to the Emergency Board, a panel that includes Gov. Phil Scott and the chairs of the four legislative money committees: House Appropriations, House Ways and Means, Senate Appropriations and Senate Finance.

"Any way you slice it, this is an upgrade," Carr told the board. "We have a reasonably positive outlook on the economy, at least in the near term."

Kavet said that the high-octane economy is getting a double jolt from federal tax cuts and deficit spending by the U.S. government. But he cautioned that a downturn is inevitable.

"We are approaching a cyclical peak," with many indicators at or near record levels, Kavet noted. "When you look back in time, it doesn't typically stay there very long."

"If we're back here next year talking about more growth, it would be the largest continuous economic expansion in our history," added Carr.

A large part of the economists' revenue upgrade comes from an especially unreliable source: corporate revenue repatriations. For years, American corporations have been keeping money overseas to avoid paying U.S. tax on it. The federal tax bill imposed a lower rate for repatriated money in order to encourage corporations to bring it home. For states that levy corporate income taxes, including Vermont, that means a revenue boost. But it might not last.

"[Corporations] employ the same people who figured out how to hide it to decide the best way to bring it back," Kavet said in an interview after the E-Board meeting. "They're thinking of all the games that can be played to minimize the tax. If state taxation shows up on their radar, I'm sure that somebody's going to contest that."

In the just-ended fiscal year, Vermont got roughly $15 million in tax revenue from repatriated profits. Kavet and Carr are projecting another $20 million in the new fiscal year.

"Somebody could have a court case and win it, and say states can't touch this money," Kavet said. "You've got the biggest law firms, the biggest corporations, the cleverest accountants at work on this." If they win, Vermont would have to give back the money already collected and lose the projected revenue. "You could have a $35 million 'oops,'" he said.

Kavet and Carr suggested setting aside much of the projected $33 million in new revenue against the possibility of having to refund the potential "oops."

Kavet noted one worrying trend in his remarks to the E-Board. Jobless rates are very low and corporate profits are strong, but wage growth remains stagnant. In fact, when adjusted for inflation, wages actually declined a bit in June. And over the past two years, wages have failed to keep pace with inflation — let alone the growth in corporate profits.

"It's a distributional issue," Kavet explained. "There has been a greater concentration of income growth in a smaller and smaller portion of the population, the high end. This is nothing new. It's about a 35-year trend, and it's continuing."

Among the members of the E-Board, there was general agreement of the need to be fiscally prudent. The Board accepted Kavet and Carr's economic forecast on a unanimous vote.
Prev
Next