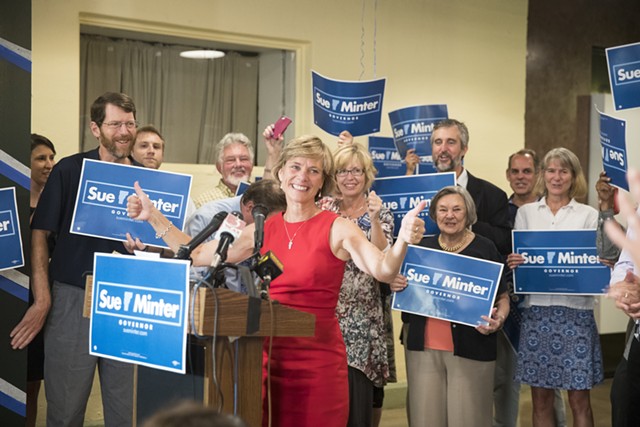 According to a Minter campaign finance report filed Saturday, she returned Leamy’s contribution September 17. That was a day after Leamy was named in a lawsuit related to the Burke Mountain Hotel & Conference Center project, which was funded through the federal EB-5 investor visa program.

Two Chinese citizens who filed the lawsuit — alleging they’d been misled about the project — dropped the suit a week later.

Leamy made two $500 contributions to Minter’s campaign — one on January 19 and a second on March 2. At the time, federal and state authorities were investigating Northeast Kingdom projects at Burke, Newport and Jay Peak. In April, state and federal authorities filed civil suits against project developers Ariel Quiros and Bill Stenger, alleging fraudulent funding schemes.

Minter’s campaign did not immediately respond to a request for comment on why she returned Leamy’s money. Minter and Republican Lt. Gov. Phil Scott are vying for the open governor’s seat in the November election.

Leamy also made a total of $5,000 in campaign contributions to Sen. Patrick Leahy (D-Vt.) back in May 2014, at a time when Stenger was being questioned by the U.S. Securities and Exchange Commission.

Leahy’s opponent in this year’s election, Republican Scott Milne, raised questions about the contribution and its timing at press conferences last month. Leahy told VTDigger.org that he would set the money aside until the case is settled. Though the suit has been dismissed, Leamy’s cash remains set aside, Leahy campaign spokesman Jay Tilton said Monday.