by Derek Brouwer and Paul Heintz 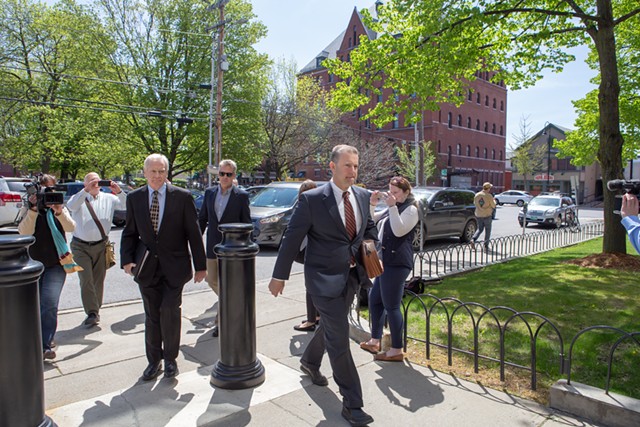 Two men who were once heralded as the economic saviors of the Northeast Kingdom appeared in federal court in Burlington Wednesday to answer criminal charges that they perpetrated what may be the largest financial fraud in Vermont history.

Ariel Quiros, 63, and Bill Stenger, 70, stand accused of misleading foreign investors and EB-5 program regulators in order to embezzle millions meant for a biotechnology business in Newport that they proposed but never seriously pursued. Two of their business partners face indictments as well.

The men were charged with conspiracy to commit fraud, wire fraud and making false statements. Quiros, who federal authorities painted as the ringleader, was also charged with money laundering in connection with a $6 million payment to the Internal Revenue Service and the purchase of a $46,000 Jeep Rubicon.

The EB-5 projects brought in hundreds of millions of dollars from investors, much of which was used not to create jobs in the Northeast Kingdom, but to enrich the four men, authorities allege. In a civil lawsuit brought in 2016, the U.S. Securities and Exchange Commission described the projects as "Ponzi-like."

Stenger, a longtime Vermont resident, was the front man, in charge of recruiting investors and using "his personal connections and reputation to garner support from local, state, and federal politicians," the feds allege.

Quiros, of Miami, was the "ultimate decision maker," according to the indictment.

William Kelly, of North East Contract Services, was his assistant. A fourth defendant, Jong Weon Choi, of South Korea, was Quiros' "hidden partner," who developed the business plan for the supposed biotechnology company dubbed AnC Bio Vermont. He did not appear in court and prosecutors said he was “at large.”

A rift between Stenger and the other defendants was evident Wednesday. Stenger’s lawyer, Brooks McArthur, declared his innocence and claimed he had been duped.

“To a certain extent, this is a good day,” McArthur said to reporters outside of the courthouse. “He can finally tell his story.”

When Stenger was led before Magistrate Judge John M. Conroy, he was wearing handcuffs. Asked how he pleaded, Stenger responded, "Not guilty, your honor."

'Sunshine Stenger' Stays Optimistic Despite Mounting Troubles
By Paul Heintz
Economy
He was released on $100,000 bond and on the condition that he not speak with people involved in the case. McArthur told the judge that Stenger was still working as a consultant with receiver Michael Goldberg, who has been managing ski resorts Jay Peak and Burke Mountain, which were sites of EB-5 projects. The judge agreed that Stenger can speak to some witnesses as needed to conduct business — but not about the indictment.

“Bill Stenger has lived in the Northeast Kingdom for 35 years," McArthur told reporters. "He has dedicated his life to the improvement of Vermont and the Northeast Kingdom. There is, in the strongest possible way we can say it, a denial that he engaged in any criminal activity at all."

Feds have "zero evidence" that Stenger personally benefited from what is alleged, he added, vowing to vigorously defend him.

“Was he negligent in his oversight of people he trusted?” McArthur asked later. “He’s admitted to that. But does that rise to the level of his involvement in a criminal fraud?”

Stenger believes the other three defendants committed crimes. “He was shocked and it has caused him great sadness for what has happened in the Northeast Kingdom,” McArthur said.

AnC Bio Vermont collected $85 million from 169 investors, plus another $8 million in administrative fees. Yet final designs for the Vermont facility were never even completed.

Much of the money was diverted as collateral and to pay off Quiros' other loans, disguised as invoices to the shell company. Almost none of it went toward the AnC Bio Vermont project.

U.S. Attorney Christina Nolan held a press conference in Newport Wednesday afternoon to discuss the case. She spoke near a cratered downtown block that serves as a reminder of the EB-5 project's false hopes. The feds allege the defendants diverted funds from the AnC project for the down payment to purchase the Spates Block. It was to be another EB-5 project, but the plans unraveled.

Nolan said the AnC Bio Vermont project wasn't designed to create jobs but to siphon millions to Quiros and his secret Korean business partner, Choi. The criminal investigation began in 2015. Nolan said her office made a strategic decision to focus on the AnC fraud, both for its scale and its place as the "culmination" of Quiros' run of EB-5 endeavors. She would neither confirm nor deny whether additional charges may still be forthcoming for actions involving the earlier projects.

Vermont politicians, including then-governor Peter Shumlin, had latched onto the prospect of job creation in the NEK. Shumlin vouched for the plans publicly. He said at the time that the project's finances had been audited, which was not true.

Asked by VTDigger.org founder Anne Galloway, whose news outlet published investigations about EB-5, if prosecutors were looking into Shumlin's misstatement, Nolan noted only that the businessmen had repeatedly lied to government officials in charge of overseeing the EB-5 program.

The initial SEC investigation of Quiros and Stenger started in mid-2013. The SEC sued the men in 2016, ultimately seizing control of the ski resorts. The indictment accuses the men of making false statements to the SEC in an effort to convince the commission to end its investigation.

Related Kingdom Comedown: A Breach of Trust in a State That Wanted to Believe

Kingdom Comedown: A Breach of Trust in a State That Wanted to Believe
By Paul Heintz
Fair Game
Vermont's regional EB-5 center scrutinized the biotech project while the SEC investigation got under way, but allowed the men to resume marketing to investors in April 2015. Quiros and Kelly are accused of misleading the center when officials there started asking questions.

Kelly appeared Wednesday morning with his attorney for a 20-minute hearing before Judge Conroy. Asked how he pleaded, he answered, “Not guilty, sir.”

Assistant U.S. Attorney Paul Van de Graaf told the judge that the discovery process during the case was expected to be “significant, voluminous and complex.”

Kelly was released on $100,000 bond, on the condition that he have no contact with codefendants, victims or witnesses. Approached by reporters as he left the courtroom, he declined to comment.

Quiros' arraignment followed. He, too, was led into court in cuffs. “Not guilty,” he said, when asked his plea. He described himself as retired. The judge allowed him to go free, with conditions similar to the ones set for the other defendants.

Quiros' attorney, Seth Levine, noted that lawyers are expected to review “a great deal” of documents during discovery, including material related to Vermont’s “congressional delegation and former governors.”

Outside the courthouse, Levine was critical of the case. "This should never have been brought," he told reporters.


Correction, August 28, 2020: A previous version of this story misidentified Stenger as a "native" Vermonter.