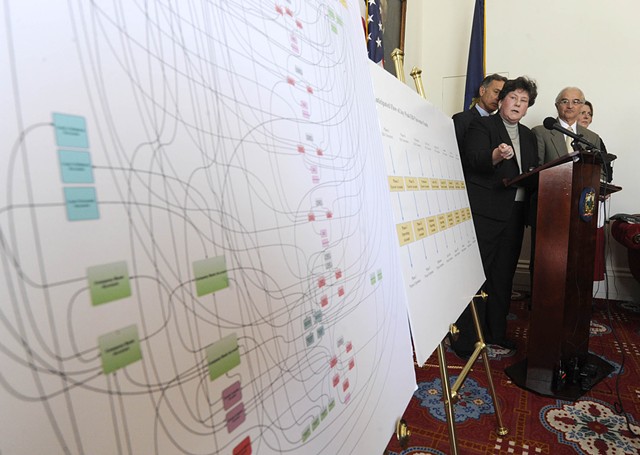 The Securities and Exchange Commission on Thursday accused a pair of Vermont developers and the companies they run of committing massive fraud in the state’s rural Northeast Kingdom.

The civil case, which was unsealed Thursday in U.S. District Court in Miami, alleges that Jay Peak Resort owners Ariel Quiros and Bill Stenger misused hundreds of millions of dollars they raised from foreign nationals through the federal EB-5 investor visa program. Of the more than $350 million they collected to build hotels, ski resort improvements and a biomedical research facility, the SEC said, more than $200 million was misappropriated.


Related EB-5 Coverage
The state of Vermont, which collaborated with federal investigators for more than a year, filed a similar suit Thursday morning in Washington Superior Court. That afternoon, a Burlington-based federal prosecutor said he was conducting an investigation to determine whether criminal charges should be brought.

According to the SEC, Quiros and Stenger lied to investors and “omitted key information” while raising money for the Northeast Kingdom Economic Development Initiative — a series of projects planned for Jay, Newport and Burke. Rather than direct the money to its intended projects, the agency alleged, the developers diverted a large portion of it “to fund deficits in earlier projects.”

In a written statement, the SEC described it as a “Ponzi-like” scheme.

Quiros, a Miami resident and owner of Q.Resorts, “systematically looted” as much as $50 million of the misappropriated funds to pay for personal expenses, according to the SEC. Those included a $2.2 million apartment at Trump Palace in New York City and millions of dollars worth of personal income taxes, according to Gov. Peter Shumlin. The fraud began as early as 2008, the governor said.

Federal and state authorities raided at least one of the developers’ properties, Q Burke Hotel & Conference Center, Wednesday afternoon. They took control of the facility, changed the locks and began combing through evidence, according to witnesses.

The SEC froze the companies’ and Quiros’ assets and put the businesses under receivership. The federal court appointed Miami attorney Michael Goldberg to oversee and administer the developers’ assets and keep the resorts running while the litigation proceeds.

Less than an hour after the SEC announced its case around noon Thursday, Shumlin, Attorney General Bill Sorrell, Department of Financial Regulation Commissioner Susan Donegan and Secretary of Commerce Pat Moulton convened a Statehouse press conference to address the charges.

“We all feel betrayed,” Shumlin told a rapt crowd of lawmakers, administration officials and reporters. “It’s a dark day for Vermont.”

The governor said he was particularly concerned about “the hundreds of employees in the Northeast Kingdom who rely on Jay Peak, Q Burke and the related projects to support their families — projects that appeared to hold so much promise.” He said he had just spoken with Goldberg, who assured him federal authorities would attempt to “maintain normal operations” at Jay and Q Burke Mountain Resort.

“Therefore, we do not expect significant job losses as a result of today’s actions,” Shumlin said.

The governor later acknowledged that two Newport projects yet to begin construction — a biomedical research facility and a downtown redevelopment initiative known as the Renaissance Block — “will not happen.”

Donegan said her department had worked with the SEC for more than a year to investigate the matter and had issued 64 subpoenas and gathered 300,000 documents.

In a corner of the governor’s ceremonial Statehouse office, she unveiled a poster board diagramming the intricate manner in which the developers allegedly channeled investors’ money between projects and accounts. The funds, she said, had been transferred “indiscriminately and … used as a personal piggy bank.”

Calling it the “spaghetti map” Donegan said of her diagram, “This is what we allege fraud looks like.”

Later in the press conference, Sorrell took a turn describing the flowchart.

“This is not a depiction of a simple bank robbery,” he said, gesturing toward the exhibit. “Rather, this depicts what we allege to be a massive and complex, fraudulent enterprise. It is very early in what will likely be lengthy litigation. As we and federal authorities learn more, the litigation could broaden and deepen.”

As the state officials spoke, U.S. Attorney Eric Miller released a statement of his own declaring that federal criminal charges were possible.

“My office has been conducting, and continues to conduct, an investigation designed to determine whether or not there have been violations of federal criminal law in connection with EB-5 projects in the Northeast Kingdom,” he said.

The federal EB-5 program provides green cards to foreign nationals who invest at least $500,000 in qualified economic development projects. Critics have said for years that it lacks sufficient government oversight and is a magnet for fraudulent activities.

Vermont has championed the EB-5 program since the administration of former governor Howard Dean in the late 1990s. Shumlin and former governor Jim Douglas both traveled abroad to promote the state’s efforts to attract EB-5 investment.

Sen. Patrick Leahy (D-Vt.), one of the program’s strongest proponents, sought to distance himself from it Thursday. In recent years, he has sought to reform elements of EB-5 oversight, even as he has fought to extend its authorization.

On Thursday, Leahy said the program was “in dire need of reform” — and suggested its days were numbered.

“Fraud and abuse cannot be tolerated, no matter where it occurs,” he said. “Without reform, I believe the time has come for the program to end.”

For more than a decade and a half, Vermont’s Agency of Commerce and Community Development simultaneously promoted the state’s EB-5 projects and conducted limited oversight to ensure they complied with state law. Acknowledging the inherent conflict of that arrangement, Shumlin shifted oversight responsibilities to the Department of Financial Regulation in December 2014. On Thursday, he credited that move with setting the state’s investigation in motion.

Asked whether he should have acted sooner, Shumlin defended his administration. He repeatedly noted that the alleged fraud began two years before he took office in 2010.

“Obviously we can all sit here and say, ‘You know, who should have done what, when, differently?’” the governor said. “And we have done a lot of inner-searching in my administration over the last year as this has become more obvious to us. But I think the answer is that, you know, at the heart of it, there’s a certain amount of trust in the partnerships that we have with the private sector in government.”

Shumlin has forged closed ties with Quiros and Stenger over the years.

They and the companies they control donated tens of thousands of dollars to his campaigns. He traveled to Asia and Miami with Stenger to promote Vermont’s EB-5 projects. His former campaign manager and deputy chief of staff, Alex MacLean, left his office to go to work for Jay Peak. Shumlin even hailed the two in his 2013 State of the State address, saying that they “continue to shine a beacon of hope, opportunity and future prosperity” in the Northeast Kingdom.

At Thursday’s press conference, Shumlin said those connections played no role in his decision-making.

“I think it’s a testament to the fact that campaign contributions don’t make a difference that I set up this structure that went in and found this out and brought us to where we are today,” he said. 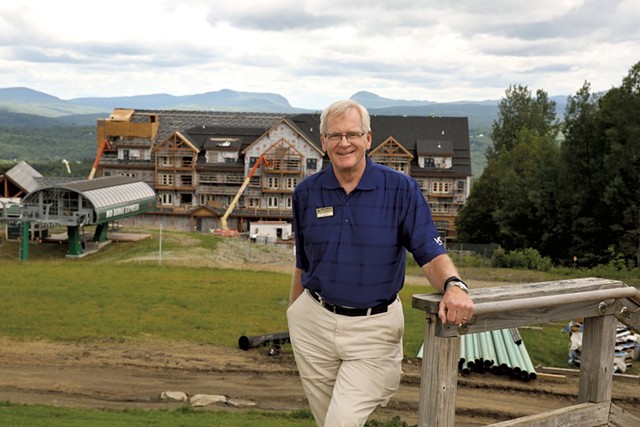 An 81-page complaint filed Thursday by SEC attorneys in U.S. District Court in Miami says that Quiros and Stenger flouted regulations from the moment they took control of Jay Peak eight years ago and continued to do so through every subsequent development project.

Quiros financed most of his $25.7 million purchase of the resort in 2008 using EB-5 money raised for the construction of hotels and other improvements at Jay, even though EB-5 agreements explicitly forbade that.

From there, SEC investigators describe a classic Ponzi scheme, in which millions of dollars raised from foreign investors for new projects was illegally devoted to previous projects and as collateral for margin loans that Quiros took out.

The complaint describes Quiros as the leader, but it accuses Stenger of inappropriately transferring funds to his partner and ignoring his wrongdoing.

Additionally, Quiros is accused of siphoning some investor money for personal use, including opening a $10.7 million line of credit that was used in part to pay his taxes, and buying the luxury condo at New York’s Trump Place. Quiros also financed his 2012 purchase of Q Burke Mountain Resort using investor money raised for other projects, the complaint says.

The complaint makes clear that EB-5 projects underway in the economically challenged Northeast Kingdom may be doomed.

At Jay, the developers built the Stateside Hotel and Baselodge in 2013, but they never completed promised vacation cottages, a recreation center and a medical center. Those projects would cost another $26 million to finish, the complaint says, but Quiros and Stenger have blown almost all of the money earmarked for the project.

Similarly, a proposed biotech facility in Newport, for which ground was broken last May, is at least $43 million short and in “grave danger” of not being built, the complaint says.

That facility, AnC Bio, is described in the complaint as “nearly a complete fraud.”

Investors, it alleges, were being fed “bogus claims that the defendants are in the process of obtaining Food and Drug Administration approval for the research center’s products. In reality, the defendants have not undertaken the necessary steps to begin the lengthy and cumbersome process of getting FDA approval.”

“Quiros’ and the other defendants’ misuse and looting of investor funds have finally caught up with them,” SEC attorneys wrote. “The Defendants have run out of investor money to complete the Stateside project due to their misappropriation and misuse of that money.”

On Thursday at 11:30 a.m., Teak’s Lock Service owner Tim Hooker stood in the parking lot at Q Burke Mountain Resort, having just finished changing the locks at the administration offices. He said he had begun the job Wednesday night, unsure of who had ordered the change.

“I’m good with really not knowing what’s going on right now,” he said.

Up the hill, at the unopened 116-room hotel, a worker was loading chairs and boxes into the back of a PeakCM company pickup truck at noon Thursday. The company has served as the hotel’s construction management firm. The worker declined to comment, locked up and left a few minutes later.

A Burke employee said he was directed not to speak to the media. He noted that the ski area is between seasons with no skiing or biking going on now, but ticket sales were continuing.

As news of the federal and state enforcement actions spread Thursday afternoon, Burke Chamber of Commerce president Tim Tierney said, “Everyone’s kind of apprehensive. Everybody knows the importance of that mountain in this community ... We only want the best for Burke Mountain.”

Tierney, who is also executive director of the nonprofit Kingdom Trails, said the community was hoping to learn more details.

Tierney said the trail organization is expecting 660 people in town Friday for Rasputitsa, a gravel road race named after the Russian word for “sea of mud.”