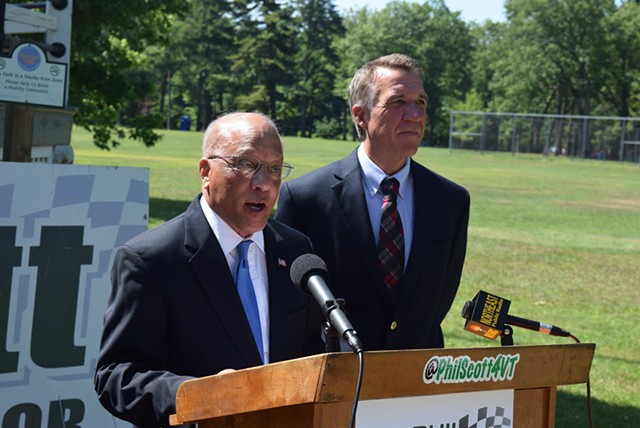 With six days to go until the primary election, the two Republican candidates for governor turned up the intensity Wednesday.

“Phil offers the best chance to correct our course in November,” said Brock, who ran unsuccessfully for governor in 2012 against retiring Gov. Peter Shumlin. “His quiet, steady leadership is exactly what Vermonters need after six years of bombast, over-promises and underwhelming results.”

“I want to make sure all our bases are covered,” Scott said, when asked why he sought the endorsement. “I felt that this was going to be a contested race from the very start, but obviously with the amount of negative ads, and from my standpoint, deceitful ads, that have transpired over the last few weeks, it’s given me concern.”

Lisman, 69, of Shelburne, and Scott, 58, of Berlin, are locked in an unexpectedly fierce primary race that will be decided Tuesday. The winner will face the victor of a three-candidate race in the Democratic primary.

Lisman, a retired Wall Street executive who has never run for office before, has spent at least $1.6 million of his own money on a campaign that has included a steady stream of television ads and fliers highly critical of Scott’s time in office.

The endorsement added to the tension between the two candidates. Lisman launched a press release criticizing the announcement before it even happened Wednesday morning. Lisman’s staff then lined the street to and from Scott’s press conference with Lisman campaign signs.

“Randy’s endorsement of Phil Scott is further evidence of politics as usual — the same politicians supporting the same politicians to protect the political establishment,” Lisman’s statement said. “While we had hoped Randy would remain neutral, as he had promised us, we are confident we will have his full support after the primary election.”

Brock said Wednesday that he never promised Lisman he would stay neutral in the race. “People want to know where you stand,” Brock said. “Leaders need to lead.”

Lisman implied that Scott and Brock must have patched up old differences related to Scott’s lukewarm support of earlier Brock campaigns. Brock denied they ever needed to. “There is no hatchet to bury,” he said.

When this year’s primary is over, Scott and Lisman will have plenty of hatchets to bury. Each said they would, if they lost, support their opponent as the nominee. But they seemed a long way from such peace Wednesday.

That was particularly true when moderator Peter Hirschfeld got to the portion of the VPR debate where candidates direct questions to each other.

Lisman went after Scott on the same issues he’s hammered through months of TV advertising. 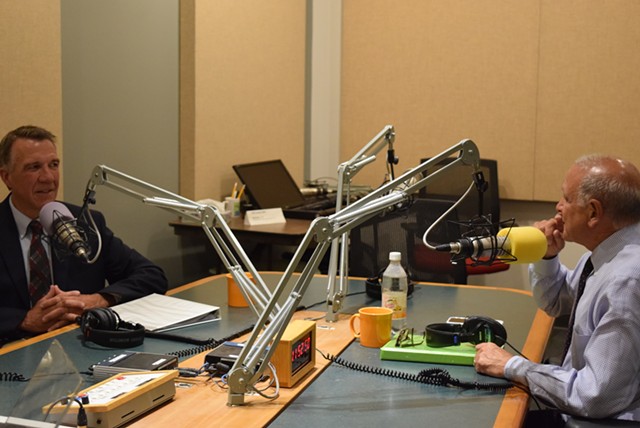 “I’ve reminded you of what you’ve said in the past, ranging from ‘Single-payer [health care] looks like a good idea,’ to ‘The governor looks fiscally prudent to [me],’” Lisman said. “You don’t really believe in ideas … you don’t have a conviction about things. And in America, it’s big ideas that matter.”

“You’re taking snippets of what I’ve said and totally manipulating the truth. If you’re not willing to put the whole statement in, then you shouldn’t use it. It’s D.C. politics at its worst,” Scott replied. “We’ll see on Tuesday, but I believe Vermonters know the truth.”

Scott, taking his turn to ask Lisman a question, noted that Lisman has declined to say whether he will support Republican presidential nominee Donald Trump, but that he has in the past contributed to Democrat Hillary Clinton’s campaigns. “Are you refusing to take a position on Trump because you are supporting Hillary?” Scott said.

Lisman lit into Scott over DuBois Construction, the excavation company Scott co-owns, reiterating arguments that DuBois’ state contracts would be a conflict of interest if Scott is governor. “He’s going to have to make a choice. Don’t do business with the state or don’t be governor,” Lisman said.

Scott, who’s been with the business for 30 years, said he had engaged the Burlington law firm of Primmer Piper Eggleston & Cramer to set up a blind trust under which he would have no control over company decisions and wouldn’t benefit from profits. He described the trust as a template members of Congress use to separate themselves from businesses.

Another exchange focused on Act 46, the state’s new school district consolidation law, which Lisman has called for repealing.

“You were the guy who was supposed to say there was a better way than Act 46,” Lisman said. “I just don’t get how come you didn’t say more.”

“Inaction on Act 46 or anything to do with reducing school costs would have been inappropriate,” answered Scott, who has called for altering Act 46 to retain school choice options. “At least it started the conversation, tough conversation about where we move in the future.”

“I don’t think you stood up for hardworking Vermonters on this issue,” Lisman retorted.

“At least I’ve been here as a hardworking Vermonter all my life,” Scott said, referring to the decades Lisman spent working on Wall Street.