Scott, Lisman Take Off the Gloves at State GOP Convention | Off Message

Scott, Lisman Take Off the Gloves at State GOP Convention Vermont Republican Party leaders spoke first of the need for unity at their state convention Saturday. Then the party's two candidates for governor delivered sizzling attacks on each other.

It started with a campaign flier that arrived in some Vermont Republicans' mailboxes Saturday. In it, Bruce Lisman linked rival Phil Scott to retiring Democratic Gov. Peter Shumlin.

"This is D.C. tactics at its worst," Scott said from the stage Saturday, holding up a copy of the flier before tossing it to the floor. "I gave Bruce a pass when he did opposition research on me ... I can't give him a pass on this. At least he's showing me his stripes." 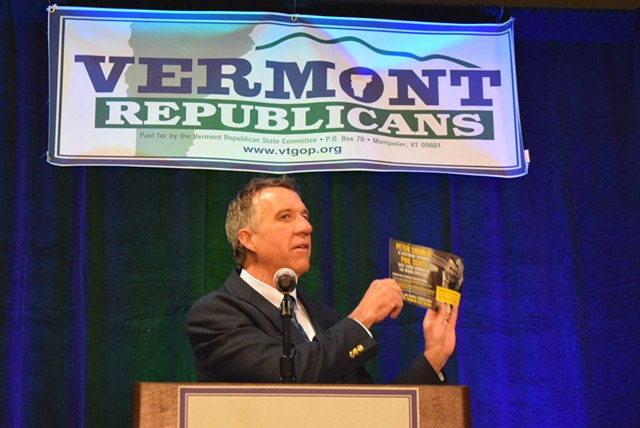 When Lisman took the stage next, he went after Scott unabated. When people ask him why he's running for governor, Lisman said, he replies: "Well, Phil ... Phil is a nice guy. He has good intentions. Good intentions won't move us in another direction."

Lisman, a retired Wall Street banker who has never held elected office, didn't stop there. "He's had 15 years to make a difference, to make a mark, and I believe he hasn't," Lisman said. Scott served as state senator for 10 years and lieutenant governor for more than five. 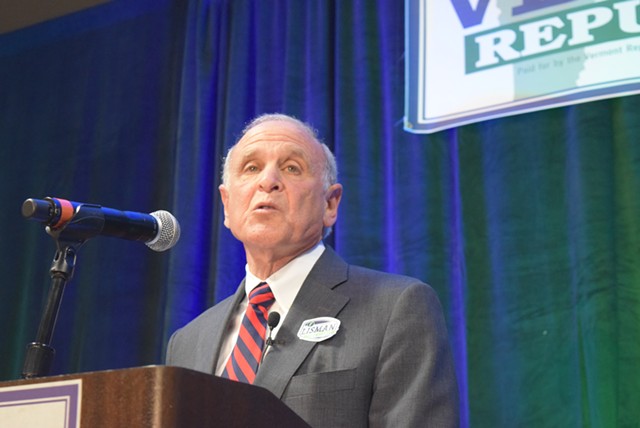 The two candidates are competing in the August 9 primary for the Republican nomination for governor.

The 308 Republican state delegates gathered for the state convention at the Sheraton Hotel & Conference Center in South Burlington. Their main duty was to elect delegates to the national presidential convention. Though the state party is split over its support of presumed presidential nominee Donald Trump, leaders emphasized the importance of working together.

There was no outward dissent over Trump, though Vermont Republicans have been deeply divided. The 13 delegates chosen Saturday, plus the party's three automatic delegates, already chosen by virtue of party position, will officially be split — eight for Trump and 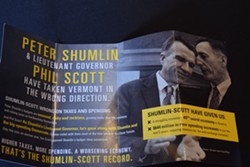 eight for Ohio Gov. John Kasich, based on Vermont's March 1 primary totals. But because Kasich has dropped out, all will likely end up supporting Trump at the national convention in July in Cleveland.

Delegate candidates to the national convention didn't speak at Saturday's convention, but were chosen by paper ballots that the 308 state delegates cast. Nine of the 13 delegates chosen Saturday had given their commitment to support Trump, said Darcie Johnston, Trump's state director and a winning delegate.

Scott and Lisman avoided Trump entirely in their speeches. Scott has said he can't support Trump; Lisman has said he hasn't determined whether he will.

Within the ranks, sentiment ran strong both for and against Trump.

Rep. Patti Komline (R-Dorset) was among several Republicans who tore Trump and Lisman advertisements off the bottom of their convent 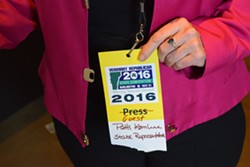 But Cheryl Donlan of Enosburg Falls, staffing a Trump table where T-shirts, lawn signs and bumper stickers were free for the taking, was all-in for Trump. "I went to a couple of rallies and saw Donald Trump," she said. "He talked to you, not at you. That was the first time I'd seen that with a regular politician."

But it was state politics that took center stage Saturday, as some Republicans were hearing from their 2016 candidates for statewide office for the first time.

In his criticism of Lisman, the mild-mannered Scott was as sharp-edged as he's ever been in a political speech. Scott said he learned of the flier Lisman had sent when he arrived Saturday afternoon at the convention.

The flier shows a photo of Scott applauding Shumlin at a Statehouse joint assembly, the two standing close together at the House podium. "Peter Shumlin and Lieutenant Governor Phil Scott have taken Vermont in the wrong direction," it says. "Higher taxes. More spending. A worse economy."

Sen. Dustin Degree (R-Franklin) said he pulled it out of his mailbox Saturday morning before heading to the convention. A Scott supporter, he said he found it offensive. He called it "disingenuous" to link the Republican lieutenant governor to the Democratic governor's policies. "Trying to tie Phil Scott to Peter Shumlin? It's an incredible reach."