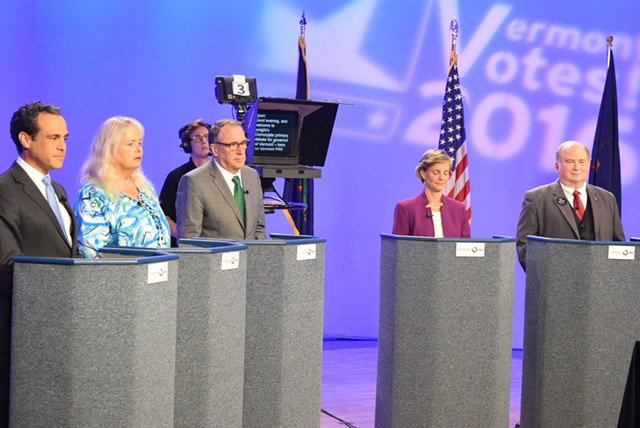 Four days after controversy over wind power erupted as an issue in the Democratic primary race for governor, the candidates stood side by side in the same room for a debate at Vermont PBS studios in Colchester. In several sizzling exchanges, the contenders fired off accusations and counter-accusations.

“I have not changed,” Dunne countered, arguing that a statement he issued Friday matches what he has said publicly several times: He supports allowing communities to vote whether to host wind projects. “I think this approach will give us more renewable energy, including wind.”

“It was one position on Friday, a different position today,” offered fellow candidate Peter Galbraith, who initially supported Dunne’s call for community votes on the wind projects, but withdrew the support Tuesday. Galbraith said Dunne called him before the debate to clarify that he wouldn’t incorporate the community votes into state law.

In between the contenders’ war of words, the race’s two non-traditional candidates offered some comic relief amid the tension. Cris Ericson, who is also running for U.S. Senate, used most of her allotted time to claim the Democratic Party was excluding her from debates and to tell viewers to visit the U.S. Marijuana Party website.

H. Brooke Paige, who is also running for state attorney general, voiced his opposition to industrial wind projects, but didn’t enter the fray with the three front-runners.

The five candidates are vying to come out on top of the August 9 primary as the Democratic Party’s gubernatorial nominee. Two Republicans, Phil Scott and Bruce Lisman, are competing in their party’s primary.

In recent days, debate over Dunne’s stance on wind has blown up what had previously been a quiet campaign.

“This is the clearest difference among the candidates,” said Galbraith, who supports banning new industrial wind projects in Vermont.

Minter has benefited from Dunne’s statements. Renewable energy advocates critical of his support for community votes on siting have in recent days embraced Minter instead. But Dunne argued Tuesday night that he has the most extensive plan among all the candidates to combat climate change.

The debate ranged into another recent controversy when Minter took Dunne to task over comments he made about a contract she signed during her time as transportation secretary. Dunne raised questions Friday about whether Minter had properly vetted a contract with developer Ariel Quiros to run the state-owned Northeast Kingdom International Airport in Coventry. More than a year after the contract was signed, federal prosecutors filed fraud charges against Quiros related to EB-5 immigration projects he ran at Jay Peak, Burke Mountain and in Newport.

“I see this as a smear campaign,” Minter said. She called the airport contract a “standard contract” that was not part of an EB-5 project, though she said Dunne made it sound as if it were. “Matt is deliberately trying to mislead the public.”

The pact allowed Quiros to subcontract the strip’s maintenance and management to the longtime airport operator. His company also planned to build a new airport terminal. “I made absolutely sure there was no risk to the state, and no harm was done,” Minter said.

“What we did was ask a series of questions that I think was appropriate,” Dunne responded. “We still haven’t gotten answers.”

Galbraith came to Minter’s defense — in a way. Galbraith said he didn’t understand why the state contracted with Quiros to run the airport when Quiros had no airport experience, but he said that question would better be addressed in an independent investigation.

“I genuinely think there ought to still be an independent commission to look at whether the state properly carried out its oversight responsibilities,” he said. “Let’s not make this a political football.”

In another moment of levity, Ericson suggested using electricity generated by solar farms to make holograms of butterflies, snowflakes and fall leaves that would, in turn, become tourist attractions.

The Democratic candidates meet again for a debate at noon Thursday on Vermont Public Radio. The Republican candidates will appear on VPR at noon Wednesday, and a debate that was held Monday night on Vermont PBS is available online.