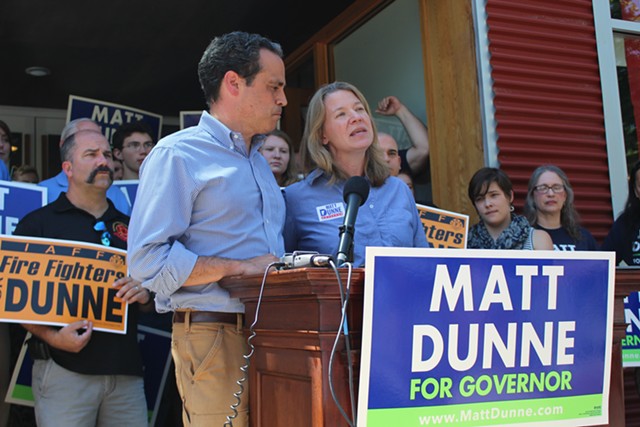 California entrepreneur Reid Hoffman has purchased $220,000 worth of television, radio and online advertising in support of Democratic gubernatorial candidate Matt Dunne, according to a disclosure filed Thursday with the Secretary of State’s Office.

Hoffman, a cofounder of LinkedIn and PayPal, has supported Dunne’s campaign from the start. Last summer, he and his wife, Michelle Yee, donated $8,000 to the Vermonter’s gubernatorial bid.

Currently a partner at the Silicon Valley venture capital firm Greylock Partners, Hoffman has an estimated net worth of $4.7 billion. He is one of many wealthy tech executives who have contributed to Dunne, a former Google manager. A California native, Hoffman went to school in Vermont, graduating from the Putney School. He did not immediately respond to a request for comment.

The advertising influx comes just days before the August 9 primary, in which Dunne faces fellow Democrats Sue Minter and Peter Galbraith. Republicans Phil Scott and Bruce Lisman are also competing for the office, which is being vacated by retiring Democratic Gov. Peter Shumlin.

According to the disclosure, Hoffman spent $154,000 on TV, $44,000 on radio and $22,000 on online ads. A Washington, D.C., firm that worked closely with Sen. Bernie Sanders’ (D-Vt.) presidential campaign, Devine Mulvey Longabaugh, produced the ads.

Hoffman’s investment comes a day after a super PAC affiliated with the Washington, D.C., group EMILY’s List bought more than $72,000 worth of TV ads supporting Minter’s campaign. That super PAC, called Vermonters for Strong Leadership, plans to spend between $100,000 and $200,000 in support of Minter’s primary bid, according to its president, retired Vermont lobbyist Bob Sherman. EMILY’s List, which endorsed Minter in January, works to elect pro-choice women to office.

Dunne declined an interview request Thursday morning but said in a written statement that Hoffman’s buy “was a surprise to us just like everyone else.”

“We didn’t know it was coming, but I’m not surprised that this is happening right after a super PAC formed by the biggest lobbying firm in Montpelier is putting significant money behind an ad that is dishonest about my commitment to clean energy,” Dunne said, referring to Vermonters for Strong Leadership. “Reid spent his teenage years in Vermont, he’s a friend, and he’s getting involved in the most transparent way possible, by putting his name on it.”

Throughout his campaign, Dunne has railed against the influence of big money in politics. At a Wednesday press conference, he framed himself as up against the “establishment.” In March, he returned all of his corporate contributions and called on his opponents to do the same. At the same time, he has raised hundreds of thousands of dollars from out-of-state donors and held fundraisers in New York City and Washington, D.C.

Vermont law prohibits individual donors from contributing more than $4,000 directly to statewide campaigns. But they are free to spend unlimited sums of money on independent expenditures in support of a candidate.

“The Vermont landscape has changed,” Secretary of State Jim Condos said Thursday. “The big money from out of state is clearly starting to encroach into Vermont House, Senate and even statewide races. I think anytime we start getting more money into it, it becomes problematic from the standpoint of whose voices are we listening to.”

Galbraith called it particularly hypocritical for Dunne to benefit from outside spending.

The former state senator and ambassador, who stopped spending money on television ads last week, said he hoped to get back on-air with another $20,000 buy.

“I see a big opportunity where I can win. Matt Dunne can’t win,” Galbraith said. “And so progressives who want an alternative to the more conservative Sue Minter want an alternative. Matt Dunne’s not gonna win. This influx of $220,000 is going to turn people off because it basically shows he’s not independent of corporate interests.”