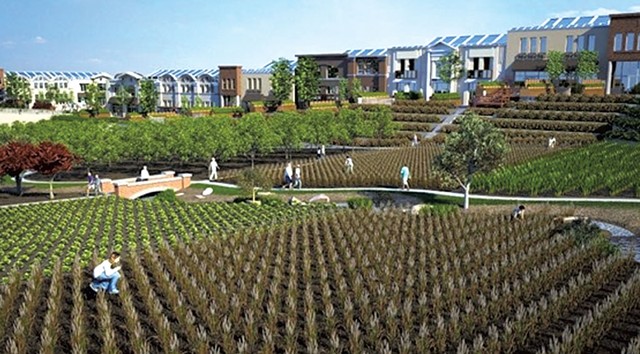 A wealthy Mormon engineer from Utah has hired a local public relations firm to make inroads in the Central Vermont communities where he hopes to construct a massive development.

Ellis Mills, a Montpelier firm run by Kevin Ellis and Bryan Mills, has started setting up meetings for David Hall, who plans to visit Vermont several times this summer.

Residents reacted with alarm in March, when a local blogger wrote about Hall's proposal to build a futuristic, environmentally sustainable community of 20,000 people at the hilly intersection of Sharon, South Royalton, Strafford and Tunbridge. The plan is based on a Mormon document known as the Plat of Zion.

By the time the news broke, Hall had already purchased about 900 of the 5,000 acres he says he needs. Vermont Public Radio reported in late April that Hall is acquiring another 500 acres.

Amid the outcry, Ellis saw an opportunity. "I called [Hall] up," said the inveterate lobbyist, who previously co-founded KSE. "I said, 'You need a guide.'"

In the weeks after Hall's plans became public, the engineer did his best to respond to concerns, assuring people that it would be years before his plan came to fruition. Despite his efforts, plenty of people remain staunchly opposed to the concept.

Ellis, who lived in Strafford for eight years and coached high school basketball in Sharon, knows many of the project's opponents well.

What does he think of Hall's vision?

"This may be a great idea," Ellis said. At a time when Vermonters are concerned about shrinking enrollment in schools, an aging population and depressed downtowns, he said, it's worth paying attention to a proposal "that would inject millions of dollars and lots of new people into communities."

Ellis said he currently has no plans to lobby for any legislative changes the project might require — he and Hall haven't discussed the possibility. Right now, he's focused on reaching out to local officials and residents.

"I think this is a discussion worth having, and I wanted to be in the middle of it," Ellis said.