Mormon Church Is Against Massive Settlement Plan in Vermont | Off Message

Mormon Church Is Against Massive Settlement Plan in Vermont 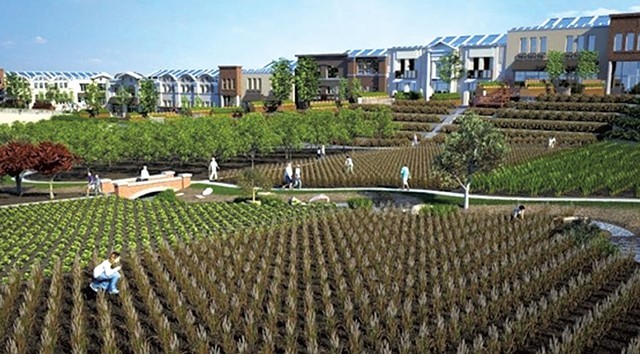 The Church of Jesus Christ of Latter-day Saints — also known as the Mormon Church — has come out against David Hall's plans to build a 20,000-person settlement in Vermont.

Hall, a wealthy engineer from Utah and a member of the LDS Church, says his futuristic proposal is inspired by a document drawn up by the religion's founder, Joseph Smith. But he has maintained — and church spokespeople have confirmed — that the church itself is not involved in the effort.

Hall's vision for mega-villages — or "NewVista communities" — has unnerved residents in the central Vermont communities where he has amassed more than 1,000 acres. He's also been buying property in Utah, alarming residents there as well.

The church declined to weigh in on the merits of the project when asked about it last spring. But on Tuesday it took a stance, telling the Utah newspaper Deseret News that it does not support Hall's plan. Church spokesman Eric Hawkins confirmed the decision to Seven Days on Wednesday.

"This is a private venture and is not associated with The Church of Jesus Christ of Latter-day Saints in any way," Hawkins said in a statement. "The Church makes no judgment about the scientific, environmental or social merits of the proposed developments. However, for a variety of reasons, we are not in favor of the proposal."

The church did not immediately respond to a request to elaborate on its statement.