More than 100 people jammed into a meeting room mostly to express dismay and outrage over a proposal to increase the height limit for a swath of downtown from roughly 105 feet to 160 feet, or about 14 stories, in order to accommodate the $200 million-plus proposed redevelopment of Burlington Town Center.

The Planning Commission members listened but did not vote on a zoning amendment proposed for a special district that encompasses the mall and a few surrounding buildings. The commission is under pressure to make a recommendation on the zoning change to the city council by early July in order to stay on a timeline set for the project in a predevelopment agreement. The council approved the agreement May 2.

During public comments that went on for two hours, some speakers supported the height increase as necessary to make a much-needed mall makeover happen. But they were strongly outnumbered by critics, many of whom carried signs that read: "Our Zoning For Our Community!"

The people, and not a developer, should be driving such a significant zoning change, numerous speakers said. "This is backwards," said Michael Long, a resident of Henry Street. The city should not allow the mall developer, Don Sinex, to demand a new and special set of rules for his project, Long said.

Many speakers said the low-rise profile and little-city feel of Burlington is part of what makes it unique and livable, with spectacular views of Lake Champlain and a sense of proximity to nature. They feared tall new buildings could cast big shadows, create traffic problems and change that character.

"Burlington does not need a Trump tower," said city resident Sue Burton, adding that a "14-story mega-building is out of the scale of the city."

A group called the Coalition for A Livable City had distributed 4,000 fliers across Burlington in the week leading up to the meeting to rally opponents of the height change. Many members of the new group were involved in recent battles to preserve open space at Burlington College and fight zoning changes in the South End that they feared could have made artist studio space more expensive.

Genese Grill, an artist and writer who lives in the Old North End, is an active member of the Coalition.* Grill was one of several speakers who suggested that allowing the taller mall would be just the beginning, and many more proposals for buildings above the current height limit would follow. "This is a watershed moment in Burlington history," she said. 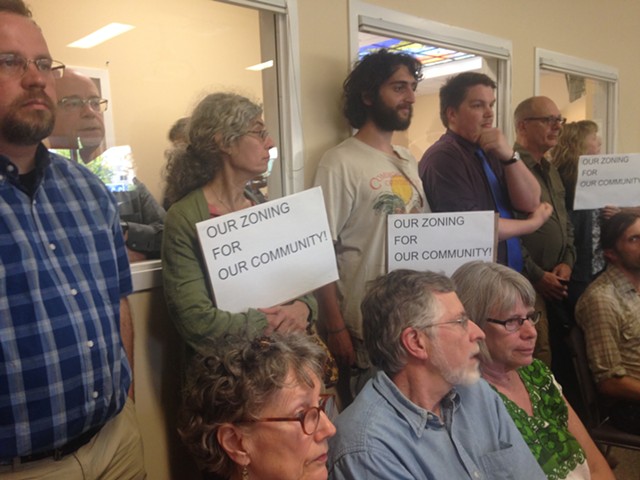 Nancy Kirby, a longtime resident of Burlington, was among speakers who said allowing taller buildings downtown could profoundly change the scale of a city. "I'm not against the mall ... I'm against the height," she said.

She added: "We have grandchildren and we want them to enjoy Burlington the way we enjoyed Burlington."

Solveig Overby also objected to the height change and urged the planning commission not to rush into the decision. She said she wanted the mall to be redeveloped, but not as proposed. And not under pressure. "I just am really disturbed by the process," she said. "Salesmen are really good at telling you the deal is off if you don't take it right now."

But others defended both the process and the mall project, pointing out that the developer has held a series of public meetings and taken input for more than a year. Jeff Nick, chair of the Church Street Marketplace Commission, said the project has strong support from downtown merchants. He held up a photo of the Masonic Temple building at the top of Church Street and said the historic structure measures 125 feet — not much shorter than the mall would be. "I believe what we're talking about is certainly appropriate in the context of our downtown," Nick said.

Jay Fayette, a senior vice president at PC Construction, said the project would create hundreds of construction jobs, revitalize downtown and boost the economy. "This is a renaissance project for the city and the state, and we must not let this opportunity slip through our fingers."

The predevelopment agreement on the mall makeover calls for tearing down most of the 1976 urban renewal-era structure that fronts Church Street and runs west along Cherry and Bank. The proposal would transform the aging retail center into a mixed-use project with 274 units of housing, office space, stores and a 925-space parking garage. (The current garage would be demolished.)

The mall design has changed several times. Early renderings showed two 14-story towers. More recent ones show three. Sinex says the design is not done and will change some more.

The predevelopment agreement gives Sinex a certain amount of leeway when it comes to how the proposal looks, but is specific in other areas.

City officials want to restore street connectivity that was blocked when the mall was built, for example. So the agreement calls for the reestablishment of St. Paul Street as a "60-foot-wide, through public street running between Bank Street and Cherry Street."

The project would be built in two phases. The first, to begin in 2017, would include the housing, parking and street improvements.

The Planning Commission's next meeting on the zoning amendment, a work session, is set for 6 p.m. June 9 at the police department conference room on North Avenue.

*Correction, May 25, 2016: This post was updated to correct Grill's role with the coalition.