Bookstock, the Woodstock-based "festival of words," usually happens every July. This year — the fest's 12th — the organizers had already booked 40 authors when the pandemic hit, according to programming director Pam Ahlen. They made the tough decision to cancel the live event and replace it with a series of free livestreaming author talks, dubbed Virtual Bookstock 2020, in partnership with Woodstock's Norman Williams Public Library.

Virtual Bookstock kicks off on Thursday, September 17, and continues monthly through the end of the year. The first guest is poet Reuben Jackson, in conversation with author Jenna Blum.

Jackson, who's also a jazz historian, music reviewer and educator, resides in Washington, D.C., where he's an archivist at the University of the District of Columbia’s Felix E. Grant Jazz Archives. For many years, he lived in Vermont and, from 2013 to 2018, was the host of Vermont Public Radio's "Friday Night Jazz."

At Bookstock, Jackson presents his 2019 poetry collection Scattered Clouds, which includes both his acclaimed lyric "For Trayvon Martin" and a series of poems devoted to a friend, the late barbershop owner Amir Yasin.

In 2017, Seven Days interviewed Jackson about Yasin, whose poetic posts were hugely popular on Jackson's Facebook page, leading some to wonder if he were actually Jackson's alter ego. "If people want to speculate, that's fine," Jackson told Dan Bolles for that story. "It's a funny relationship." 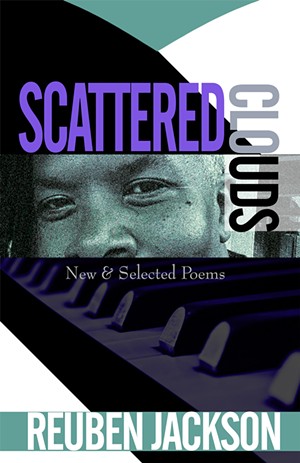 Ahlen expects Jackson to offer commentary on the poems and perhaps discuss his experience of being Black in Vermont, she said in a phone interview. Blum, who will facilitate the talk, is cofounder of A Mighty Blaze, a new initiative for authors deprived of the usual opportunities to meet their readers in person.

Live audience Q & A will be part of each of Bookstock's virtual events, which continue on October 15 with Jason Lutes of Hartland, author of the graphic novel trilogy Berlin. The winner of Comic-Con International's Inkpot Award and the Vermont Book Award, Lutes teaches at White River Junction's Center for Cartoon Studies. (Read Pamela Polston's cover story on him here.) He'll offer a PowerPoint presentation on his ambitious historical trilogy, Ahlen said.

On November 19, Bookstock will welcome François Clemmons of Middlebury, famous for his role on "Mister Rogers' Neighborhood" and author of the recent memoir Officer Clemmons. (Read Dan Bolles' cover story about him here.)

And on December 17, New York Times reporter Nikita Stewart will talk about Troop 6000: The Girl Scout Troop That Began in a Shelter and Inspired the World, her book about the first Girl Scout troop created for girls in the New York City shelter system.

Currently, the literary festival is scheduled to return in the second week of September 2021. It will no longer be paired with Woodstock's popular used-book sale, which will still take place in July.

With five venues and 1,000 attendees over three days in 2019, "the event was just too overwhelmingly huge," Ahlen said. "We're all volunteers." Bookstock has been growing steadily by word of mouth, she said, and book publicists now pitch their authors for the fest.

Ahlen said she likes the idea of making more events accessible online. "That remains to be seen, too, how we move forward."

The public can register here to attend the free Jackson event.
Prev
Next