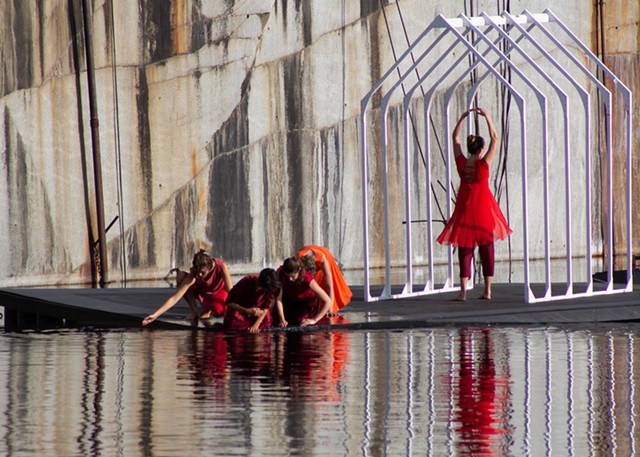 Hannah Dennison has created and produced dance pieces in the abandoned Rose Street Bakery, on the Waterfront, for the Flynn in Burlington and at the Kent Museum in Calais, among other sites. Her work, spanning more than 35 years, is highly community based, collaborative and innovative — and it has garnered her the 2020 Herb Lockwood Prize in the Arts.

Called by some the MacArthur Fellows of Vermont, the Herb Lockwood Prize honors “people who not only create their art at the highest artistic level, but have also nurtured the state’s other practitioners of that art,” according to a press release. Dennison received the $10,000 prize at an outdoor ceremony today at the BCA Center in Burlington.

“I was just astounded when I saw the photographs and videos from the rehearsals for The Quarry Project,” said Todd Lockwood of Dennison’s current work in progress. He named the prize for his late brother and is a member of the committee that chooses each winner. Launched in 2014, the prize has previously been awarded to actor and director Steve Small, artist and bookmaker Claire Van Vliet,  filmmaker Nora Jacobson, novelist Howard Frank Mosher, Bread and Puppet Theater founder Peter Schumann, and musician Robert Resnik. Burlington City Arts serves as the prize’s fiscal sponsor.

Todd Lockwood called The Quarry Project “stunning, national-level work.” Under development since 2016, it will take place in the Wells Lamson Quarry in Websterville sometime next year, incorporating live dance and music on stages floating on the flooded quarry. “It really knocked me off my feet,” Lockwood said.

"The other one that was really just visually astounding was Dear Pina at Shelburne Farms," he added. Dennison's 2012 dance/theater work in the vast Breeding Barn was a tribute to late German choreographer Pina Bausch.

In addition to lauding these works and others, he appreciates Dennison’s capacity to express Vermont history and stories through dance, to present dance creatively in public spaces, and to bring “dance to a lot of people who otherwise wouldn't ever have seen it.”

An educator, choreographer and performer, Dennison is the founding director of the nonprofit Cradle to Grave Arts. She has presented more than 15 works, taught hundreds of dancers, won prestigious residencies, received numerous grants, mounted gallery exhibits of performance artifacts, and forged creative partnerships with the likes of the Flynn, the Burlington Community Land Trust, the Woolen Mill, the City of Burlington, Shelburne Farms and the Vermont Department of Historic Preservation.

Because all Herb Lockwood Prize nominees are selected by an undisclosed group of 20 people from around the state, artists don’t know they’re being considered until contacted by Lockwood with news that they’ve won.

When Dennison received the call, she had to take a moment to weep, she wrote in an e-newsletter. Her win elicited many emotions, including “how fortunate I have been in my life that I can devote my time to this,” Dennison told Seven Days last week. “Most dance artists don't get here, in large part because it's hard to sell a dance to somebody: You can’t put it on the wall like a painting. Most dance artists don't have the luxury to be able to devote their time to their art form. They have to squeeze it in.”

She attributes her fortune to “a mash-up of luck and being in the right place at the right time.” A small inheritance allows her to “live very frugally,” Dennison said, and municipal support for the arts was abundant in Burlington in the late 1970s and early ’80s, when she began her dance career.

Sen. Bernie Sanders (I-Vt.), the city's mayor from 1982 to 1989, allowed the contemporary dance community to use the Memorial Auditorium loft for free, after we “cleaned out all the pigeon shit,” Dennison recalled. Peter Clavelle was equally supportive when he succeeded Sanders as mayor. “My civic partnership was very beneficial to getting where I got to,” Dennison said.

She also attributes her prolific career to countless artists and volunteers. When asked what she’ll do with the prize, her first thought was to “cut it into 10,000 little squares and hand them out to all the people who were instrumental in my getting to this point. Thousands of people have supported my work. It is very collaborative and very dependent upon others … The work turns out to be this fabric of all the people’s support.”

Just as others have bolstered and shaped Dennison’s work, so has she encouraged and nurtured fellow dance artists. “She attended shows by new groups, and she’d rush backstage after the show to bestow praise and fierce hugs,” states the press release. “She has caused all boats to rise in Vermont’s dance harbor.”

Lockwood emphasized that the prize comes with no strings. “They can do whatever they like with the money. It's an award, not a grant,” he said. Each year, roughly half the funds are provided by the Lockwood family and half by donors. Lockwood established the prize to give Vermont artists their due, he said, noting that people “well-off enough to be buying original art” didn’t expect to find it outside of New York City or Montréal. “I'd seen examples of work being done around the state that were every bit as compelling as work that I'd see in SoHo,” he added.

As Dennison looks to the future, she hopes that other Vermont dance artists receive the kind of help she did early in her career. Unconditional support from city government provided the time and resources needed to create high-quality work. “I would like to somehow be part of an effort to give time and space to dance artists to gestate their work for a bit longer” than they can often afford, she said.

As she reflected on her career, including the challenges of raising endless funds (she pays all artists for their rehearsal and performance time), Dennison recalled griping years ago that a $25 donation was too small. A friend said to her, “’You know, Hannah, you can do alchemy on that check. It's not money, it’s energy and love coming at you for what you're doing.’” Dennison still chokes up over the memory, and those words have guided her to this day.
Prev
Next