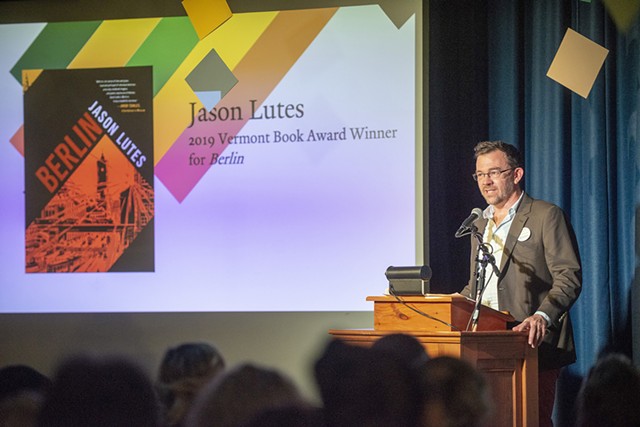 At a gala ceremony on Saturday night in Montpelier, the fifth annual Vermont Book Award was presented to Hartland cartoonist Jason Lutes for his 2018 graphic novel Berlin. It's the first graphic work to win the award, which is administered by the Vermont College of Fine Arts.

The $5,000 literary prize isn't the first award that Lutes, a Center for Cartoon Studies faculty member, has won for his work. In summer 2018, he received the prestigious Inkpot Award at Comic-Con International in San Diego, as Pamela Polston noted in a 2018 Seven Days cover story. She described the three-volume Berlin, which combines history and fiction to chronicle the rise of German fascism between the world wars, as "an astonishing accomplishment that represents a grand vision and more than 20 years' work."

“I felt grateful and honored for having my book nominated for the VBA, but the last thing I expected was to actually win," Lutes wrote in an email. "To work in solitude on a project for 22 years, and then to receive a standing ovation for that work from a roomful of strangers, was an unimaginable and deeply humbling experience. I could barely keep it together at the podium. It was a night I will never forget."

Besides the cash, Lutes will take home an award sculpture crafted by Luciana Frigerio, a Norwich artist who repurposed copies of The Best American Short Stories of the Century into a one-of-a-kind trophy.

Berlin was selected by a team of nine judges from among 10 finalists for the award, ranging from poetry to nonfiction to children's literature. Among them were The Great Believers by Rebecca Makkai (also a National Book Award finalist); The Season of Styx Malone by Kekla Magoon (also a Coretta Scott King Honor Book and winner of the 2019 Boston Globe—Horn Book Award); and The Animal One Thousand Miles Long: Seven Lengths of Vermont and Other Adventures, by Seven Days contributor Leath Tonino.

Vermont College of Fine Arts interim president Leslie Ward spoke at the gala; she was appointed last summer to succeed founding president and novelist Thomas Christopher Greene, who will return to the college's faculty in 2020 following a sabbatical.
Prev
Next