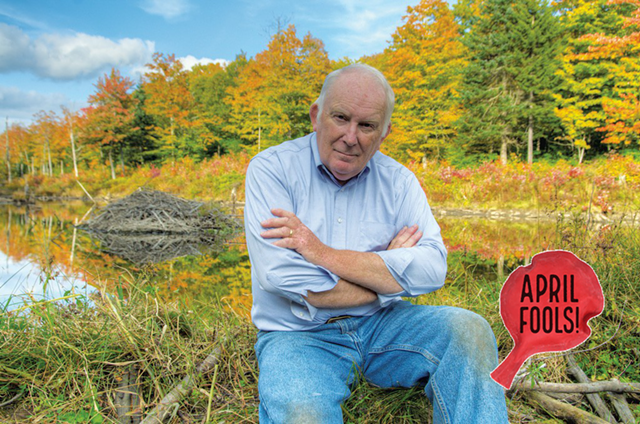 Now Mosher says it's time for a change of pace. And place.

"Look," he says in an exclusive conversation with Seven Days, "I love chronicling the Old Ways that make the Kingdom the Kingdom. Sugar making. Deer hunting. Gossiping on Town Meeting Day. Splitting of logs. Stuffing of wood stoves. General curmudgeonliness. But you know what? I think that's been done. The Kingdom has been fully chronicled, and my muse is calling me to warmer climes where people drive cars made in this millennium, get French manicures and never wear Carhartts."

"Don't expect any intricate, eloquent descriptions of hardscrabble folk living in harmony with the natural world in this book," the author assures us vehemently. "I went to LA for a couple of weeks once, and I can tell you that people there aren't even sure where the lettuce in Whole Foods comes from. So I took a new stylistic tack … let's call it Elmore Leonard on Adderall."

Mosher says his agent expects to pitch the novel to publishers as "Birdman meets The Girl on the Train." "With any luck, we'll sell film rights for seven figures," he adds. "Much as I love working with Jay Craven" — the local director who has adapted four of Mosher's novels — "I see this one as more of a project for David Fincher. Maybe with Trent Reznor scoring. You know, edgy."

When asked how Bright Lights relates to the rest of his oeuvre, Mosher takes some time to think. "I believe one of the characters eats pancakes with maple syrup at one point," he says at last. "At an all-night diner on the Sunset Strip. But I did specify that it's Vermont maple syrup. Call it an Easter egg for my local fans."

In other literary news, Chris Bohjalian has announced his plans to write a "gritty, urban, Vonnegut-esque satire" that will make absolutely no one cry; and Archer Mayor confides that he has a steamy vampire romance series in the offing, "because apparently that's what the kids like." None of those books will be set in Vermont, either.