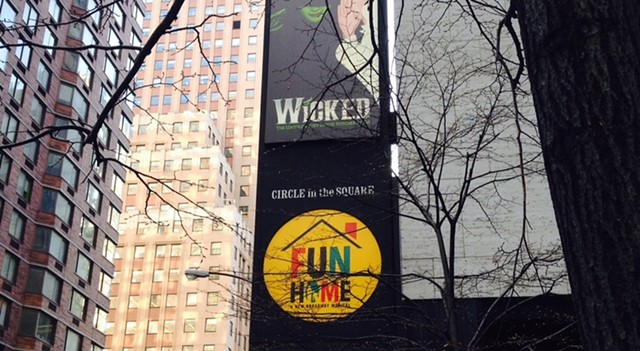 Vermont cartoonist Alison Bechdel's star just got even shinier. The musical based on her graphic memoir Fun Home was nominated for 12 Tony Awards!

As reported in the New York Times and elsewhere today, Fun Home is in the running for the following:

The nominations come on the heels of Fun Home's triumphant opening night at New York City's Circle in the Square Theatre. I wrote about the experience of seeing the show last week, and Seven Days multimedia producer Eva Sollberger produced an [un-]Stuck in Vermont video, as well.

Though Bechdel was not involved in creating the musical interpretation of her life story — a story that involves her coming out as a lesbian and her closeted gay father's suicide — her brilliant memoir catapulted her on this remarkable career trajectory. "I'm not fully inhabiting this yet," Bechdel told me in New York. "It's an amazing experience."