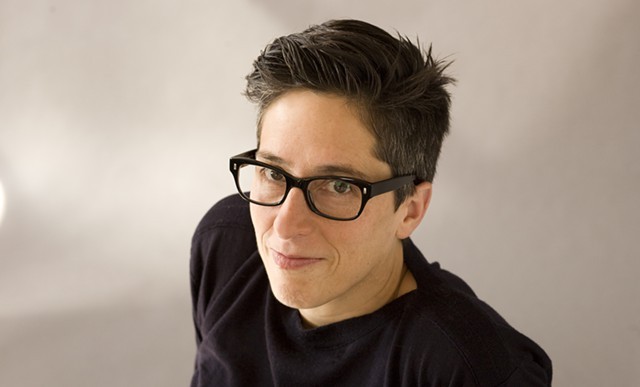 It was another news-making week for Vermont cartoonist Alison Bechdel. As Seven Days has reported, in the last year the off-Broadway musical adaptation of her best-selling graphic memoir, Fun Home, was a finalist for the Pulitzer Prize in Drama, and Bechdel was awarded a MacArthur Fellowship, aka "genius" grant. Just last month, the Broadway production of Fun Home received a whopping 12 Tony nominations.

This had barely sunk in when Bechdel received news about another award. Only it wasn’t for her or Fun Home. The news came from legendary comic artist Art Spiegelman. Something unprecedented had taken place at the PEN American Center — the New York City-based organization with the mission of advancing literature, defending free expression and fostering international literary fellowship.

The group’s annual gala was scheduled for Tuesday, May 5, at the American Museum of Natural History. One of the evening's highlights was to be the presentation of PEN's Toni and James C. Goodale Freedom of Expression Courage Award to French satirical magazine Charlie Hebdo. Twelve people were killed at that publication's Paris office last January by gunmen in protest of its frequent depictions of the prophet Muhammad.

But at the last minute, six PEN members announced they would boycott the ceremony in protest of the Hebdo honor. Spiegelman stepped in to co-host the event, and asked Bechdel and comic artist Neil Gaiman to join him. They did, along with three authors.

The sextet who stepped down were top-tier authors Peter Carey, Francine Prose, Teju Cole, Rachel Kushner, Taiye Selasi and Michael Ondaatje. Notably, none of the protesting voices belonged to a cartoonist. So what could distinguished members of an organization devoted to preserving freedom of expression have been thinking? Well, according to the April 26 petition, this:

“We do not believe in censoring expression,” the document explained. “An expression of views, however disagreeable, is certainly not to be answered by violence or murder. However, there is a critical difference between staunchly supporting expression that violates the acceptable, and enthusiastically rewarding such expression. … [By bestowing this award], PEN is not simply conveying support for freedom of expression, but also valorizing selectively offensive material; material that intensifies the anti-Islamic, anti-Maghreb, anti-Arab sentiments already prevalent in the Western world.”

“To be honest, if these people had come to me first, I probably would have signed on with them,” Bechdel wrote in her blog last Monday. “Not because I’m weak-minded and easily led, though I am, but because both sides of this debate make some really good points.

"But I got the call from Art, in an email whose subject line read “Cartoonists’ Lives Matter.” And I’m goin’ to the gala. What it comes down to for me is that it’s possible to separate the award — which is for courage, after all — from editorial content.”

Meantime, Gaiman fumed, ”'You don’t understand the nuances,’ some people say. I don’t give a fuck about the nuances. Charlie Hebdo showed up to work in 2011 after they were firebombed, and kept working to put out an issue. And they continued and put out an issue after 12 murders. As far as I’m concerned, this is the [precise] award for courage for cartoonists.”

Not all prize-winning comic artists share that view. The controversy was stoked by surprisingly anti-PEN sentiments from the likes of “Doonesbury” creator Garry Trudeau. In his George Polk Award speech in April, he drew criticism from many in the media for saying that “by attacking a powerless, disenfranchised minority with crude, vulgar drawings closer to graffiti than cartoons, Charlie wandered into the realm of hate speech.”

Then, muddling matters even further, came last Sunday’s fatal shooting in Garland, Texas, at an event in which cartoonists competed for a $10,000 prize for the best rendering of Muhammad.

“It’s good to have so much thoughtful conversation going on about the complicated dynamic between free speech and hate speech, between fundamentalism and xenophobia,” Bechdel reflected in her blog. "Violence is intended to polarize. I want to try and resist that.”

Happy endings aren’t the norm when it comes to stories on this subject, but that’s what Spiegelman, Gaiman and Bechdel helped make happen on Tuesday with their bold display of solidarity. Accepting the award to a standing ovation, Charlie Hebdo’s editor-in-chief Gérard Biard observed that the magazine’s content helped combat extremists who would limit free speech. “Fear is the most powerful weapon they have,” he said. “Being here tonight, we contribute to disarming them.”

“I was surprised by the heavy police presence outside,” Bechdel said when asked for her impression of the evening. “I don’t know if that had been planned all along, or if it was heightened because of the attack in Texas on Sunday. There were also lots of reporters there because of the PEN controversy,” she added.

“Other than that, it was a very civil gala. If anyone refused to clap for Charlie Hebdo, I didn’t notice them. I’m really glad I went. It was awesome having dinner in the Hall of Ocean Life under that giant blue whale.”

Now PEN just has to figure out what to do about that elephant in the room.