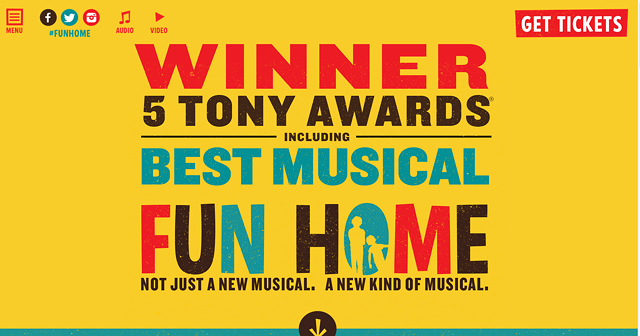 If you didn't stay up late to watch the Tony Awards, or read about the winners this morning, perhaps we can break the happy news to you that Fun Home won for Best Musical!

The show, currently on Broadway at Circle in the Square Theatre, also won for Best Direction of a Musical (Sam Gold), Best Original Score (Lisa Kron, lyrics, and Jeanine Tesori, music), Best Book (Kron) and Best Leading Actor in a Musical (Michael Cerveris). It was the most awards for any single musical production in the 69th Tonys, broadcast last night on CBS. Also, by the way, it is the first time an all-female team has won best score. 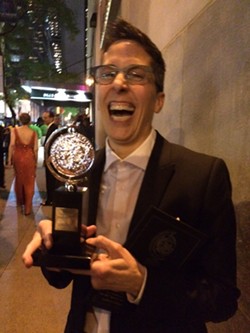 We could not be happier for Vermont cartoonist Alison Bechdel! Her best-selling graphic memoir Fun Home: A Family Tragicomic is the basis for this most unlikely musical, in which the lead character comes out as a lesbian, and her father comes out, too. And then commits suicide by walking in front of a truck.

But as various critics have said in various ways, everyone has a dysfunctional family — and everyone can relate, in some way, to Fun Home. It helps, of course, that the music is just extraordinary, and the cast — right down to the little brothers, one of them played by Vermonter Oscar Williams — is, too.

For a quarter-century, Bechdel penned the comic strip "Dykes to Watch Out For" (carried by Seven Days, among many other alt weeklies). She sure couldn't have guessed back then that she was the one to watch out for.