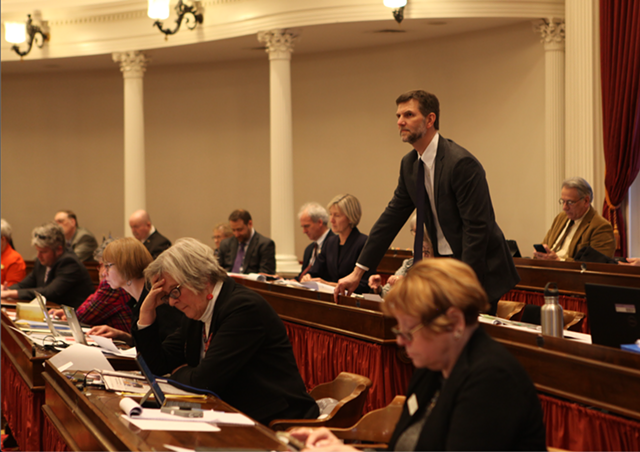 Vermont lawmakers advanced the centerpiece of their climate agenda on Thursday as a key committee approved a bill intended to sharply reduce pollution from fossil fuels used to heat homes and businesses.

The House Energy and Technology Committee approved the creation of a “clean heat standard” program by a vote of 7-2 after weeks of technical, and at times contentious, testimony.

Rep. Tim Briglin (D-Thetford), chair of the committee, said the bill had been a "heavy lift" but would ensure the transition to lower-carbon fuels was "coordinated, sustained and predictable" for fuel buyers and sellers.

Waiting to act will only leave Vermonters with fewer options, he said.


"In 10 years, if we do nothing, we're going to be faced with things that are more costly, less equitable and more disruptive," Briglin told Seven Days.


Many see the bill as the most consequential piece of climate legislation this session, one that would fundamentally transform a heating fuel sector that accounts for 34 percent of the state’s greenhouse gas emissions.


“For the first time ever, this is going to require fossil fuel companies to actually be part of transitioning Vermont to a low carbon economy,” said Ben Edgerly Walsh, climate and energy program director at the Vermont Public Interest Research Group.

The bill requires the Public Utility Commission to come up with regulations that would shrink emissions from the heating sector while growing the market for renewable or lower-carbon heating alternatives. About 72 percent of buildings in Vermont are currently heated with fossil fuel.

The new program would require wholesalers and some retailers of fossil fuels for heating — not gasoline or diesel for vehicles — to fund the expansion of clean heat and energy efficiency efforts. It would do so by requiring them to buy or generate a gradually increasing amount of “clean heat credits” every year.

The needed credits would be proportional to the previous year’s fossil fuel sales. For example, a fuel oil dealer selling 1 million gallons of home heating fuel per year might be required to obtain credits to offset 5 percent of sales in the first year, or 50,000 gallons, and 10 percent the following year, or 100,000 gallons.

Dealers could decide to meet the requirements by selling less fossil fuel, such as by offering biofuel. Or, companies that don't adjust could pay a fee that would fund a program for other organizations to do clean heat projects — weatherization work or installation of lower-carbon alternatives such as pellet stoves and electric heat pumps.

Regulators would set the actual percentages of credits needed annually, and calculate how many credits would be assigned to different clean energy projects. The goal is to have the obligation increase every year until the tradable credits equaled a 40 percent emission reduction by 2030.


The effort is similar to a suite of regulations passed several years ago, known as the renewable energy standard, that have successfully required utilities to reduce their carbon footprint and expand their use of renewable energy.

That program, as well as the creation of Efficiency Vermont in 1999, represent two significant steps toward reducing emissions, but the clean heat standard is even more ambitious, said VPIRG's Walsh.

“This is the first time in Vermont that we will actually put in place a mechanism for an entire energy sector to actually hit our climate requirements,” he said.


Reining in emissions has taken on greater urgency since the passage of the 2020 Global Warming Solutions Act, which turned the state’s laudable emission reduction goals into legal requirements.

Lawmakers Override Scott's Veto of Global Warming Solutions Act
By Kevin McCallum
Off Message
Following the collapse of a multi-state effort to reduce transportation emissions, the clean heat standard is considered by supporters to be the state’s best shot at cutting emissions 15 percent by 2025, 40 percent by 2030 and 80 percent by 2050.

“Right now, this is the highest impact, most important policy recommendation that Vermont can move on to meet our climate responsibilities,” said Jared Duval, a member of the Climate Council and expert in climate emissions.

The bill requires the Public Utility Commission to begin the process of crafting the rules for the program by August 31, 2022, and authorizes the hiring of a consultant for public outreach efforts.

Those would include hiring a facilitator to hold at least six public meetings in six different parts of the state, conduct polling, and hold two workshops for a wide range of groups directly affected by the law. The bill proposes spending $1.2 million on the public outreach and regulatory process.

The rules would need to take effect by January 1, 2025. Though designed to be flexible enough to allow fuel dealers various ways to adapt to selling new fuels or heating services, many still view it as an unwarranted government overreach, said Matt Cota, a lobbyist who serves as executive director of the Vermont Fuel Dealers Association.

“There are absolutely some fuel dealers who see the clean heat standard as the government putting them out of business,” Cota told Seven Days. “For many companies, this is an existential threat.”

While some fuel dealers would be able to capitalize on the coming transition, Cota fears as many as half of the approximately 100 operating in the state, especially the smaller ones, wouldn't survive.

“Some companies will thrive, others will be done,” Cota told lawmakers last week.

The bill needs another stop at the House Appropriations Committee before an expected favorable vote on the House floor after lawmakers return to Montpelier following next week’s Town Meeting Day break.

Then it would head to the Senate for another round of debate. If passed, it’s unclear if Gov. Phil Scott will support the bill.

He vetoed the Global Warming Solutions Act in part because it gives people a path to sue the state if it fails to meet the reductions, but lawmakers forced it into law with a rare override vote. Several of Scott's appointees to the Climate Council agree the bill is needed to meet the state's emission requirements.
Prev
Next