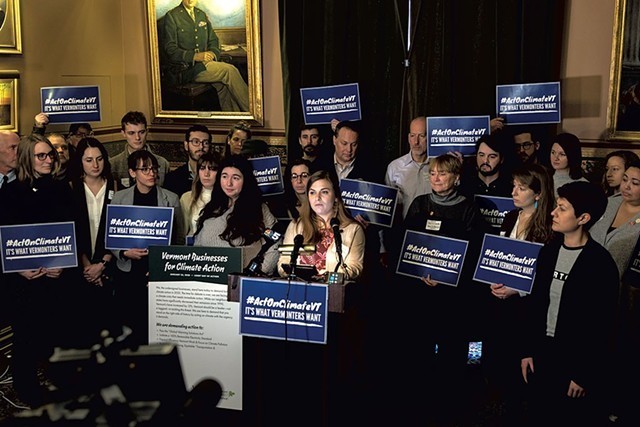 Lawmakers forced a contentious climate bill into law over the objections of the governor Tuesday, a move meant to ensure the state meets its aggressive greenhouse gas emission reduction goals.

The Senate voted 22-8 to override Gov. Phil Scott’ veto of H.688, the Global Warming Solutions Act, enough to win the two-thirds approval needed in the chamber. The House did the same last week with a 103-47 vote.

Unlike House members, however, senators chose not to debate the merits of the override, instead moving straight to a vote without comment.

The vote is the second successful veto override of the extended legislative session. The first was when the legislature overturned Scott's veto of an increase in the minimum wage in February.

Supporters say the state’s history of failing to meet its greenhouse gas reduction promises and recent rises in emissions make it imperative the state do more to achieve its goals.

Despite some progress, Vermont is the only state in New England with higher emissions than it had 30 years ago; the state also has the highest per-capita emissions in the region.

Critics of the bill, led by Scott, have said they support the state’s targets but object to how the bill seeks to hit them. The measures include allowing people to sue the state over missed targets, and the creation of a 23-member Vermont Climate Council to come up with a comprehensive plan to attack the problem.

Behind the opposition is the fear that a sweeping transformation of the transportation and energy sectors is needed to wean the state off of fossil fuels and hit the targets.

Scott, a passionate race car driver, has expressed optimism that the rapid advancement of electric vehicle technology would help the state put a dent in its transportation emissions in coming years.

He has touted programs to help accelerate the development of electric trucks and buses, as well as financial incentives to help people purchase electric vehicles. The $1 million in incentives in the current budget join a litany of state programs designed to help people winterize homes, install solar panels, and switch to more efficient heat sources such as electric heat pumps and wood stoves.

But many worry such measures don’t go far enough to create the incentives people need to switch to renewable, lower carbon energy sources quickly enough to avoid the catastrophic effects of the climate crisis.

Following House approval of the override last week, Rep. Tim Briglin (D-Thetford), chair of the House Committee on Energy & Technology, sought to link the COVID-19 pandemic to the climate crisis.

"If we have learned anything from the pandemic of the last six months, we know hope is not a strategy. Neither is fear," Briglin said in a statement. "The climate crisis is upon us. We need to plan. We need to prepare. And, we need our government to be accountable.”
Prev
Next