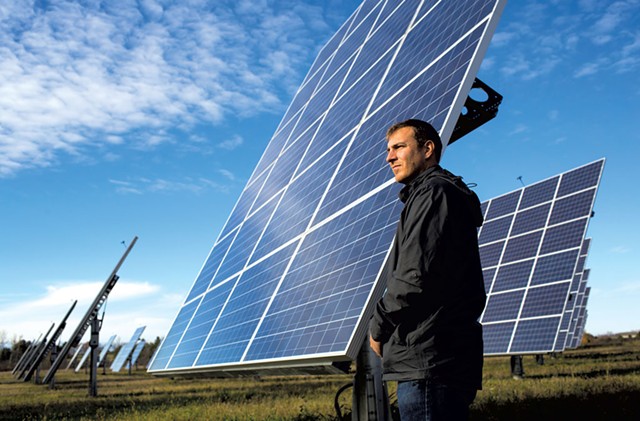 The Vermont Climate Council on Wednesday adopted a sweeping plan heralded by some as a milestone in the drive to reduce emissions but assailed by Gov. Phil Scott as born of an "overzealous process."

After a year of effort, the 23-member council, charged with ensuring the state meets its ambitious climate goals, voted 19-4 to adopt the plan.

The sweeping document outlines dozens of strategies the state should employ to more aggressively cut climate pollution, prepare residents for more extreme weather events, educate the public about ways to reduce emissions and ensure the costs of the transition are shared equitably.

The plan leaves significant issues unresolved, however, such as how to wean Vermonters off gas-powered vehicles and limit burning wood to make electricity.

“Today is not the end, it’s the beginning,” said state climatologist Lesley-Anne Dupigny-Giroux, a member of the panel.

While acknowledging significant work lay ahead, panel members praised the 273-page “initial plan” as a vital roadmap not only to cut emissions but protect the state's industries, communities, infrastructure and people from the impacts of changing climate. A summary of the plan is available here.

Council member Jared Duval said the plan “represents Vermont’s first serious attempt to act at the scale and pace necessary to do our part, not only in meeting the science-based imperative of reducing climate pollution, but also the moral imperative to our fellow Vermonters, and all of humanity, to transition beyond fossil fuel use and help reduce both the direct and indirect costs of our energy use.”

Duval , the executive director of Energy Action Network, an organization that tracks the state’s progress toward its climate goals, said he believes that plan can both meet the state’s emission targets and strengthen its economy. Others are less convinced. In a press release issued moments after the vote, Kristin Clouser, Scott’s interim secretary of administration and chair of the council, lambasted the plan as being ambiguous and lacking cost analyses.

“Economic impact is human impact, and there simply hasn’t been enough time to accurately estimate and understand the cost of the recommended actions, individually and cumulatively,” Clouser wrote. “We cannot support proposals which impose a fiscal commitment beyond the means of most Vermonters.”

The press release reflected the Scott administration’s acute unease with the panel’s work, which was set in motion by last year’s controversial Global Warming Solutions Act.

The act makes those goals legally binding. Scott balked at what he viewed as such a heavy-handed approach, but legislators overrode his veto, and the law went into effect.

Administration officials participated in the time-consuming work of the panel, but effectively under protest. At one point a top official raised the prospect of a lawsuit to block the plan on the grounds it encroached on the governor’s executive authority.

The final vote underscored the administration’s somewhat conflicting position on the plan, with four state officials voting in favor, four against. Council members have until next week to file dissenting opinions to be included in the plan. Council member Catherine Dimitruk said she was saddened to see the administration publicly critique the work.

Even strong supporters acknowledged reservations with the process, the final product and the prospects of full implementation.

“While the plan falls short in some ways and far more work must be done to engage Vermonters and turn the policies advanced in this plan into real, tangible actions, its adoption lays the foundation for Vermont to finally treat this crisis with the seriousness it demands and get on track to meet our climate requirements,” Ben Edgerly Walsh, director of the Climate & Energy Program for the Vermont Public Interest Research Group, said in a written statement.

Panel member Johanna Miller, the director of the Energy & Climate Program at the Vermont Natural Resources Council, told Seven Days that passing the plan was “a big deal"but its transportation goals still look unattainable at this time.

Transportation represents 40 percent of emissions in the rural state, and many had been counting on Vermont to join the regional pact known as the Transportation Climate Initiative, or TCI.

The idea was to impose a surcharge on gasoline sold in participating Northeast states, and funnel the revenue back into transportation programs to reduce emissions, such as electric vehicle incentives, rail projects and electric buses. But Massachusetts and Connecticut recently opted out of TCI, and its future is uncertain.

“Frankly, without it, the plan doesn’t add up as it's statutorily obligated to do,” Miller said.

That’s one of the reasons the plan is dubbed “initial,” and the council gave itself until the spring to come up with better options for the transportation sector.

“We have to have solutions to move people into cleaner vehicles or to give them efficient, cost-effective options to get where they need to go,” Miller said. “We fundamentally lack those tools.”

The council similarly granted itself several additional months to address the issue of biomass energy. The subcommittee charged with looking into the use of wood for heating and energy production ran out of time to research the complex subject. Lots of Vermonters still heat their homes and businesses with wood. Two major electricity plants, in Burlington and Ryegate, burn wood chips, a significant source of emissions but one, proponents argue, that is local and renewable

Zack Porter, director of Standing Trees Vermont, which advocates for preserving more forestland, said the plan was “far from a leap forward” because it doesn’t do enough to protect forests, which absorb carbon. He said the plan needs to do more to “end Vermont's reliance on dirty biomass electricity that pollutes our communities, destroys our forests, and adds more carbon to the atmosphere than burning coal.”

Many of the objectives and strategies outlined in the plan are not new. They include better insulating and more efficiently heating homes and buildings, increasing incentives for people to buy electric cars, and building a wider charging network to make EV ownership more convenient.

The plan also proposes more compact land development so people don’t have to drive long distances in the first place, and encourages more environmentally friendly agricultural practices, such as using cover crops to sequester carbon in soil and reduce erosion from intense storms.

Several council members took time Wednesday to applaud their colleagues but also to express what a slog the process had been.

In addition to monthly meetings on Zoom that often lasted entire days, the members worked on subcommittees to draft recommendations and perform analysis, research and editing themselves.

Chris Campany, executive director of the Windham Regional Commission, calculated that he had spent 340 hours on the plan so far this year. Abbie Corse, a Whitingham dairy farmer, got emotional describing how hard it had been to serve on the council.

Members received just $50 per council meeting. At times Corse had to duck out for childcare, or wait for large files to download through a slow internet connection.

“This has taken an enormous toll to me, on my farm, on my family, to be a part of this process,” she said.

She said she stuck with it to ensure that working Vermonters have a voice in policies affecting their futures.

“I think it is exactly the people like me that need to be here. And they’re not here,” she said. “Because that is not feasible unless you have a massive amount of privilege."

Editor's note: This story has been updated to reflect Miller’s position that without TCI, the plan does not yet contain solutions to reduce transportation emissions as required.
Prev
Next