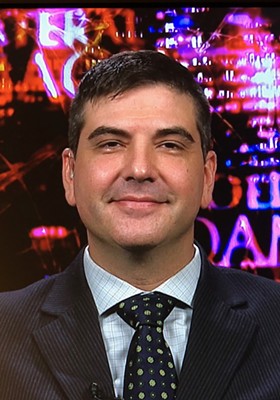 Burlington Republicans have nominated Christopher-Aaron Felker to be their candidate in the upcoming Ward 3 city council election.

About a dozen members of the Burlington GOP unanimously endorsed Felker, the party's only candidate, during a meeting on Zoom on Friday evening.

The vote comes just three days before candidate petitions are due for the August 17 contest. The special election was called when former Progressive councilor Brian Pine stepped down last month to run the city's Community & Economic Development Office.

Felker said he plans to make the most of the quick, two-month race.

"We have a solid ground campaign, and it's about working and building a better Burlington together, and we can do that," Felker said. "We're going to unite our community."

Felker, who has lived in Burlington since 2013, said he would focus on housing, improving infrastructure and creating a "positive policing policy" in the city if elected.

Felker said many of the current councilors are "good, honest, caring people" but that they make hasty decisions. As an example, he pointed to a ballot item that passed in March, which will allow the city to regulate thermal energy systems by assessing fees on carbon emissions.

"These ordinances and these charter changes have ramifications that will have a direct impact upon families and households here in the Old North End and in Ward 3," Felker said. "And the ripple effect and unintended consequences are, eventually, we are going to have higher rents."

Felker declined to discuss his policy plans in depth until after his official campaign launch next week.

The candidate joins an already robust field. Five people are seeking the Progressive nomination — Ryan Addario, Chris Haessly, Julie Macuga, Joe Magee and Owen Milne — and the winner of that contest will be announced Saturday evening. Milne has also won the Democrats' endorsement. Anyone choosing to run as an independent has until Monday to file a petition.

Progressives have held Ward 3, which covers a large portion of the city's downtown and the Old North End, for decades, but the Republicans virtually assembled Friday said they were confident in Felker.

One Prog Drops Out and Another Joins Burlington's Ward 3 Council Race
By Courtney Lamdin
Off Message
"People have this feeling of despair that we cannot win," former council candidate Ericka Redic said. "This is absolutely, 100 percent a winnable seat. We can do this if everybody works together."

Interim party chair David Kirk, a former Burlington school commissioner, said the GOP wants to become more active in city politics. The Burlington party has less than two dozen members, but the chapter is growing, Kirk said. Felker, who identifies as a conservative libertarian, just joined the party this year.

"It's very difficult to find people willing to run," Kirk said, describing council service as time consuming and taxing on councilors and their families.

"The goal for me is to build community, build inclusiveness, stop the bickering and the fighting," he continued. " We can all get along, because we all really care about the community."