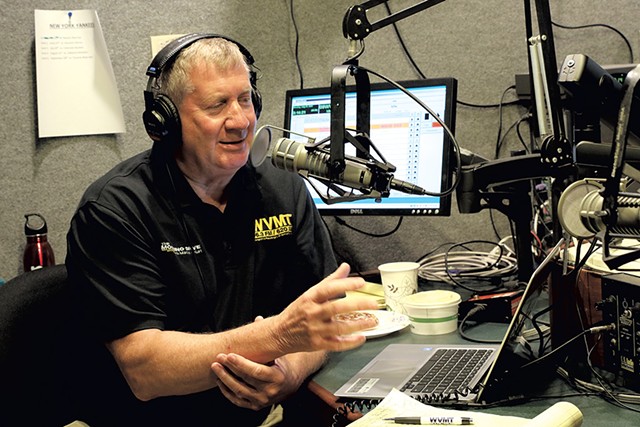 "It was an incredibly tough call," Wright announced on his radio show, WVMT's "The Morning Drive," on Thursday. "I don't make this decision lightly, and I don't feel great about it, but I think for now, I am out of politics as of the end of March."

Wright has served the New North End for nearly 25 years as a city councilor, state representative or both. After losing his House seat to Democrat Bob Hooper last fall, Wright vowed he wouldn't run again for political office. But he said he'd reconsidered in recent months after his council constituents urged him to stay on.

Wright's new talk radio gig, however, posed a problem. Federal broadcasting rules require that WVMT must afford equal time on-air to both Wright and his challenger, Sarah Carpenter, during a campaign. That wasn't feasible, so station ownership told Wright he'd have to take a 60-day hiatus from the airwaves. It was too long a break, he told listeners.

Mixed Signals? Burlington City Council Prez Kurt Wright Is a News Talk Radio Host
By Courtney Lamdin
Media
"I know I am probably letting down a lot of people who have asked me to run, who asked me to continue to be a voice for them," Wright said on-air. "But I really think the best thing right now is for me to come in and do my job here every day."

Carpenter earned the Progressive endorsement for Ward 4 at the party's caucus Wednesday night at Edmunds Elementary School. She also plans to seek support from Burlington Democrats when the party caucuses in January.

"I believe I can bring some fresh perspective," Carpenter told Seven Days on Monday. She retired last year after two decades at the helm of the Vermont Housing Finance Agency.

Burlington City Council Candidates Line Up to Unseat Incumbents
By Courtney Lamdin
Off Message
Wright said he may someday enter politics again, but he anticipated a tough race against Carpenter. With a presidential election in November 2020, Wright said, he expects another "blue wave" will bring more liberal-minded voters to the polls.

A caller shared the same concern on the air: "We might as well get the hell outta dodge, too," he told Wright, "because we’re not gonna have a voice anymore."

Burlington Republican Party chair Kolby LaMarche told Seven Days on Monday that the GOP hasn't scheduled a caucus. The party's only potential candidate on the ballot, he said then, was Wright.

On Thursday, Wright thanked his constituents for their years of support.

"I will continue to work for the citizens up until my last meeting," he said, adding, "It's been the honor of a lifetime."
Prev
Next