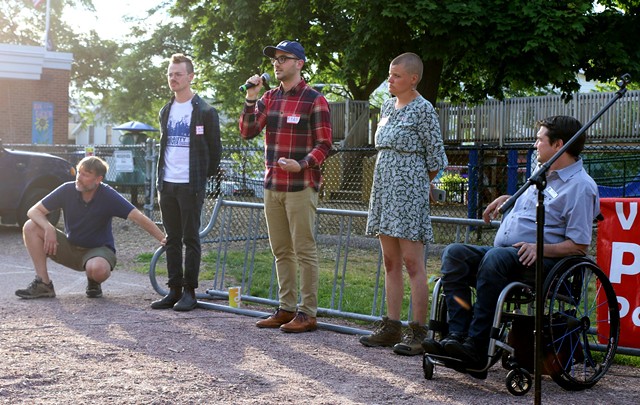 There are still five Progressive candidates in the running for the vacant Ward 3 council seat in Burlington, but the lineup changed as of Thursday evening.

Elmwood Avenue resident July Sanders, who participated in last week's candidate forum, has dropped out of the race. Sanders told Seven Days that she has family commitments that require her to leave town often, and she realized it wasn't the best time to serve.

"Seeing just the great slate of candidates, I didn't feel that it was so bad that I step away," Sanders said.

Five Candidates Vie for Prog Endorsement Ahead of Burlington Special Election
By Courtney Lamdin
Off Message
Thursday evening, a new candidate had emerged in Chris Haessly, a College Street resident who volunteered himself for the seat at the party's nominating caucus.

"I wasn't really planning to be here today," Haessly told the small crowd gathered in the Sustainability Academy parking lot in the Old North End, noting that several residents encouraged him to run. "I've always considered myself a longtime, big P Progressive, so I figured I'd throw my hat in the ring."

A former Burlington school commissioner, Haessly said he's passionate about affordable housing and believes in rent stabilization. He said the city should "take ownership" of the CityPlace Burlington site downtown, where a large multi-use development has been stalled for years, and build a new project to lease to a private developer.

"We have an ongoing revenue stream for the city, which we can use for things like infrastructure, like the sidewalks, like the sewers or roads," he said.

Haessly also said that the city is over-regulated, pointing to the cost of obtaining permits for operating a food cart downtown or making improvements to a business as "a barrier to entry to lower-income people here." 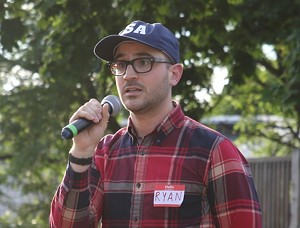 Addario, who works as the development and marketing coordinator for the Lyric Theatre, said he would seek to bridge differences between the Progressives and Democrats on the council. He said he's running for office because he realized that his quality of life in Burlington "is so out of reach for so many of our neighbors."

Magee, a self-described socialist who worked on both of Sen. Bernie Sanders' (I-Vt.) presidential campaigns, said his values of social, racial and economic justice would guide his work on the council. 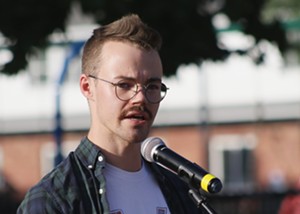 "For too long, the city has responded to the concerns of the wealthy and well connected while working families have shouldered the burden that has grown heavier year after year," he said. "And I am running to really be a voice for those folks, because I think that's been lost."

Macuga pledged "to work towards large-scale system change" if elected. A former field organizer for environmental advocacy group 350VT, Macuga said she wants to dismantle white supremacy and address inequality in city government by reallocating city funds — particularly the police budget — to help homeless residents, repair schools or "just about anything else."

"We've got to be a little bit more bold and a little less scared than we have been in the past," she said. 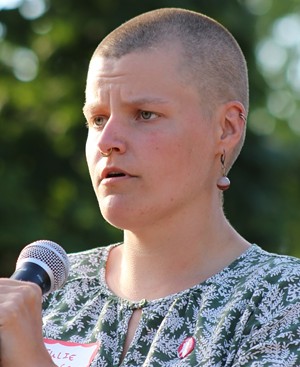 Milne, the executive director of the Lake Champlain Sailing Center on the waterfront, said he would bring "the voice of the people" to the council. Asked about CEDO, which Pine now runs, Milne said he thinks the office should return to its roots and "serve the social needs of the people" instead of operating as the city's development arm.

Milne is the only candidate seeking nominations from two parties. He effectively won the Democrats' endorsement earlier this week, since he was the only candidate to sign up by the party's deadline. Burlington Democratic Committee chair Adam Roof told Seven Days that three other candidates were interested in running but stepped back "because Owen is a strong candidate."

Ward 3 Progs will have until Saturday at 7 p.m. to cast electronic ballots. In true Prog fashion, the election is being conducted with ranked-choice voting, a system that allows voters to rank candidates in order of preference. If no candidate receives a majority of votes, lesser-ranked choices come into play to determine a winner.

The victors of each party's caucus will go head to head in the August 17 special election, along with any independents who may emerge before the petition deadline on June 21.
Prev
Next