A Just Cause? Landlords, Tenants Battle Over Burlington Eviction Proposal | Off Message

A Just Cause? Landlords, Tenants Battle Over Burlington Eviction Proposal

An item on the ballot this Town Meeting Day asks Burlington voters whether the city should change its charter to ban these “no-cause” evictions. If it passes, the measure would also need approval from both the legislature and the governor before becoming local law.

The proposal has broad support from tenants’ rights groups, including members of the Burlington Tenants Union, who say landlords should have to provide a “just cause” before sending them packing. Vermont Legal Aid estimates that nearly 370 Chittenden County residents were evicted annually during the last five years for no stated reason.

“We believe every tenant in Burlington deserves the right to stay in their home without the stress of eviction just because landlords have the right to say, ‘You must leave,’” Christie Delphia, a tenants union organizer and renter, said during a virtual town hall on the topic last week.

Landlord advocates, however, say property owners need no-cause evictions to get rid of tenants who are simply not a good fit. And they worry that a provision of the proposal would hamper their ability to increase rents each year.

“I don’t think that this just-cause ordinance is going to fix the things the advocates say it’s going to fix,” said Angela Zaikowski, director of the Vermont Landlord Association and an attorney who represents landlords in eviction proceedings. “I think it actually has the potential to make it harder to find a place to live in Burlington.”

With ballots already in the mail to every active, registered voter ahead of Town Meeting Day on March 2, the debate is heating up in Burlington, where the majority of residents are renters.

Queen City voters first considered a just-cause eviction ordinance in 1988, but it failed at the polls that November. The issue resurfaced in 2019, after Mayor Miro Weinberger’s daylong housing summit. Some renters who attended felt the event did little to address their concerns. They then approached a Burlington City Council subcommittee that handles quality-of-life issues and convinced them to draft a proposal for a charter change. The full council later voted 10-2 to put the question on the ballot.

Under the proposal, landlords could evict tenants for breaking the law or the lease — those are considered “just causes” — but they would not be allowed to evict a renter just because their lease is ending.

Renters living in owner-occupied duplexes or triplexes could still be evicted for no cause, as could tenants living in rentals that need repairs or are being taken off the rental market. Other just causes would be spelled out in a future city ordinance.

City Councilor Brian Pine (P-Ward 3), who helped write the proposal, said the city needs a just-cause ordinance to level the playing field between renters and landlords.

“That relationship is inherently an unequal relationship and doesn’t have a level of security or surety for the tenant,” Pine said. A just-cause ordinance “is providing those tenants who are abiding by the lease and paying their rent and not disturbing neighbors … with some level of protection.”

City Council President Max Tracy (P-Ward 2), who is running for mayor, said he supports the measure because he thinks rule-abiding tenants shouldn’t be forced out of their homes. Fellow mayoral candidate Councilor Ali Dieng (I-Ward 7) is also on board, citing similar reasons. Weinberger’s campaign team said on Friday that the mayor "does not have a public position on the ballot item itself," though Weinberger did say he supports renter protections — as well as eviction as a "necessary last resort right of landlords."

Meantime, a group called the Just Cause Coalition has started a campaign to promote the charter change. The coalition, an arm of political advocacy group Rights & Democracy, hosted last week’s town hall and has been handing out lawn signs and phone banking for the cause.

The opposition has also been ramping up. The landlords’ association is making its own lawn signs and is sending out mailers to every Burlington residence. And the Vermont Association of Realtors formed a political action committee just to fight this ballot item.

Weinberger Raises $86K, Outpacing Tracy in Burlington Mayoral Race
By Courtney Lamdin
Off Message
Peter Tucker, the Realtor group's director of policy and public affairs, wouldn’t disclose how much the PAC has spent to date, though its activities will be reported in a campaign finance report due later this month. The PAC was formed February 2, just after the first filing deadline of the election cycle.

Zaikowski, the landlord association's director, said a just-cause ordinance would prevent landlords from evicting tenants who are generally “bad neighbors.” Instead of issuing that tenant a non-renewal notice, landlords would either be stuck with the person or would have to attempt evicting them for cause — and would have to prove to a judge that the eviction was warranted, Zaikowski said.

Charging Forward: Burlington’s Building Electrification Effort Hits the Ballot
By Kevin McCallum
City
“There are a lot of behavior things that we would all acknowledge are not acceptable, but they’re not gonna rise to the level of a breach of lease or some sort of violation of the ordinance,” she said. “But they’re not [behaviors] that people should have to live next to.”

Zaikowski also takes issue with a part of the proposal that would “limit unreasonable rent increases to prevent de facto evictions.” She says that language is rent control in disguise.

“When you’re talking about restricting the amount of rent that a landlord can raise on a tenant, that’s rent control,” Zaikowski said, adding that most landlords raise rents to cover increases in property taxes and insurance.

"It's expensive to be a landlord," she said.

Councilor Sarah Carpenter (D-Ward 4), who helped write the charter change proposal, emphasized that the intent is not to cap rents. Other states with just-cause ordinances consider market rates and inflation in determining “a range of reasonableness,” she said, adding that in Burlington, “there’s a whole body of work yet to be done around those definitions.”

Tucker said he’s dubious of that process, saying an annual increase in rent could be acceptable to one person but not to another. The measure would result in “unlimited litigation” from landlords and tenants arguing over rent hikes, Tucker said, adding that if landlords’ rental income is limited, they’ll be less likely or able to upgrade their properties.

“We are going to make a compelling case that just cause and rent control are bad public policy,” he said. 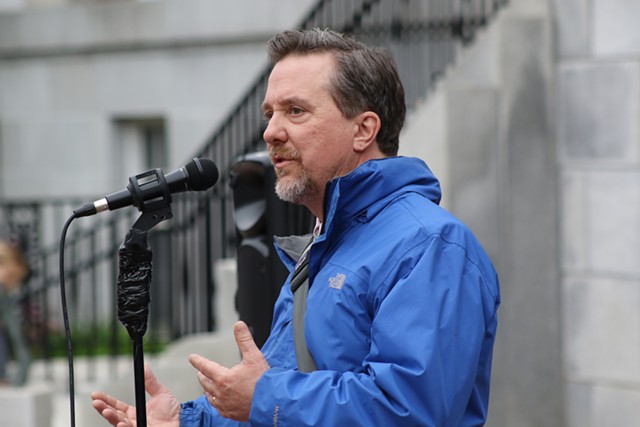 Pine, a small-time landlord who rents out a duplex next to his home, disagrees and says the just-cause proposal would encourage property owners to mediate conflicts instead of using evictions to solve problems. It would also force landlords to write better leases and thoroughly review rental applications, he said. To Pine, the chance to expand protections to all renters outweighs the possibility that a landlord gets stuck with a difficult tenant.

That potential scenario "is one you just have to live with and accept as part of the risk of having the privilege of owning property,” he said.

Pine was loath to predict the ballot item’s fate but said this year’s atypical town meeting could bode well for its passage. The city is mailing ballots to every active voter on its checklist, a decision that resulted in record-breaking turnout in the November general election. Turnout in renter-heavy wards is typically low, but that could change if a ballot is delivered to their doorsteps, he said.

There are also a number of other big-ticket ballot items, including proposals to reinstate ranked-choice voting, allow retail cannabis shops to open in the city and regulate heating systems — not to mention a colorful mayoral race.

Can Max Tracy Ride the City’s Progressive Wave to Become Burlington’s Next Mayor?
By Courtney Lamdin
Politics
“Those issues in and of themselves turn people from sitting on the couch and being apathetic, to being active in the process,” he said.

Tenant organizer Delphia, for one, is hoping the item passes on March 2. Living under the threat of eviction is stressful, she said, as is the real possibility of becoming homeless in Burlington's tight rental market.

In a rousing speech at the Just Cause Coalition's town hall last week, Delphia urged landlords to see the upsides of the proposal. Turning over apartments is time consuming and expensive, and keeping paying tenants ensures a steady stream of income, she said. She painted the ballot item as a win for both sides.

"When tenants are allowed to stay in their housing, they can get to know their neighbors and help build great communities," Delphia said. "And no matter what landlords try to tell you in rebuttal to this charter change, it is good for them as well."