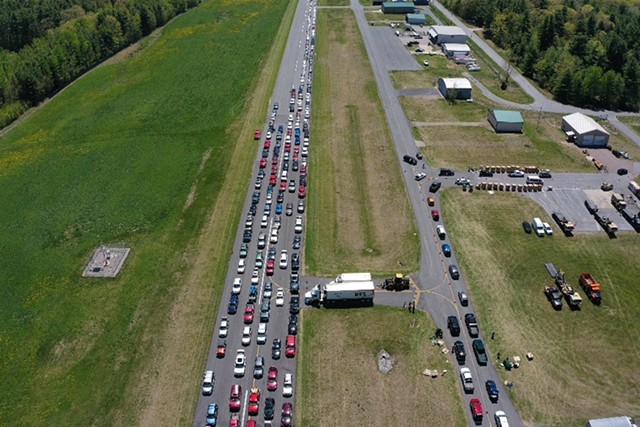 A federal contractor overseeing a pandemic food insecurity program has failed to live up to its obligations in Vermont, potentially leaving hundreds of families without access to emergency supplies, according to the state's congressional delegation.

In a joint letter on Friday, Rep. Peter Welch (D-Vt.), Sen. Patrick Leahy (D-Vt.) and Sen. Bernie Sanders (I-Vt.) slammed New Jersey-based Global Trading Enterprises over its performance during the most recent round of the Farmers to Families Food Box program and urged the Biden administration to select another vendor to complete the contract.

"The failures of Global Trading [Enterprises] have made the program nearly inoperable in Vermont, leaving hungry Vermonters without the food they need," the lawmakers wrote in a press release, describing the company's service as "disorganized, inadequate, and opaque."

The Farmers to Families Food Box program was designed to address a pandemic-related spike in food insecurity by connecting needy families with American-grown products. The program has distributed more than 130 million boxes since May 2020.

The Abbey Group, an Enosburg Falls company, landed Vermont's first two delivery contracts and successfully delivered more than 550,000 boxes last summer. But the U.S. Department of Agriculture has awarded the last three contracts to out-of-state companies "solely based on the lowest bid," the lawmakers said, and advocates have since reported distribution challenges.

The latest contract was announced January 19, the last full day of the Trump presidency. Global Trading Enterprises is now being paid $25.2 million to deliver the food boxes in Vermont, New York and Pennsylvania through April 30.

Though it's common for the federal government to award contracts to the lowest bidder, Vermont's federal lawmakers argue that Global Trading's bid was too low.

Their reasoning? The company is delivering boxes to only seven locations in just five of Vermont's 14 counties, they said. One local food shelf leader — who is not named in the letter — was even told that she would need to drive to the next county and wait in line for hours, the lawmakers wrote, "just for the possibility of receiving boxes when the delivery arrived."

"We are sure you will agree that this is a complete failure on the part of the vendor, which is required under their contract with the USDA to provide last mile delivery," the lawmakers wrote.

Leahy, Welch and Sanders are now asking the Biden administration to end the contract early and "thoroughly" investigate any violations to date. They said the contract should be put out to bid again to cover the last two months, and called on the USDA to consider past performance and prioritize vendors with successful track records when awarding the next bid.

Correction, February 22, 2021: Due to a source error, Global Trading Enterprises was misidentified in an earlier version of this story. The company is based in New Jersey.
Prev
Next