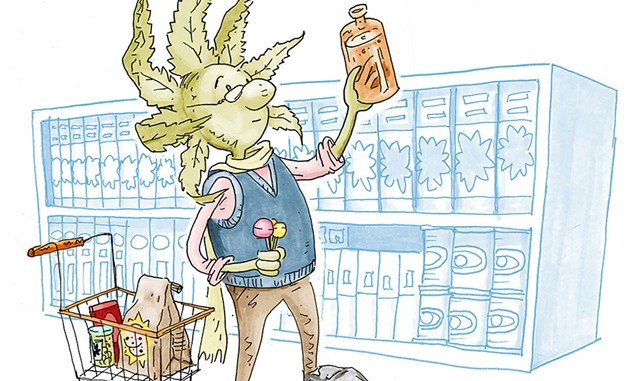 Burlington voters will get the chance in March to consider whether the Queen City should allow retail cannabis sales when Vermont's legal adult-use market opens in 2022.

The council voted unanimously to place a question on the Town Meeting Day ballot that would permit marijuana sales within city limits. Councilor Chip Mason (D-Ward 5) recused himself from the vote.

Vermont's cannabis law requires municipalities to proactively opt-in to the marketplace through a public vote. Under the law, the state's existing medical marijuana dispensaries can obtain what are known as integrated licenses to manufacture and sell cannabis products to the public in May 2022. Other retail licensees can't open until October 2022.

Burlington's ballot item, however, wouldn't allow any marijuana businesses to open until October 2022.

"This is a modest proposal to try to level the playing field," Councilor Sarah Carpenter (D-Ward 4) said. "We really wanted to try to be fair to all businesses and in particular, small businesses."

The council resolution also aims to promote racial justice by directing the city, "when possible," to use taxes generated by weed sales to help Black, Indigenous and other people of color participate in the industry. BIPOC communities have historically been more likely to be arrested for marijuana offenses than white people, despite similar usage rates.

If the ballot item passes, the city would also create a Local Cannabis Control Board that would provide technical assistance to Black business owners and help previously incarcerated people find employment in the cannabis sector.

Racial Justice Advocates Want Representation in Vermont's Pot Industry
By Colin Flanders and Sasha Goldstein
Politics
"We need to do everything we can to make sure that the folks who are getting those profits and who are employed in that industry are the same ones that have been harmed thus far," Councilor Jack Hanson (P-East District) said.

Councilors acknowledged that delaying Burlington's marketplace until fall 2022 may convince larger operators to set up shop in towns where they can open five months sooner. Councilor Joan Shannon (D-South District) suggested that Burlington would lose out on those tax revenues, which could be used to prop up BIPOC businesses.

"I don't understand how we're really benefiting the BIPOC community by having this delay," she said.

Hanson countered that opening the marketplace to everyone at the same time will help BIPOC entrepreneurs compete with more established cannabis companies.

Nearly 100 People Apply to Be on Vermont's Cannabis Control Board
By Sasha Goldstein
Off Message
"[They'll] have that same opportunity to thrive from day one," he said.

Councilors were poised Tuesday night to consider adding another item to the ballot, but the resolution's sponsor pulled it less than two hours before the meeting started, anticipating that it would fail.

Councilor Ali Dieng (I-Ward 7) had proposed asking voters to weigh in on whether the police department's roster should be increased from a maximum of 74 officers to 84. But Dieng, who is running for mayor, removed the item from the agenda after determining that a majority of the 12-member council wouldn't support it.

Dieng Wants Voters to Weigh In on Burlington Police Staffing Levels
By Courtney Lamdin
Off Message
The topic will now be discussed at the council's January 25 meeting.

"It is simply [postponed] since it was going to fail tonight for a lack of 7 votes," Dieng said in a text message to Seven Days, adding that both Progressive and Democratic councilors "[requested] better language we could work on before next Monday."

The city council voted last June to reduce the department from a maximum of 105 sworn officers to 74 in response to calls to "defund the police." There were 90 cops on the force at the time. Since then, the roster has shrunk to 83 officers, 79 of whom are considered "deployable" for duty. Police leadership has warned that the declining numbers will force the department to scale back its proactive patrols.

People sign up to speak using a form on the city website, which generates a list of names. For several months before Tuesday's meeting, Tracy had rearranged the list to put people who identify as BIPOC at the top in what he called a "progressive stack."

"The city attorney let me know ... we should not do the progressive stacking in a time limited-forum," Tracy said. "So I'm just gonna be going with [the callers] as they came in."

The decision comes two weeks after Cpl. Tyler Badeau, president of the Burlington Police Officers’ Association, publicly accused Tracy of silencing opposing viewpoints during meetings. Badeau had signed up to speak  at the January 4 meeting about a proposal to create a police oversight board, but Tracy didn't call on him during the two-hour public forum.

Tracy said he would have let Badeau speak if he'd recognized the officer's name. Badeau didn't note his affiliation with the police union and left blank the section of the form that asks which topic he wanted to discuss.

Badeau did not immediately return an interview request Tuesday night.
Prev
Next