Vermont Vaccine Appointments for Those 70 and Up to Open Tuesday 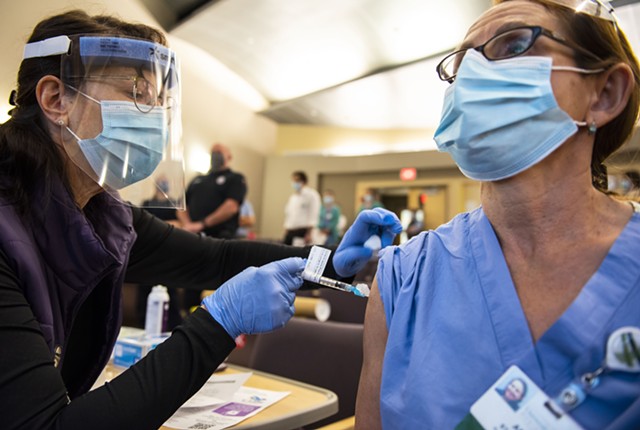 Vermonters 70 and older can register for a COVID-19 vaccination starting Tuesday, February 16, and some could begin receiving their first shots that same week, officials announced at a press conference Friday. The vaccine eligibility expansion moves the state into the third phase of its plan to inoculate residents.

The news comes a little over two weeks after Vermont began vaccinating the broader population, starting with people 75 and older. Roughly 35,000 people — 85 percent of that population— have either been scheduled for a shot or have already received their first dose, officials said.

"Opening the next age band is an important step, especially with hope on the horizon for increased supply and approval of new vaccines," Gov. Phil Scott said.

Starting at 8:15 a.m. on Tuesday, qualified Vermonters can register online or by phone — the former being the preferred method. A federal pharmacy program run through Walgreens will also be registering eligible Vermonters in 20 locations across the state.

There are an estimated 33,200 people between the ages of 70 and 74 in Vermont, according to Human Services Secretary Mike Smith, who anticipated moving through the age band "relatively quickly" before moving on to people 65 and older within the next few weeks.

UK Coronavirus Variant 'Very Likely' Detected in Burlington Wastewater
By Courtney Lamdin
Off Message
From there, the state will begin vaccinating people between the ages of 16 and 64 who have chronic health conditions, a group that Smith said could start receiving vaccines sometime before the end of March.

Who gets vaccinated from there remains an open question. "We're just contemplating all kinds of options," Scott said. "We may continue to do just the age banding, but we may do something else. We're just considering that as we speak."

The race to get shots in arms took on yet another layer of importance this week after officials announced that a more contagious variant of the coronavirus — one that originated in the United Kingdom — was "very likely" detected through wastewater testing in the city of Burlington.
While the state is now working to confirm the results through a complicated process that involves genetic sequencing, Health Commissioner Mark Levine said Friday that the findings were a "strong indicator" that the variant was present in the community.

"Learning this news doesn't really mean we have to change anything we do. We just need to do it all the better," Levine said, urging people to wear masks and social distance.

He noted that the Centers for Disease Control and Prevention now says that wearing a cloth mask over a surgical one will offer more protection against the virus. He also highlighted another CDC announcement that said people who have been fully vaccinated no longer need to quarantine when exposed to someone with COVID-19, as long as it has been no less than two weeks and no more than three months after their second dose.

Related As Vermont Offers Vaccine to Broader Population, Some Health Workers Get Left Behind

As Vermont Offers Vaccine to Broader Population, Some Health Workers Get Left Behind
By Colin Flanders
Health Care
"This is really great news and shows that we believe vaccination not only protects you from getting infected in those 90 days, but also that you won't be able to spread the virus, either," Levine said. He added that the window could likely be extended even further once experts have more data on how the vaccine is working. “The CDC is being appropriately cautious."

Vermont has been slower to offer the vaccine to the broader population than some other states. New Hampshire, for instance, opened registration for the 65 and older population in mid-January. But Scott noted that some states have since been forced to cancel appointments or schedule them out months into the future, "even for those in their seventies, eighties."

Defending Vermont's approach, Scott said the state was setting realistic expectations based on the supply it expects to receive from the federal government instead of "overpromising and underdelivering."

The state expects to receive 11,375 doses next week, slightly higher than some previous weeks but still lower than initial projections, while the Walgreens program will bring an additional 2,000 doses. The Biden administration has vowed to ramp up the federal supply in the coming months, and state officials say they will alter their vaccination rollout plan to keep pace should that occur.

"I think we're doing this right," Scott said.
Prev
Next