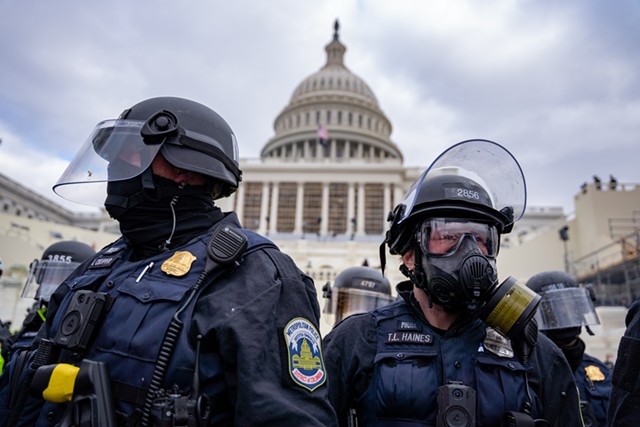 About 100 members of the Vermont Army National Guard will join 20,000 troops in Washington, D.C., in the days leading up to president-elect Joe Biden’s January 20 inauguration.

The timeline is fluid, but Vermont soldiers are expected to arrive in D.C. by Tuesday, a Guard spokesperson said Thursday morning. Most of those headed south are from the 1st Squadron, 172nd Cavalry, 86th Infantry Brigade Combat Team (Mountain).

The soldiers are among tens of thousands deploying to D.C. in the aftermath of the January 6 siege of the U.S. Capitol by pro-Trump extremists, who falsely believe outgoing President Donald Trump won reelection in November. A bipartisan coalition of members from the U.S. House of Representatives, including Rep. Peter Welch (D-Vt.), impeached Trump for the second time on Wednesday for his inflammatory speech ahead of last week’s insurrection.

Related In Trump They Trust: Vermonters Bring Fresh Conspiracy Theories Back From D.C.

In Trump They Trust: Vermonters Bring Fresh Conspiracy Theories Back From D.C.
By Colin Flanders
Politics
The National Guard members headed to the nation's capital will be “deployed to provide security, communications, medical evacuation, logistics, and safety support to district and federal agencies,” the Vermont Guard said in a press release. “The public’s safety is the top priority of the National Guard, members will meet the requirements of the supported civil authorities, posturing with protective equipment, weapons and live-ammunition.”

Gov. Phil Scott, a frequent critic of Trump who has called for the president’s removal from office for inciting the insurrection, approved the mission, which takes some soldiers out of state at a time when they are also supporting COVID-19 relief efforts in Vermont.

Essential Soldiers: Virus Response Showcases the Versatility of the Vermont National Guard
By Kevin McCallum
News
“After the tragic events at our Capitol on January 6, we must do all we can to secure a peaceful transition of power on Inauguration Day,” Scott said in a statement. “I am grateful to the brave men and women of the Vermont National Guard for their service and doing their part during this deployment to protect our republic and the democratic values we hold dear.”

Thousands of National Guard members are already in Washington. Photos on Wednesday showed soldiers sprawled out in the Capitol rotunda, guarding the beacon of American democracy for the first time since soldiers defended the building during the Civil War.

“We swear an oath to support and defend the Constitution of the United States of America,” Maj. Gen. Greg Knight, adjutant general of the Vermont National Guard, said in a statement. “We are honored to play our part in securing one of the most time honored traditions in American history: the Presidential Inauguration.”
Prev
Next