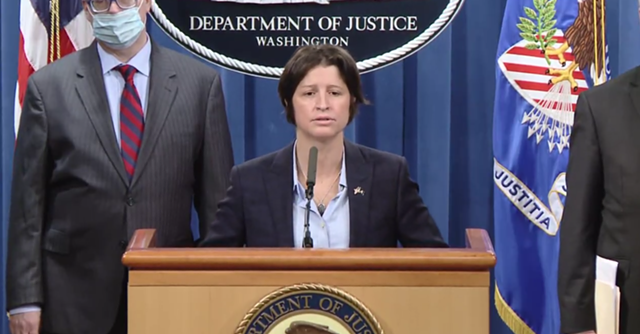 Purdue will pay a criminal penalty of more than $5.5 billion in what the U.S. Department of Justice said Wednesday is the largest such penalty ever levied against a pharmaceutical manufacturer in a criminal case. Purdue will also pay an additional $2.8 billion civil fine, making for an $8.3 billion total settlement.

"The resolution in today’s announcement re-affirms that the Department of Justice will not relent in its multi-pronged efforts to combat the opioids crisis," Deputy Attorney General Jeff Rosen said during a press conference announcing the deal.

Nolan's office began investigating Purdue in 2018. This past January, she announced a $145 million settlement with electronic medical records company Practice Fusion, which had conspired with Purdue to push pills to patients using an alert system embedded in medical software.

The alerts prompted doctors to ask patients about their pain levels and presented a list of extended-release opioids, including OxyContin, as treatment options for patients with only moderate pain — contrary to federal medical guidelines. Nolan's office uncovered the system, which was used by doctors in all 50 states, but only "after the alerts fired more than 230 million times," Nolan said at the press conference, held in Washington, D.C.

Criminal Conspiracy Alleged By Vermont Prosecutors Involved Purdue Pharma
By Derek Brouwer
Off Message
The prosecutor said the illegal scheme "put profits over people ... when, in Vermont, where I'm from, and across the country, people were suffering under opioid addictions that sometimes ended in death.

"So many of those addiction stories began with OxyContin," Nolan continued.


In a statement Wednesday evening, members of the Sackler family said the settlement "directs substantial funding to communities in need."

"This proposed resolution includes relinquishing our ownership of Purdue and has been valued at $10-$12 billion — more than double all Purdue profits the Sackler family retained since the introduction of OxyContin," the statement reads. "We have deep compassion for people who suffer from opioid addiction and abuse and hope the proposal will be implemented as swiftly as possible to help address their critical needs."

The federal settlement does not resolve thousands of pending suits filed by state governments or local municipalities against Purdue and its owners, the Sackler family. Vermont Attorney General T.J. Donovan's office sued Purdue in September 2018, alleging the company should be forced to pay for its role in Vermont's opioid crisis. In May 2019, Donovan announced the state was suing eight members of the Sackler family for falsely claiming their products weren't addictive.

It's unclear how much of the federal settlement Purdue will actually pay. The company filed for Chapter 11 bankruptcy protection in September 2019 to shield itself from the mounting opioid litigation and has a long line of creditors to make whole, including the federal government. The bankruptcy court still must review the deal.

If approved, the settlement would dissolve Purdue and place the company in a new public trust that would continue to sell medications "in a manner as safe as possible," Rosen said.

Last week, Donovan joined 25 state's attorneys general in asking U.S. Attorney General William Barr to revise that provision of the agreement, arguing that "a business that killed thousands of Americans should not be associated with government." The four-page letter said that selling Purdue to a private buyer would provide more funds that cities and states "can use to abate the opioid epidemic."

In a statement Wednesday, Donovan panned the deal, saying it "does not sufficiently hold the Sacklers and Purdue Pharma accountable for the opioid crisis that they created," nor does it provide enough money "to adequately address the public health needs" they created.


"I object to billionaires going to bankruptcy court to escape liability," he wrote. "In addition, I object to the government entering into the business of selling OxyContin."

He vowed that his office would "press as hard as we can to get the most dollars we can for Vermont. We are not taking our foot off the gas."

Responding to questions from reporters Wednesday, Rosen said the new "public benefit company" would invest Purdue's resources in opioid abatement programs and toward development of new medical treatments, including opioid reversal drugs. He called the settlement "a very desirable outcome."
Prev
Next