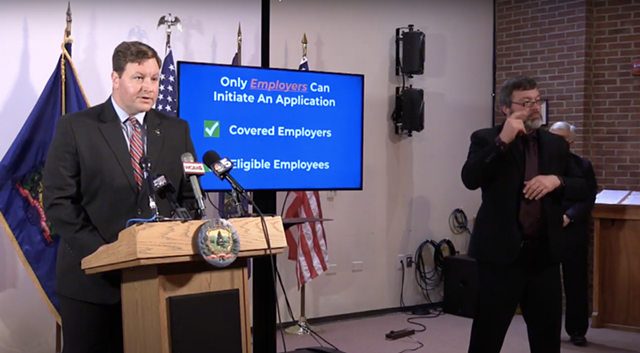 Employers will be able to apply for hazard pay on behalf of their employees starting next Wednesday in the second round of a program aimed at compensating frontline workers.

This time around, the Frontline Employees Hazard Pay Grant Program will cover employees from 26 different business categories, including grocery stores, pharmacies and childcare providers. The previous round of hazard pay grants, announced in August, was open to employees in just 14 categories, primarily health care and eldercare workers.

Once an employer is approved, employees can receive either $1,200 or $2,000 to cover work between March 13 and May 15. Employees who made under $25 an hour between March and May are eligible for the hazard pay grants, with exceptions for some health care workers who may receive the grants regardless. And employees who worked during that time, but who are no longer employed at the same business, are also eligible.

Applications will open next Wednesday, October 28 at 9 a.m., for the first-come, first-served program, funded by a $22.5 million appropriation from Vermont's allotment of the federal CARES Act.

At a press conference Friday, Financial Regulation Commissioner Mike Pieciak urged employers to get applications in as early as possible, noting that there was high demand for the earlier program, which allocated $28 million to a narrower range of businesses and employers.

“We anticipate that the money will be committed very quickly,” he said.

The interim plan describes Vermont’s strategy for distributing COVID-19 vaccines to residents as the treatments become available and are shipped to the state. That likely won’t be for another few months, at least, depending on when a vaccine is approved for use.

Having a plan to distribute the vaccine is important, he said, because he does not expect Vermont to receive enough doses initially to vaccinate everyone in the state.

“Health care workers who provide direct patient care, first responders, plus residents and staff of long-term care facilities are likely to be among the first to be vaccinated,” said Levine.

The state will use vaccination clinics to reach some of those groups. And through a newly announced federal partnership, long-term care facilities will be able to enroll with CVS or Walgreens to receive vaccinations for residents and staffers directly through the pharmacies.

As more vaccines arrive in the state, likely in 2021, providers who typically provide vaccinations would be able to start offering them to their patients. Levine said the state is also working on options for people experiencing homelessness, guest workers and others who may have limited access to medical care.

“I will be the first to encourage everyone who can be vaccinated to step up for the vaccine when it’s available to them,” Levine said.

And he emphasized that by the time the vaccines are approved, they will have been thoroughly vetted for safety and effectiveness.