The last traces of the monthlong encampment at Burlington's Battery Park were mostly cleaned up Monday afternoon when a group of people bagged up trash, tents and other items from the site.

Starting in August, racial justice activists had occupied the park for 35 days to demand the firing of three Burlington cops accused of using excessive force. One of those officers, Sgt. Jason Bellavance, was offered a $300,000 buyout on September 22. The protesters ended their 24-7 park encampment on September 30, but about a dozen tents, garbage and other items remained five days later.

Some tents appeared to belong to homeless folks who were drawn to the encampment during the protests. One young woman, who said she had participated in the protests but otherwise declined to comment, wore a mask and vinyl gloves as she cleaned up Monday.

After announcing the end of their park encampment last week, protest organizers issued a statement calling attention to the issues homeless people face in Burlington.

Related After 30-Plus Days, Protesters Pack Up Battery Park Encampment

After 30-Plus Days, Protesters Pack Up Battery Park Encampment
By Sasha Goldstein
Off Message
"Our City and State must work to end involuntary houselessness by offering universal housing through a wide range of low-barrier, inclusive accommodations and options," the statement read, noting that existing shelters create barriers by "requiring government IDs, sobriety, and gender exclusion; just to name a few."

The statement called on city officials to better fund social services for the homeless and for Burlington cops to stop responding to calls for people in mental health crisis. 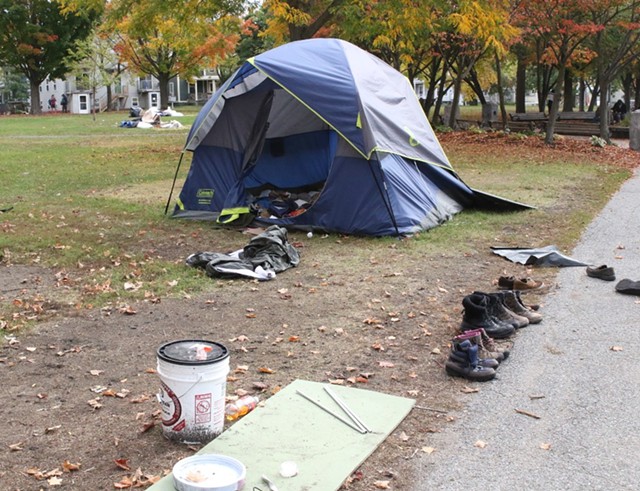 One of those calls played out in real time as volunteers cleaned the camp Monday. An apparently drunken man started yelling, threw a chair and threatened fellow campers, leading one leaf peeper in the park to call the police. Three officers responded and attempted to calm the man down; the interaction ended peacefully.

Watching nearby were two homeless men, one of whom was packing up blankets and clothing from inside a green tent. Both men declined to share their full names; the younger man, Jay, said he'd camped at the park "off and on" before the protest had even started.

The police hadn't told them to leave, but they felt pressured to move on. They said they prefer to camp because shelters have too many rules. 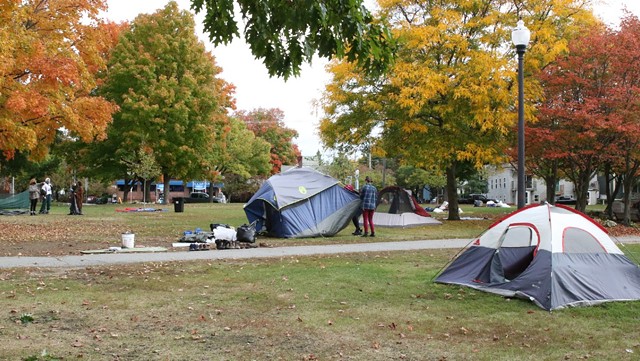 "Mainly I don't want to deal with those fuckers over there," Jay said, referring to the officers talking to the agitated man.

His tenting companion, a grizzled and tattooed man named Preacher, agreed. “Like everybody else, we don’t know where we’re going right now," he said. "You’re living on the edge every minute. Then you’ve got crazy shit like this.”


Mayor Miro Weinberger did not respond Monday to a request for comment on the situation at the park. But last Thursday, as the occupation ended, the mayor said the city was "working with the remaining campers in the park to understand their needs and any services that we can help with."

Preacher and Jay made clear Monday that they were perfectly happy being left alone. That's not to say they wouldn't accept any help.

At one point, a man carrying a backpack approached and handed the men paper bags full of fruit snacks, granola bars and water bottles. They graciously accepted.

"Me and him," Preacher said of Jay, "we're working on physically staying alive."
Prev
Next