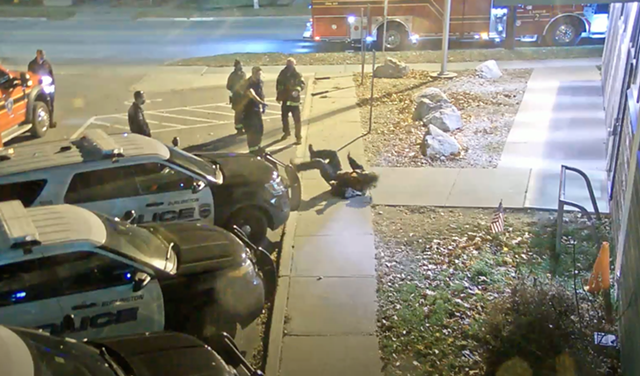 A Burlington firefighter who shoved a man to the ground outside the city police headquarters last month was cited for assault and has quit, city officials announced Friday.

Video of the incident captured by police department security cameras shows the unidentified victim’s head bounce off the sidewalk. The man lays there nearly motionless as four fire department employees surround him. A police officer is visible exiting the building as the 35-second clip released by the city ends.

A timestamp on the video shows the incident happened around 10:45 p.m. on November 21. Kevan Mahoney was cited for simple assault around 10:35 a.m. the following day.

Mahoney “was immediately placed on administrative leave while an internal investigation into the incident was conducted,” the fire department said in a press release announcing the news on Friday afternoon. He quit once the investigation was complete.

The release does not detail what the investigation found about Mahoney’s conduct, but the statement says the probe “also included a review of the actions of all Fire Department personnel on scene and found no other policy violations occurred.”

“The Department takes these accusations very seriously and understands the trust the public places with us,” Fire Chief Steven Locke said in the statement. “The video of this incident is very concerning and the actions taken by Firefighter Mahoney are not in line with the Department’s mission, vision or values.”
In a follow-up email, Locke cited "personnel issues" in refusing to disclose the results of the internal investigation or reveal if there’d been any previous issues with Mahoney’s on-duty conduct.

The victim was taken to the University of Vermont Medical Center and later released, according to Locke.


“This behavior is unacceptable in a Fire Department that regularly demonstrates its commitment to serving and protecting our public, and Mr. Mahoney is being held to account,” Mayor Miro Weinberger said in a statement included in the fire department's press release.

In an email, acting Burlington Police Chief Jon Murad said that he could not release the incident report until Mahoney’s arraignment, which is scheduled for January 21.

Murad did release some details of the night in question. He described the victim as “a houseless individual known to the department.” Murad said the man came to the police headquarters on North Avenue that night asking to be taken to ACT 1, a Howard Center program for people “who feel they are incapacitated due to alcohol or other drugs,” according to the treatment center’s website.

“BPD officers spoke with the individual and advised him that they could not accommodate his request because ACT 1 was at capacity,” Murad said in the email. “The individual was not incapacitated.”

Twenty minutes later, the man used the police department's lobby phone to complain of chest pains, and he asked the fire department to respond, according to Murad.

The video shows some of what happened next, though there is no audio. The man approaches Mahoney, who extends his arm toward the man. The man continues to approach until Mahoney gives him a slight push backward.

The man then takes off a winter hat and throws it to the ground and slowly approaches Mahoney, who again extends his hand and begins pointing at the man. Mahoney then takes a step forward and shoves the man with both hands. The man falls backward and smacks his head on the sidewalk.

The four nearby fire department employees then surround the man.

Violence Caught on Camera Leads to Brutality Claims Against Burlington Cops
By Derek Brouwer
Off Message
The incident bears some similarities to two involving Burlington police officers from September 2018. Those incidents, though, only came to light publicly after the men involved sued the officers and the city in the spring of 2019.

Burlington Council Approves Buyout for Cop Accused of Excessive Force
By Courtney Lamdin
Off Message
In one incident, Bellavance shoved a man outside of a downtown bar. The man, Jérémie Meli, struck his head on a brick wall and was knocked unconscious.

Bellavance was suspended for approximately three weeks and returned to the force. But he left this fall after the city, under pressure from the protesters, offered him a $300,000 buyout.

Campbell and Corrow remain on the force. None of the three were charged with a crime.
Prev
Next