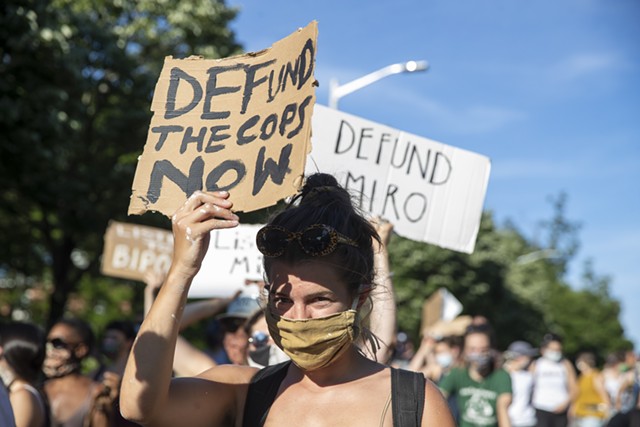 A long-awaited assessment of police operations in Burlington found that the department needs between 76 and 83 sworn officers — suggesting that the city council’s controversial decision to cut the force to 74 cops last summer wasn't far off target.

The report also found serious deficiencies at the Burlington Police Department, including inefficient staffing schemes, inadequate training, a lack of oversight and evidence of racial bias. It found that the department’s contract with the Burlington Police Officers’ Association is hamstringing operations and certain aspects should be renegotiated. The current contract expires in June 2022.

The consultants found some bright spots in their review of the department, including its plans to hire unarmed civilians to respond to certain calls, the hiring of a social worker and the department's reduction in traffic stops.

The 168-page report, authored by Virginia-based nonprofit CNA, is expected to guide the city’s decisions about policing into the future; the consultants gave recommendations to improve the deficiencies noted in the report. It comes after more than a year of debate over appropriate police staffing levels that was spurred by protests over police uses of force, particularly against people of color.

City officials received the draft report this week, and Seven Days obtained a copy of the document, which has yet to be finalized and released to the public.

“Policing has reached a pivotal point in history,” the report says, noting that many departments nationwide face problems similar to Burlington’s. “In its response to this assessment, BPD has the opportunity to provide leadership in the policing profession regarding how to constructively respond to the current challenges it faces.”

The sections on staffing and scheduling provided the most comprehensive analysis, taking up 40 pages, or close to a quarter, of the report. One section includes a detailed breakdown of how to staff a department of either 76 or 83 officers, which CNA says is an appropriate staffing range for Burlington.

The report includes suggestions for how many cops should be assigned to leadership roles and to the patrol division, and how many officers should work each shift.

The report says the department’s current schedule of four 10-hour shifts, which overlap one day a week and are dictated by the union contract, is “very inefficient” and “inflexible” and doesn’t effectively cover the city’s highest call volume times. The team instead recommends six 12-hour shifts which would align “officer work schedules with the times and days when they are most likely needed.”

In a June article, Seven Days raised the question of whether the department was properly and most efficiently deploying its officers. An analysis found that acting Chief Jon Murad chose not to consistently staff the city’s downtown on weekend overnights this summer, even though that area had the highest call volume.

Midnight Blues? Late at Night, Burlington’s Downtown Policing Is Sporadic
By Courtney Lamdin
Crime
The CNA report suggested that officers scale back routine traffic stops and consider only responding to car crashes that cause injury or property damage. The department should bolster training in crisis intervention and responding to mental health calls. And lower-level calls should be given to unarmed civilian professionals or other city departments, freeing up police for training, community engagement and crime prevention, the report says.

Regarding the airport, the report says that one sergeant and seven officers were assigned there to provide 24/7 coverage in 2019. The union contract stipulates that “all police work” at the airport is Burlington’s responsibility. CNA called that “an overreach by the department and an attempt to obtain work that should be the responsibility of other entities” such as the Federal Aviation Administration or Transportation Security Administration.

The consultants recommend that only four Burlington officers — the contractual minimum — be assigned there.

Altogether, such changes will allow the department “to provide more balanced operations,” the report says. 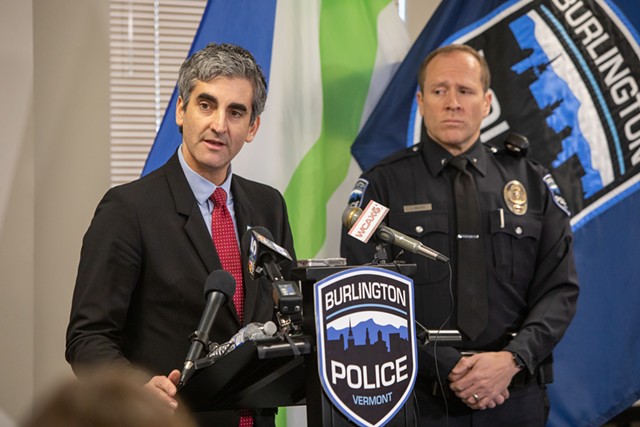 The findings are likely to validate council Progressives, who Murad and Mayor Miro Weinberger have repeatedly blamed for creating a public safety crisis after voting last summer to reduce the police force by 30 percent through attrition. Just last week, the American Civil Liberties Union of Vermont penned an open letter accusing Weinberger and Murad of misleading the public into thinking that having fewer cops has made the city less safe.

But while CNA’s report says the council “correctly identified” that the department was overstaffed, it also concluded that “the pace of the reduction, without alternative resources,” impacted officer morale and “negatively affected” their workloads. Officers have left for other departments and retired faster than expected. As of August, the department had 75 sworn officers, down from 90 in June 2020.

Burlington City Council Votes to Cut Police Force Through Attrition
By Courtney Lamdin
Off Message
The consultants suggest that the city, with input from the community, should “re-envision the mission of BPD” and provide officers with clear expectations. Meantime, continued attrition, without a plan for future recruitment, “is a concern,” the report says.

City Councilor Zoraya Hightower (P-Ward 1), who serves on the council subcommittee that hired CNA, acknowledged that the document supports the council's staffing vote but said "there is so much more to the report than that," such as the section on oversight.

"I think that this is the best value for money that the city has gotten on police transformation," she said. "It feels really thoughtful and substantive and actionable."

Burlington Police Chief Proposes Civilian Reinforcements for Shrinking Force
By Courtney Lamdin
Off Message
Other sections of the report found that department policies, training regimens and oversight structures were outdated or insufficient — this, despite the fact that the department has long boasted of its commitment to “21st century policing” principles.

For one, CNA found that the department collects “relatively little” information about complaints against officers. The information it does collect is recorded in an Excel spreadsheet, “a rudimentary form of holding important data,” the report says; CNA recommends an entirely new tracking system.

Twelve randomly selected internal investigation reports were missing vital information, including any reference to the probe’s timeline, evidence reviewed, length of officer suspensions and more. The police union contract restricts releasing information about officer complaints, findings and discipline — which is an anomaly, according to the consultants. 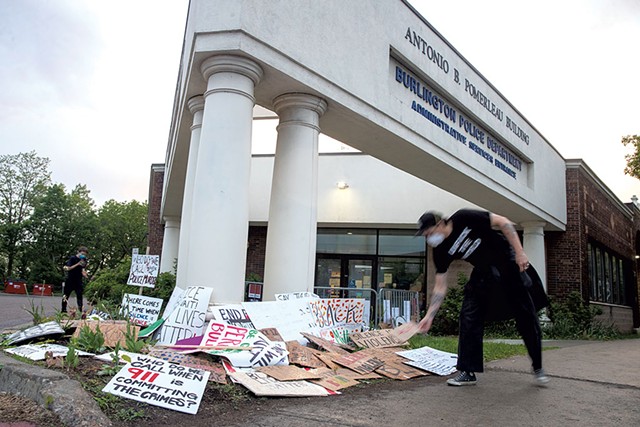 The department should also continue internal investigations even if an officer resigns mid-way through, instead of the current practice of closing the case. This allows “an officer to apply to another department because cases are not forwarded to the state,” the report says. If the officer resigns without participating in such an investigation, Burlington could forward that information to the officer’s new department, the report says.

CNA also says that the police chief should not be the final arbiter on officer discipline. Rather, a “citizen review board” should be empowered to review internal investigations.

Burlington Councilors Fail to Override Mayor's Veto of Police Oversight Proposal
By Courtney Lamdin
Off Message
The recommendation is similar to the “community control board” model proposed by council Progressives late last year. The plan would have given the panel the ability to investigate and punish officers for misconduct. But Weinberger vetoed it last December, saying he preferred that the city’s current citizen-led police commission be given more oversight power.

A council effort to override the veto failed in January, and the charter change was not included on Burlington’s Town Meeting Day ballot in March.

Tyeastia Green, the city’s director of Racial Equity, Inclusion and Belonging, and who oversaw the contract with CNA, declined on Wednesday to comment on the report until discussing it with the administration.

She said her department “will publicly release the report as soon as we possibly can.” Green added that she hopes the report can be included on an upcoming city council agenda.

City Council President Max Tracy (P-Ward 2) said Wednesday afternoon that while he had heard “rumblings” about what the report contains, he didn’t want to comment until he had read the report himself.

Weinberger was not immediately available for comment Wednesday evening,
but on Thursday morning, his office released a joint statement with members of the committee that hired CNA. The statement emphasizes that the report obtained by Seven Days is a draft and that "there may be important clarifications to the final document." It also says the proposed number of officers "does not equate to an 'authorized cap.'"

"Where the City’s police staffing should fall in this range is dependent on a number of other factors and policy changes – in addition to required officers, the consultants provide 150 other recommendations," said the statement, which was signed by Weinberger, Hightower and police commissioner Shireen Hart.

"It is unfortunate that the report was leaked before it was finalized," the statement continues. "We do not wish premature analysis to erode the public’s confidence in the final report, as we all trust the process that produced it."


Neither Murad nor Jabulani Gamache, chair of the police commission, returned interview requests.

The report's conclusion notes that the researchers were "encouraged" by the police department's willingness to improve, but that both the police and the "broader city ecosystem" have a shared responsibility to heal the conflict and political divide.

"Maintaining this priority will be essential in developing a better department," the report says.

Councilor Hightower was pleased by the outcome.


"We hired a really good firm who knew what they were doing, and this was the end result," Hightower said. "I'm excited for the public to read it."
Prev
Next