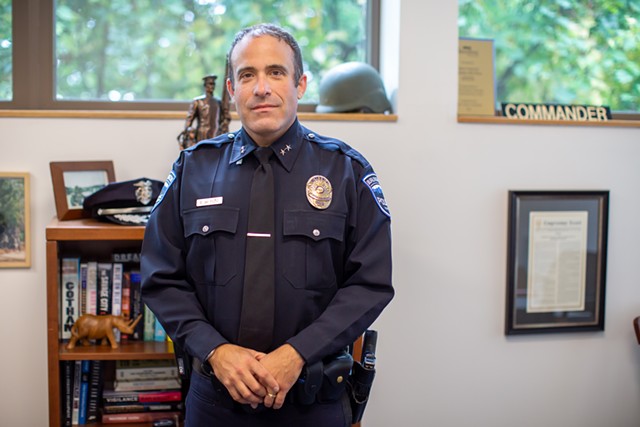 After complaints from employees, the Howard Center board of trustees has hired an investigator to help determine whether former Burlington police chief Brandon del Pozo should continue serving as a trustee.

The Howard Center provides mental health and substance use services and is one of the biggest employers in the state. Del Pozo has served on the organization's board since 2018. His three-year term ends in 2021.

Burlington Police Chief Admits He Used an Anonymous Twitter Account to Taunt a Critic
By Courtney Lamdin
Off Message
"We believe Brandon brings unique and valuable insight and have supported him in his decision to stay on the board," Stenner wrote. "However, we recognize that there are strong feelings of harm on both sides and gaining a full, unbiased understanding of all that has happened, or continues to happen, is in the best interest of Howard Center and we believe is an imperative in order to move forward."

Del Pozo has agreed to recuse himself from board proceedings while the inquiry is underway, according to Stenner's letter. Reached Friday, Stenner would not disclose who is performing the investigation or provide any details about its scope.

"We're looking at this collectively, not just Brandon's actions," she said. "People seem stuck on one set of actions, and I think we need to look at the whole set."

Stenner would not clarify whether the probe would also focus on Winkleman's online conduct. "The letter speaks for itself," she said. "I don't want to do anything to prejudice or hinder the investigation."

The decision comes more than a month after members of AFSCME Local 1674, the union that represents Howard Center employees, started a petition to "drop del Pozo" from the board. It amassed more than 600 signatures, many from clients and employees. Del Pozo detractors and supporters have called into several recent Howard Center staff and board meetings to speak on the issue.

"Given the conflicting sentiments about Brandon, we recognize that any decision reached regarding Brandon’s participation on the Howard Center Board of Trustees will not have unanimous acceptance," Stenner wrote.

In July 2019, del Pozo created the @WinkleWatchers account and posted a series of tweets about Winkleman, a known police critic and avid Twitter user. Del Pozo initially lied when Seven Days asked him about the account last summer.

The then-chief ultimately admitted his conduct in a conversation with Mayor Miro Weinberger, and the city proceeded to quietly investigate del Pozo's social media behavior, removing his badge and gun and placing him on paid administrative leave.

That leave soon changed to a six-week medical leave of absence when the city learned that del Pozo's actions were caused by an "underlying mental health condition," Weinberger has said.

Del Pozo publicly admitted to his behavior in December 2019, after Winkleman wrote a blog post that publicly accused del Pozo of harassing him online. The chief resigned days later.

On Tape: Burlington Police Chief Lied Repeatedly About Twitter Account in July Call
By Courtney Lamdin
Off Message
His replacement, former deputy chief Jan Wright, stepped down earlier this year after admitting she operated her own burner accounts to interact with members of the public. The city has since adopted a city-wide social media policy, though Winkleman and others have advocated for a set of guidelines specific to police. The city's citizen-led police commission discussed the topic last week but took no action.

The city has not completed a review of social media use among all Burlington Police Department employees, as Weinberger pledged to do in the scandal's wake. The city hired "workplace expert" Anita Tinney to perform that review, but the coronavirus pandemic hit before she could start, according to Jordan Redell, Weinberger's chief of staff. The city's human resources director left in May and has not been replaced, she said.

New Details Lead Some to Question Probe of Burlington Deputy Police Chief
By Courtney Lamdin
Crime
After laying low for a few months, del Pozo has reemerged as a police reform expert in local and national media outlets following the death of George Floyd in Minneapolis. Del Pozo has also used his newfound platform to insult Winkleman, calling him "toxic" and "onerous" in various interviews.

Winkleman says the trauma from the del Pozo incident led him to take a mental health leave from the Howard Center in June. He said it's troubling that the board is protecting del Pozo instead of its own employee.

"It's strange to see a community mental health organization entirely dismiss my own mental health needs," Winkleman said. "I think it's pretty clear where their loyalties lie."

Burlington's Former Top Cop Reemerges as Police Reform Expert
By Courtney Lamdin
Crime
Del Pozo's board position is equally troubling to Winkleman's fellow union members, who say that someone who belittles a Howard Center worker has no place on its board of trustees.

"As employees we are concerned that the board is losing trust in the community by ignoring calls for change and putting the rehabilitation of one individual over the agency's own goals," union members wrote in an open letter to Howard Center leadership on Monday. "We are worried that our jobs will be made more difficult as the board takes actions that deeply conflict with its stated values."

Other community members have stood by del Pozo. Kimberly Blake, who Zoomed in to an August 11 board meeting, said she served on several panels with del Pozo after her son died of an opiate overdose in 2017. Blake said del Pozo should be given a second chance.

"[My son] died from a preventable disease, and people like Brandon have done tremendous amounts in our community to help people with opiate use disorder," she said. "I do believe that he has a place in our community."

“He made an unfortunate personal mistake,” Stenner said last month of del Pozo. “In the society that I want to live in, people make mistakes and people are forgiven and they're given another opportunity.”

On Friday, Stenner said that she would not comment on the investigation because Seven Days' most recent story about del Pozo was "very anti-Brandon." She accused the paper of having a "hidden agenda" since del Pozo lied to this reporter about the @WinkleWatchers account last year.

Del Pozo also declined to comment. Bick did not respond to an interview request.
Prev
Next