The account, @WinkleWatchers, has since been deleted. Del Pozo created the profile to mock Charles Winkleman, a Burlington resident, political activist and known provocateur who regularly takes aim online at the chief, landlords and others in power.

Del Pozo lied when Seven Days asked him about the burner account in July, saying he had nothing to do with it. But days later, del Pozo confessed what he had done to Mayor Miro Weinberger. He took six weeks of medical leave to seek mental health treatment, the mayor said. The chief has been back on duty since mid-September.

"I was disappointed in what I did,” del Pozo told a reporter Thursday, speaking softly in a somber tone. “It was a mistake, and I regret it, and I'm sorry.” 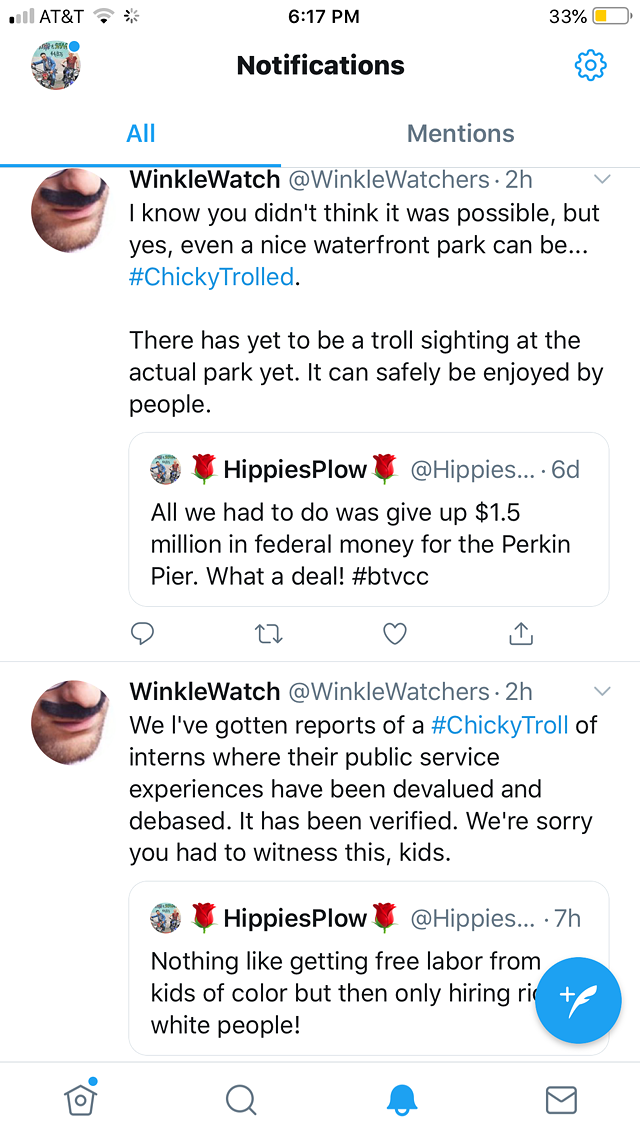 “I’m amazed that they would even admit it," he said. "But for me it comes down to: What’s going to change? What’s the accountability like?”

Del Pozo created the account on July 4 while he was off duty, he said. Using his personal cellphone, he sent out a litany of tweets mocking Winkleman's views. The avatar for the account was a cropped photo of Winkleman wearing a Groucho Marx-style mustache, previously published in connection with his performance at the 2013 Green Mountain Comedy Festival.

“The #ChickyTroll is a cowardly creature hiding behind an electron curtain,” WinkleWatchers wrote in one tweet. "Chicky" is a nickname of Winkleman's. “We’ve been blocked, but he will surely continue to insult, debase, have faux indignation, harass, and in sum: TROLL.”

Winkleman contacted Seven Days soon after with his suspicion that del Pozo was behind the profile. This reporter asked del Pozo about the allegation on July 23. He denied having any “sock puppet accounts.”

“The answer's categorically no," the chief said. "If I had anything to say, I would say it directly.”

On July 28, del Pozo went to Weinberger’s home to admit to his boss that he’d created and run the account, both men said. Weinberger placed the chief on paid administrative leave, stripped del Pozo of his gun, badge and cellphone, and ordered him to stay off social media.

A subsequent internal investigation by city attorney Eileen Blackwood and Human Resources director Deanna Paluba “very quickly … turned up a number of things,” Weinberger said, including a finding that del Pozo’s actions were “linked to an underlying medical condition.”

“From that point on,” Weinberger said, “this was treated as a verified medical situation.”

The mayor's chief of staff, Jordan Redell, announced on August 2 that del Pozo had taken a "Family and Medical Leave of Absence." Del Pozo returned to duty on September 15 after his personal doctor and the city’s independent medical examiner both cleared him, Weinberger said.

On Monday, Winkleman published a lengthy account of  why he believed the chief was behind WinkleWatchers on his site, charleswinkleman.com, under the headline "Chief Brandon del Pozo Bullies Critics into Silence."

Seven Days reached out to del Pozo Tuesday about Winkleman's public allegation. A deputy chief called the paper on Wednesday to say the chief would be available to talk in person at the One North Avenue police headquarters at 5 p.m. Thursday.

During the interview, del Pozo refused to name his specific diagnosis, but he said he suffered a brain injury in his June 2018 near-fatal bike accident in the Adirondacks. He also alluded to stressful “challenges” this spring and summer, when his department was under intense scrutiny for use of force.

“It resulted in a lapse of judgment where I made a mistake that I regret,” del Pozo said. “I responded to negativity with negativity in a way that doesn't become a chief of police.”

On Tape: Burlington Police Chief Lied Repeatedly About Twitter Account in July Call
By Courtney Lamdin
Off Message
His social media presence has led to criticism in the past. In July 2017, the chief used his personal Facebook account to take to task an 18-year-old woman who accused officers of wrongdoing on social media.

Weinberger acknowledged the chief's problematic past social media use. Yet when del Pozo returned from leave, the mayor's only sanction was to verbally reprimand the chief. He warned him any repeat offense would result in his immediate dismissal. The mayor chose not to pursue harsher discipline because del Pozo regretted his actions and his service has “otherwise been exemplary,” Weinberger said.

“Mental health challenges are serious issues among public safety personnel,” Weinberger added. “We have a duty to be compassionate about them.”

Winkleman was critical of the administration for not going public sooner and said the chief has never shown he can accept criticism.

He said: "If you regretted it, why didn't you apologize to me?"
Prev
Next