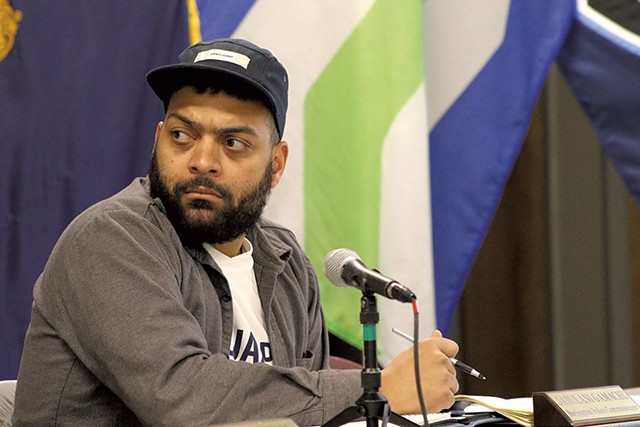 Members of the Burlington Police Commission chose Jabulani Gamache on Tuesday as the citizen board's next chair.

He will take over for Michele Asch, whose three-year term expires on June 30. Asch announced during  the commission's monthly meeting that she did not plan to seek reappointment to her post, citing other professional endeavors.

Gamache told fellow commissioners that they would need to have "hard and uncomfortable conversations" in the weeks ahead.

"Frankly, enough is kind of enough," he said, an apparent allusion to the death of George Floyd last week in Minneapolis police custody, which has set off protests nationwide. "People are looking to us for leadership and accountability. We need to deliver."

Burlington Protest Leads to Confrontation With Police Brass
By Matthew Roy
Off Message
The young bartender was one of three black men appointed to the commission last July in the weeks following allegations of Burlington police brutality against people of color. Their contentious appointments gave the seven-member panel a majority-minority makeup.

It also prompted critique from then-deputy police chief Jan Wright, who used a pseudonym to comment on a Seven Days story: "The commission is now 6/7th black. Is this representative of the Burlington community?"

Wright resigned earlier this year following an investigation into her social media use.

He later served on a special council committee that recommended a slate of changes to policing policy and practices.

The police commission is primarily advisory and does not have the independent oversight granted to commissions in some other cities. Members have asserted a greater role in reviewing citizen complaints, especially those involving use of force. The body may recommend discipline, but the police chief has final say.

The Bellavance case, for instance, resulted in a three-week suspension, but the incident was not publicized until Meli filed a civil rights lawsuit in federal court many months later.

Gamache has said Bellavance's suspension should have been harsher.

At a later date, the Burlington City Council will appoint someone to Asch's seat and someone else to the seat currently occupied by Nyree Miles.
Prev
Next