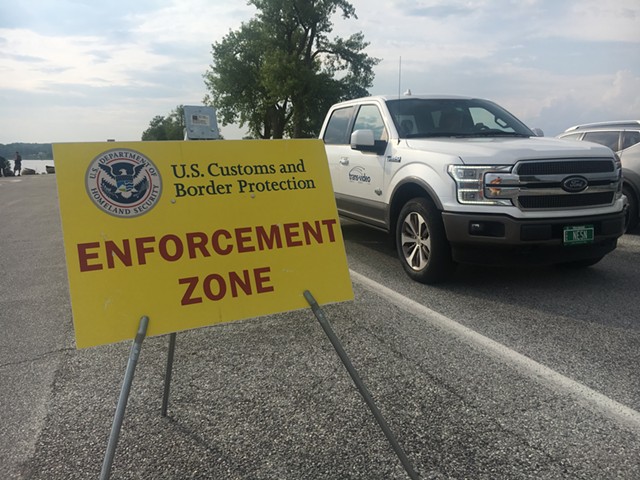 A federal judge on Tuesday ruled that border patrol agents cannot search electronic devices without “reasonable suspicion,” a decision that the American Civil Liberties Union has called a major victory for privacy rights.

The case, heard by Massachusetts U.S. District Judge Denise J. Casper, involved 11 plaintiffs who were searched at ports of entry around the U.S. That includes the Vermont-Québec border, where Ghassan and Nadia Alasaad were detained for six hours along with their 11-year-old daughter while traveling on a family vacation two years ago. The Alasaads are naturalized U.S. citizens who live in Massachusetts.

Esha Bhandari, staff attorney with the ACLU’s Speech, Privacy, and Technology Project, said in a press release that the ruling “significantly advances Fourth Amendment protections" for millions of international travelers who enter the country each year.

“By putting an end to the government’s ability to conduct suspicionless fishing expeditions, the court reaffirms that the border is not a lawless place and that we don’t lose our privacy rights when we travel,” Bhandari said in the release.

The ACLU filed the 2017 suit with the Electronic Frontier Foundation seeking to challenge the authority of federal immigration agents to conduct warrantless searches and seizures of electronic devices.

Casper's ruling says that any immigration enforcement policies that permit searches without cause are unconstitutional, and officers must now justify why they are searching someone's device, with specific reasons. Her ruling does not, however, require immigration agents to obtain a warrant, as the ACLU had hoped.

Several plaintiffs had their devices confiscated for weeks or months, including the Alasaads, who were detained at the Highgate Springs, Vt., border crossing and received their phones back after about 15 days. Two other plantiffs had their devices searched again in the time since the suit was filed, according to the judge’s ruling. None were ever charged with a crime.

Electronic searches at the border have increased significantly in recent years: Customs and Border Protection conducted more than 30,000 in 2018, nearly four times the total from three years prior, according to the ACLU.

The agency has defended the growing practice, calling it a necessary evolution in the digital age to combat terrorism and other illegal activity.

But such governmental interests, while "paramount," must be weighed against an individual's right to privacy, Casper wrote, especially when considering electronic devices capable of storing “a trove of personal information.”

For the Alasaads, that included photographs of Nadia and her daughter without the headscarves they wear in public, in accordance with their Muslim faith.

The family was detained at the Highgate Springs crossing after vacationing in Québec, a trip they cut short because their daughter had gotten sick.

Five hours into their detainment, an officer ordered Nadia to unlock her phone, the ACLU said. She objected, but the couple eventually wrote down the password after an officer said he would confiscate her phone if they didn't unlock it.

When the Muslim woman stressed that a male could not search the phone because of the photos, she was told it would take two hours for a female officer to arrive, the ACLU said.

Worried for their sick daughter, the family eventually left without their devices. When they received them two weeks later, videos of their daughter’s graduation had disappeared, the ACLU said.

Other plaintiffs saw officers search devices that had journalism-related documents or attorney-client communications.

As Hundreds Protest ICE, Border Patrol Runs a Checkpoint
By Derek Brouwer and Matthew Roy
Off Message
The ruling comes at a particularly contentious time for the border patrol and its sister agency, Immigration and Customs Enforcement. The departments have faced an onslaught of public scrutiny for their tactics under President Donald Trump, including here in Vermont.

This summer, several hundred protesters marched through Williston to the ICE intelligence center there to protest the Trump administration’s family separation policies and illegal immigration crackdowns. Nineteen people were arrested.

That same day, border patrol agents ran a checkpoint along the causeway that connects South Hero to Milton, halting drivers to check on their citizenship status.
Prev
Next