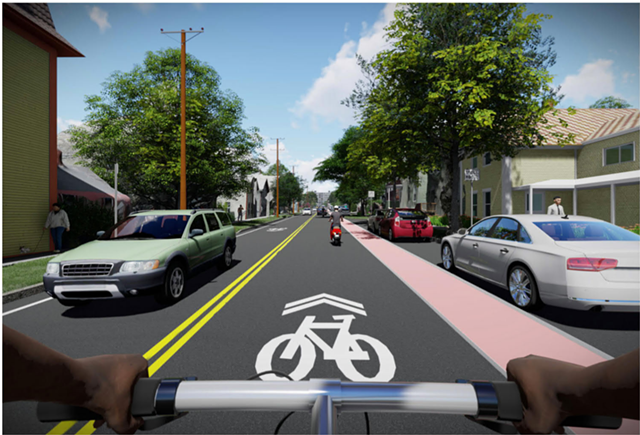 A half dozen residents urged Burlington city officials Wednesday night to redesign the Champlain Parkway to minimize negative impacts on low-income residents and people of color.

The city hosted a public hearing — on Zoom and in person at the Department of Public Works garage — to discuss a new report on the parkway, a 2.8-mile roadway planned for Burlington's South End. First envisioned in the 1960s, the road will connect I-189 and U.S. Route 7 with the city's downtown.
Environmental concerns and legal appeals have delayed the project for decades.

The city has billed the parkway as a solution to alleviate traffic, but meeting attendees contended the very opposite. They said the project will route more vehicles through the Maple and King street area, one of the poorest neighborhoods — and the most diverse — of the eight impacted by the project.

"This is an ill-conceived idea because this neighborhood is full of low- to middle-income people ... that depend on walking," Mayumi Cornell said. "There are children that live in this neighborhood, and somebody will die. It will be most likely a Black or brown child."

The Federal Highway Administration commissioned the report, called a Limited-Scope Draft Supplemental Environmental Impact Statement, to assess the environmental justice impacts on minority and low-income communities in the Maple and King street neighborhood. Just over 18 percent of residents there are minorities — compared to 17.1 percent of Burlingtonians overall — and the median household income is just under $35,900, the report says.

Neighborhoods around Birchcliff Parkway, Home and Flynn avenues, and South Meadows will see lower traffic volumes, the report found, but those in the Lakeside Avenue, Calahan Park, and Maple and King areas will have more traffic once the road is built. It says the road will not impact noise levels or air quality in any of the neighborhoods, and each area will see either a positive or neutral impact on traffic safety.

"The project will improve transportation mobility and safety for all users and will not cause disproportionately high adverse effects on the Maple and King street neighborhood," said Kevin Walsh, a transportation planner consulting with the city.

Mark Hughes, the coordinator for the Vermont Racial Justice Alliance, said the coronavirus pandemic has laid bare the inequities faced by Black and brown people. He worries that the parkway design could further marginalize these communities in Burlington.

"I'm insulted ... that you're trying to convince us that the air quality and noise level in that neighborhood is going to either be the same or be reduced. In short, that is just complete nonsense," he said. "I stand in total opposition to this project. I think if it has to happen like this, I say, 'Kill it.'"

Tony Redington, a member of the grassroots Pine Street Coalition, said the design "is a clear case of embedded racism" and said it's unacceptable in Burlington, which just declared racism a public health emergency.

Burlington, Community Organizations Declare Racism a Public Health Emergency
By Courtney Lamdin
Off Message
His coalition has proposed a different design called New Street, which Redington says would avoid the disproportionate traffic impacts at King and Maple. The concept calls for 1.5 fewer miles of new roadway than the city's design and uses roundabouts where the city calls for traffic lights.

"I don't think there's a traffic engineer in the world that would suggest to you that converting an all-way stop intersection to a traffic signal does anything for pedestrians but increases the likelihood, frequency of injury" by 20 percent, Redington said.

Kelly Devine, executive director of the Burlington Business Association, weighed in before the meeting. In a statement, Devine said the report "did not identify any new obstacles." She urged other BBA members to submit comments in favor of the project.

“Shoppers and workers heading downtown are frustrated by current congestion on north-south arteries such as Shelburne Road, which is overtaxed,” Devine's statement said. "More transit options will not only alleviate traffic congestion, but also help catalyze growth, productivity gains, and business recruitment in the city."

Residents have until August 24 to submit their feedback on the report. The highway administration will review the comments and either request additional changes to the project design or give it a stamp of approval, according to Walsh.