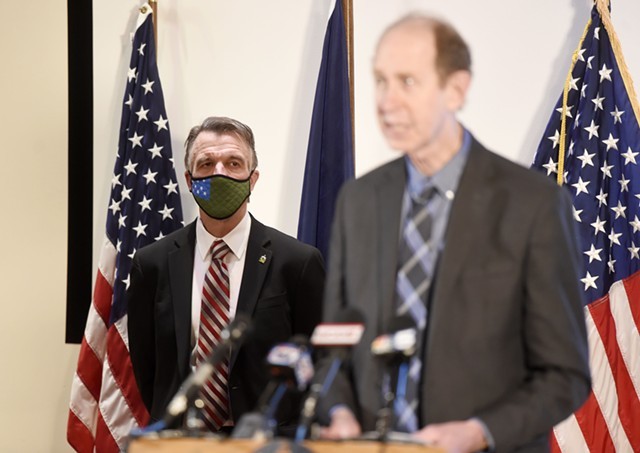 At a press conference on Tuesday, Gov. Phil Scott told Vermonters that he’d sign an executive order declaring September 8 the first day of class for schools around the state.

A task force assigned to create guidance for schools had issued its recommendations on June 17. The later start date will give districts more time to implement and test new protocols, Scott said, and give anxious families and teachers the confidence that in-person education — a format the governor favors — is safe.

Members of his administration echoed the sentiment.

“Based on the trends that we’ve been seeing for some time now, I continue to believe we’ve come to a point in our response to this virus that allows us to bring our children back to school in a carefully considered, measured and safe way,” Health Commissioner Mark Levine told reporters.

Scott to Order Schools to Reopen September 8
By Kevin McCallum
Off Message
As the Scott administration was publicly pushing for in-person instruction, the task force was working behind the scenes, considering changes to its guidance that could make such a format easier to implement. The group, composed of doctors and educators, may reduce from six feet to three the amount of distance at least some students must maintain while in the classroom, based on emerging research on how the coronavirus affects children.

The new guidance could be issued as soon as next week.

Dr. Wendy Davis, a former Vermont Health commissioner and member of the “Safe and Healthy Schools Task Force,” said the six-foot recommendation was made in June and represented a “conservative approach.” Based on new data from international studies, the American Academy of Pediatrics has since decided that schools can consider three to six feet of social distancing, something the task force is now “revisiting,” she said.

It's unclear whether the new distancing rule would apply to all students. Some research has shown younger children are less likely to transmit the coronavirus than adults, and even teenagers.

Davis serves as a regional chair of the American Academy of Pediatrics and is on the executive board of the group’s Vermont chapter. “This is going to continue to change, and I think that’s one of the hardest things for people to accept,” Davis said. “We are doing the best we can with the data we have now, but as new information comes in, we’ve got to revisit the thinking.”

Dr. Breena Holmes, the Vermont Department of Health’s maternal and child health division director and a member of the task force, also confirmed Tuesday that the group is considering a change to the six-feet distancing recommendation.

It’s unclear what the amended state guidance would mean for school districts, many of which began releasing preliminary school reopening plans last week. Holmes said that the Department of Health “acknowledges that schools have produced plans that may need revision in the weeks ahead as science evolves.”

Champlain Valley School District Will Use 'Hybrid' Model This Fall
By Alison Novak
Off Message
The Champlain Valley School District, the state’s largest, is among several that has introduced plans to bring students back into school buildings for just two days a week this fall. According to Superintendent Elaine Pinckney, that decision was made, in large part, by the Department of Health and Agency of Education’s recommendation that the best practice was for students’ seats to be separated by six feet.

With such spacing requirements, there was no way school buildings could accommodate all students at the same time, she said.

The district created its reopening plans after numerous meetings with other superintendents, as well as calls and webinars with Education Secretary Dan French, Health Commissioner Levine and Holmes, Pinckney said.

“If the guidance changes, we will have another conversation,” Pinckney told Seven Days in an email. “But I can tell you, as one superintendent, it is very frustrating to be out this far with a plan and then hear (through the grapevine) that the guidance indeed may change.”

Sixteen districts in Chittenden, Franklin, Grand Isle and Addison County — members of the Champlain Valley Superintendents Association — announced their intention to offer a hybrid reopening model this fall, in which students in grades K-12 will attend in-person school two days a week and engage in remote learning the remaining three days. Some of those districts —including the Champlain Valley School District — announced that families can also opt for fully remote instruction.

Related Is it Safe for K-12 Students to Return to School Amid the Pandemic?

Is it Safe for K-12 Students to Return to School Amid the Pandemic?
By Ken Picard
Off Message
The Vermont chapter of the American Academy of Pediatrics — which is composed of active and retired pediatricians, pediatric residents, and medical students throughout the state — released a statement on Monday that seemingly contradicted some districts’ recently announced K-12 hybrid plans. The chapter called on schools to “prioritize full-time, in person attendance for all students preschool through grade 5 and students of all ages with special needs.”

Vermont is “uniquely poised to be moving towards in-person learning because our case positivity rates are so low, and because we are using science to guide us,” Bell said. “I would ask Vermonters to take their gaze off the national scene and instead look toward our local leaders … and trust that they will provide the best guidance and, most importantly, adapt the guidance in response to evolving evidence.”

The group’s statement emphasizes schools’ role in supporting students’ academic, social and developmental needs and in addressing food insecurity and providing mental health services. It cites data that suggest children are less likely to become infected with COVID-19, less likely to develop severe disease and, particularly in the case of younger children, less likely to transmit the coronavirus.

The statement also points to reassuring school-based research from European countries with low rates of disease transmission, including Denmark, Norway, Holland and Germany, to suggest that Vermont, with its low COVID-19 prevalence rate, “can model our approach to school opening on the European experience.”

Other New England states are considering similar options. In its school reopening guidance, Massachusetts has allowed for three feet of distance between students’ desks. But the proposal prompted concern from teachers and parents, the Boston Globe reported earlier this month, and some Massachusetts superintendents have said they are still planning for six feet of distance between students.