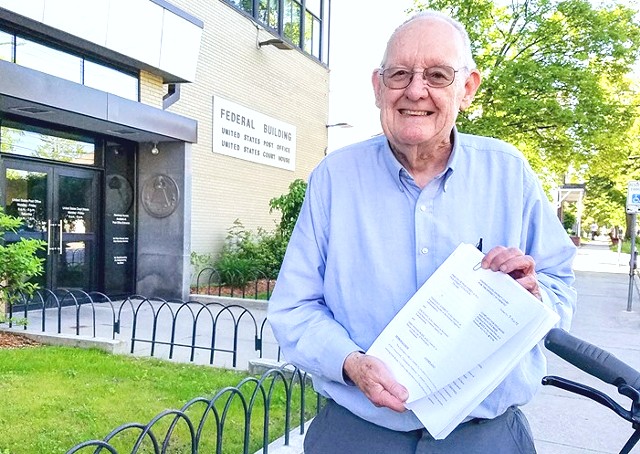 A group of citizen activists is seeking an injunction to keep the City of Burlington from building the long-planned Champlain Parkway connector.

The Pine Street Coalition — a grassroots group of 150 people who want a “cheaper, greener, quicker and much safer roadway” — filed a lawsuit in federal court last week that asks a judge to halt construction of the 2.8-mile road in Burlington’s South End, which has been planned since the 1960s.

Champlain Parkway Construction Could Begin by Year's End
By Courtney Lamdin
Off Message
“We want a modern road, a road that does divert traffic around neighborhoods, a road that provides multimodal forms of transportation,” Goodkind said.

The group’s main contention is that the project’s 2009 environmental impact statement is stale because it relies on outdated population data, traffic models and land-use patterns. Pine Street Coalition member Tony Redington said the design is a “vestige of the 1950s and '60s that doesn’t fit the needs of today.”

“Both the project and the natural and human communities through which it passes have significantly changed,” the 29-page filing reads. “The pace and magnitude of those changes has increased in the last 10 years since this project last went through [National Environmental Policy Act] review.”

Just last month, however, the Federal Highway Administration ruled that the decade-old environmental review was still valid. Redington said this lawsuit effectively appeals that decision, and he thinks the public, if given the opportunity, would support a redesign.

“This design is hurtful to the South End,” he said. “This design needs to be stopped and a new one considered.”

The suit comes just after the project reached a major milestone: The Burlington City Council approved the parkway’s design and construction budget on June 3, moving the long-delayed project one step closer to reality.

The suit asks for the court to issue a judgment in the coalition’s favor, and barring that, to stop construction until the case is heard.

Spencer rebutted the characterization that the parkway design is unfriendly to pedestrians and bikes, noting that the plans call for raised intersections, crosswalks and shared-use paths that will calm traffic. He said the city anticipated this lawsuit and plans to go out to bid this summer.

City attorney Eileen Blackwood declined to comment on the suit's specifics until it's officially served on City Hall.

“We haven't had a chance to analyze it,” she said. “We’re still understanding and figuring out what we’re going to do.”

Blackwood said the mayor stands by his statement last spring that "the time for debate, amendment and appeal has long passed." The city maintains that the 2009 environmental statement is valid, she said.

Read the lawsuit here:
Correction June 13, 2019: The city's $3.2 million portion of the project is for its 2 percent share as well as other expenses. A previous version of this story was incomplete.
Prev
Next