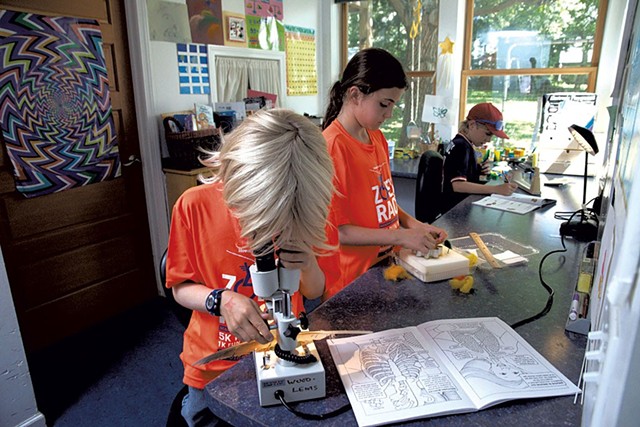 When Vermont schools went remote in mid-March to slow the spread of COVID-19, Bridget Butler of St. Albans suddenly found herself having to facilitate at-home learning for her three children, ages 7, 8 and 9.

Butler —a naturalist who runs programs about birding and bird conservation through her small business, Bird Diva Consulting — started the quarantine with a color-coded schedule, which she thought would help organize the days.

“Of course, it all blew up by the second day,” she recalled with a laugh.

By April break, her family had abandoned online learning in favor of a more relaxed routine.

Butler started seeing some of the positive aspects of having her kids at home. The stress of hustling to get three kids up and on the bus by 7 a.m. every morning disappeared. The “witching hour” — that time at the end of the day when everyone is tired and cranky — also vanished. Her kids began learning at their own pace and had time to explore their personal interests.

Those factors, as well as the uncertainty of what school will look and feel like in the fall, spurred Butler to make the decision to withdraw her children from St. Albans City School and homeschool them this coming school year. This week, she submitted the necessary paperwork to the Agency of Education.

“I’d rather create my own hoops to jump through than jump through other people’s hoops,” she explained, adding that she’s hopeful her kids will be able to go back to in-person school when there’s a coronavirus vaccine.

Randi Becker of Williston will also be homeschooling her three children, ages 5, 8 and 11, this year. Her older son attended Williston Central School last year, while her two younger children went to Lake Champlain Waldorf School, an independent school in Shelburne.

Becker, an art therapist, said the main reason she’s choosing to homeschool is that she doesn’t want her kids to be learning online all day. In the spring, her 11-year-old son spent the bulk of his school time doing “very task-oriented work,” and she looks forward to a schedule in which learning isn’t “all day long, just checking boxes off of what to complete.”

For her youngest son, who is entering kindergarten, Becker said she didn’t want his first experience with elementary school to be defined by online learning, wearing a mask and “washing his hands 70 times a day.”

Becker said that being together with her three kids will create “some semblance of normal” and provide opportunities for hands-on learning.

She’ll use an offline curriculum purchased from Oak Meadow, a Brattleboro-based K-12 homeschool curriculum company, to structure her kids’ academics. She’ll supplement it with an online art program, one day a week at an in-person homeschool program through New Village Farm in Shelburne, and projects such as breeding rabbits and baking bread.

Becker said she had a lot of anxiety about the coming school year before making the decision to homeschool.

“To know what we’re doing feels so much better,” she said. “When I made the decision, I said, 'I know where we're going to be. The world could be on fire and we’re going to be here.’”

Valerie Wood-Lewis of Burlington is a mother of four — ages 17, 16 and 14, as well as son Ben, who died at age 15. A licensed teacher and cofounder of Front Porch Forum, she’s been homeschooling her children since her oldest was in kindergarten. She also conducts end-of-year assessments for homeschooling families that they can submit to the state as evidence of their child’s learning.

Wood-Lewis calls homeschooling “very doable” for most kids and thinks many families are unnecessarily overwhelmed by the prospect.

“I think if you can kind of go back to the roots of education and think about what you want your young person to grow into and work backwards from there, your day has a lot of pieces in it that are easy to pull off,” she said. Some of those organic opportunities for learning include spending time outdoors, reading, meditation and exercise, menu planning, and building things.

Butler said she’s excited about designing a nature-based curriculum based on her kids’ passions. Since they’re interested in maps, she said, she plans to do a map-making project that incorporates math, reading and science. She said her kids are excited, too.

Butler recalled a recent morning in which she was doing origami alongside her daughter.

“That’s math and spatial thinking. We were learning together. We just had this beautiful moment,” she said. “I kept thinking, This is what it can be like.”

The story headline and references within were updated at 10:30 p.m. on July 23, 2020, to reflect that "enrollments" is a more accurate term than "applications" to describe those who have filed paperwork with the state to pursue homeschooling.
Prev
Next