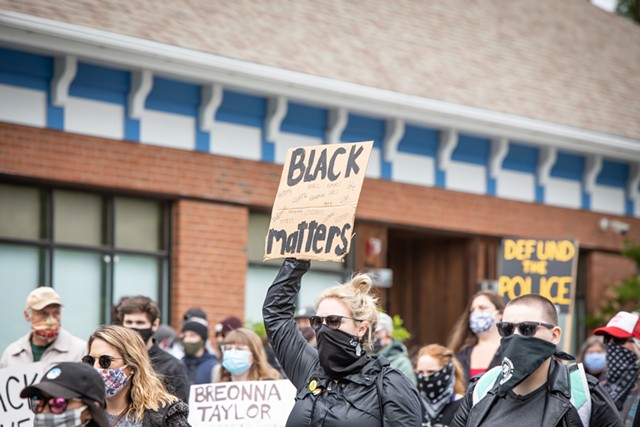 A few hundred demonstrators on Saturday urged a boycott of a Colchester sandwich shop whose owners are accused of making racist statements about nationwide police protests.

The group marched past the Hoagie Hut in Bellwood Plaza chanting, "Black lives matter" and "No justice, no peace!" before reconvening in a grassy area along Prim Road for rousing speeches about the legacy of American slavery in the country's criminal justice and economic systems.

"They are just a piece of the systemic racism, covert and overt, in our community," co-organizer Evelyn Monje, a 17-year-old Winooski High School student, said of the restaurant.

Saturday marked the third consecutive weekend of protests held in cities and towns across Vermont where attendees have called for a radical reimagining of public safety. Similar rallies have sprouted across the country in the weeks since police in Minneapolis killed George Floyd on May 25. Also on Saturday, hundreds of people in Montpelier helped paint Black Lives Matter in capital letters on the street in front of the Statehouse.

The location of the Colchester event, which was promoted by the Burlington-based Peace & Justice Center and the Rooted Organizing Collective, was spurred by a June 2 Facebook post by a woman who claimed to have recently overheard a racist rant by the owners of Hoagie Hut while she was at the restaurant. One of the owners, the woman wrote, said police protesters "should all be shot" and that "people don't know how bad blacks really are until they live around them." The post has been shared hundreds of times. 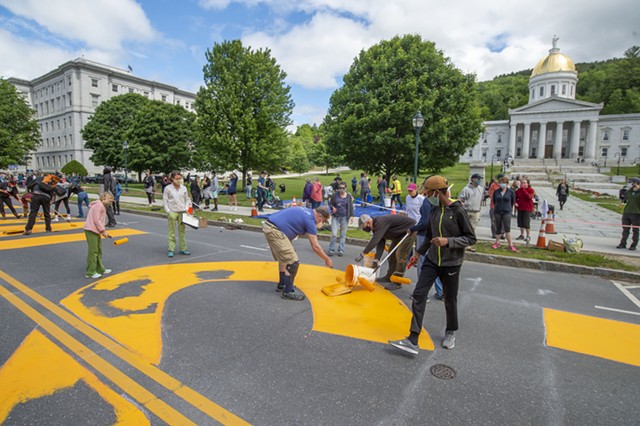 Monje and co-organizer Olivia Pintair urged fellow protesters not to patronize the restaurant unless its owners apologize and "pledge to educating themselves in their racism."

Though protesters marched past the store, Monje instructed them not to stop or linger near it, so as not to distract from the "systemic" injustices the group also sought to highlight.

In so doing, the protesters expressed support for the burgeoning police divestment movement that has put pressure on public officials in places such as nearby Burlington, where hundreds of activists have called in to city meetings to present such demands.

"Defund the police," as some protesters' signs read, is a slogan for a range of reforms that involve shrinking or eliminating armed police forces in favor of alternative forms of public safety that advocates say will better promote social justice. Standing on a picnic table and speaking through a megaphone, Pintair told the mask-clad protesters that American police act as enforcers of a racist system, intentionally or not.

"We need to invest in systems that keep each other safe, not in one that is shown statistically and viscerally to cause exponentially more harm than good for black and brown communities," she said, as Monje held a fist in the air alongside her.

"We stand for creating a different society that is safe for everyone by investing in our communities instead of in the institution of policing that is responsible for the murders of George Floyd, Breonna Taylor, Tony McDade, Ahmaud Arbery, Maurice Gordon, and thousands more," Pintair continued.

During a second round of speeches, Winooski science teacher and former Rwandan refugee Mugabo W'Ishema Thierry Uwilingiyimana cast racism as inherited ideology that sprang from the economic self-interest of slaveholders.

George Floyd's Death Spurs Vermonters to Call for Police Reform
By Derek Brouwer, Colin Flanders, Courtney Lamdin and Matthew Roy
News
"It's not about fighting the hate. It's about getting to the root of this capitalist system that has dehumanized a whole group of people and essentially bought your silence," he said.

The teacher urged the crowd not to "dehumanize or try to shame" the Hoagie Hut owners. "Let's understand where that hate is coming from," he said.

Organizers called upon those who had gathered to actively combat racism rather than merely strive not to be racist themselves.

"We need to be in full-blown rebellion," Pintair said. "Otherwise, we are complicit."
Prev
Next