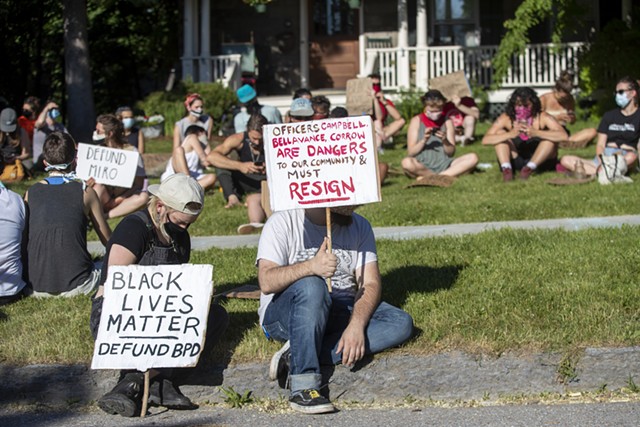 Armed with a sousaphone, drums and several loudspeakers, the activists took over the otherwise quiet Hill Section street, blocking traffic with their cacophonous parade. Chants of "Black lives matter" alternated with "Hey hey, ho ho, Mayor Weinberger's got to go."

Activists have mobilized in recent days to denounce Weinberger's fiscal year 2021 budget proposal. After calls to defund police, the mayor proposed not filling 12 vacant officer positions in order to trim $1.1 million from the proposed $17.4 million police budget. In the wake of the killing of George Floyd in Minneapolis, Burlington activists have demanded that the city trim much more — 30 percent of its force — and invest the funds in communities of color.

Cut the Police: The Bid to Slash Law Enforcement Funding in Vermont
By Dan Bolles, Derek Brouwer, Colin Flanders and Courtney Lamdin
Crime
They've called in to public meetings by the hundreds, forcing the Burlington City Council to hold three straight meetings this week so that people signed up to speak could do so. Wednesday night's meeting commenced as the marchers started toward the mayor's home, with City Councilor Perri Freeman (P-Central District) among them.

This latest demonstration was seemingly spurred by Weinberger's early departure from two city council meetings this week, once for a family commitment.

"Miro is a copsucker," read another.

The group broke into a dead run when a white SUV pulled out of Weinberger's driveway and away from the crowd. After a short chase, protesters parked themselves in the street and on Weinberger's lawn, unsure whether he was still inside.

They set up a PA system to broadcast the ongoing city council meeting, held via Zoom. One protester Zoomed in from Weinberger's front yard and addressed the council, prompting cheers from the crowd — and a plea from the mayor.

"I'm sitting down here at the mayor's office. If you want ... my attention, I'll be here at city hall until midnight," Weinberger said. "I would welcome that as opposed to the direct action that is directed at my daughters."

(Weinberger's spokesperson said on Thursday morning that the mayor's wife and two children had been in the vehicle.)

Protesters lingered for a few minutes before proceeding down Main Street toward downtown, commandeering a lane of traffic. Several drivers honked their horns and waved. A Black man stopped his vehicle alongside the mobile protest to show participants his Black Lives Matter T-shirt.

Aspen Kobetitsch was there to speak out against Weinberger's support for police.

"It's clear that Miro loves the idea of cops," Kobetitsch said. "And because of that, it shows me that he doesn't care about our communities of color literally at all."

Aedan Buchanan, who attended the march with Kobetitsch, said the mayor isn't listening to the public.

Emma Levy agreed: "He's supposed to be representing the people's voice, and I don't think he's doing a good job of that," she said.

"One thing that was really frustrating was seeing Miro look like he almost couldn't be bothered to be there," Heaghney said. "I want to come out here tonight to let him know that we're here for real. This is for real, and there's changes happening. And I do not think this town of Burlington should be left behind in those changes."

When the protesters reached Church Street, they stopped in front of city hall. When Weinberger didn't emerge, they walked up and down Church Street. Several people dining outdoors took photos and joined in the chants or raised a fist in solidarity. 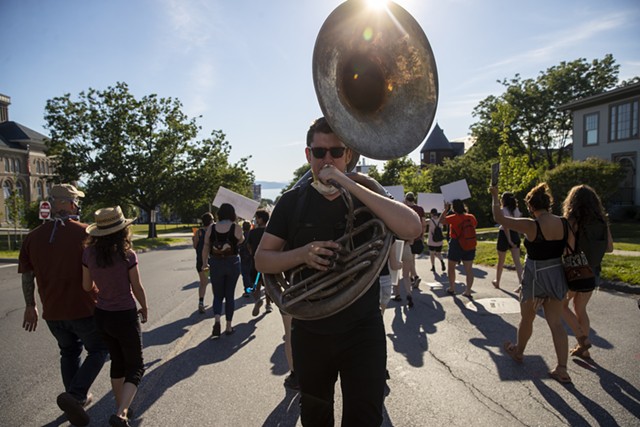 Back in front of city hall, Rep. Brian Cina (P/D-Burlington) was filming the gathering. Cina is a member of the Vermont Racial Justice Alliance, a people-of-color-led advocacy group that is leading the local calls for reform. He's also one of three lawmakers who have urged their colleagues to divert at least 20 percent of the Vermont State Police budget to other community services.

Cina said he didn't protest in front of Weinberger's home, opting to join the effort once it reached downtown. "I feel like that for me, as an elected official, there's a respect I would want to have," he said.

Picketing at homes isn't unprecedented in Chittenden County, but it's not been common. In 2012, protesters gathered in front of the Burlington home of Lenore Broughton, a wealthy super PAC financier who sought to sink then-governor Peter Shumlin's single-payer health care plan. PAC representatives accused demonstrators of “bullying” and “intimidation.”

In 2014, a group opposed to Vermont Gas Systems' plan to run a pipeline from Burlington to Middlebury staged a protest on the company president's lawn in Hinesburg, claiming in a press release that they'd "temporarily seized" the property. They left shortly after police arrived.

"The mayor has young children. They should not be terrorized. That is not what our political process is about," Shannon said. "And knowing that, I am going to get off this call, because this is really getting to a place that I am not comfortable with."

Shannon eventually returned to the meeting, but her absence didn't go unnoticed.

"Don’t even talk to us about terror," read a tweet from the Vermont Racial Justice Alliance. "That is what Black and brown people can feel daily in Vermont, in real ways."