Vermont Officials Detail Plan for Moving Homeless Out of Motels 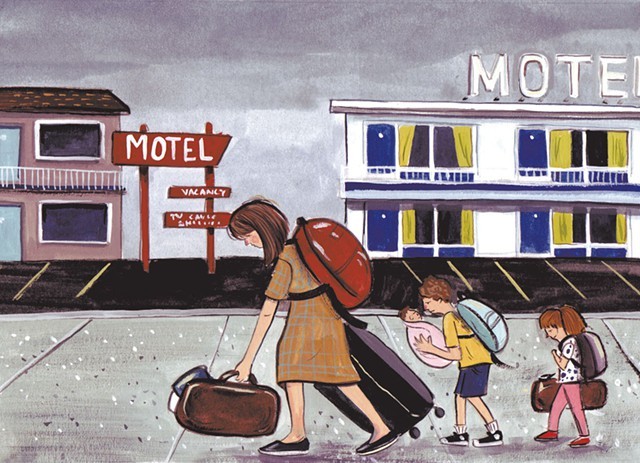 To date, the state has spent about $13 million to house and feed homeless people in local lodgings since shelters were forced to close in March as the coronavirus pandemic spread in Vermont.

Homeless advocates have worried that the program would soon end, forcing many to return to shelters or other unsafe living situations.

But officials in Gov. Phil Scott's administration said on Thursday that they think their plan can eliminate homelessness for families in Vermont while making great strides to find permanent housing for single people, as well.

“There is a push here to effectively end family homeless,” Geoffrey Pippenger, program director for the state's General & Emergency Services Program, told lawmakers. “We see this as an opportunity to actually get at that population in a more supportive and permanent way.”

The plan calls for spending $16 million of Vermont’s $1.25 billion Coronavirus Aid, Relief and Economic Security Act funds, which must be used by the end of the year, as well as another $7 million in state funds.

The $23 million would be spent on a variety of programs to help people find and afford safe housing, address pressing financial problems such as car repairs and help convince more landlords to rent to formerly homeless people.

The goal would be to “work with households to brainstorm and develop practical solutions” to their housing problems that don’t necessarily involve state support, he said.

The priority is finding permanent homes for families with children, Pippenger said. About 90 percent of homeless people don't have children in their care, making housing all families in the state a “reachable goal,” he said.

The plan would more than double the amount of rental subsidies for about 250 families now in motels to ensure that they get into more stable housing, Pippenger said. The cost is estimated at $2.5 million.

“That seems like something we should prioritize,” he said.

Another key component is $3.8 million for one-time grants to people who need the financial resource to get into a rental or back on their feet financially.

Officials estimate that 720 people might qualify for grants of between $2,500 and $8,000. The funds could cover a variety of expenses, such as car repairs, moving expenses and debt relief. The grants are designed to be flexible because the problem is often more than just being able to come up with the first and last month’s rent, Pippenger said.

To expand the number of landlords willing to rent to the homeless, the plan also proposes a $250,000 “risk pool” designed to allow landlords to recoup money if there is unit damage or other losses.

“This is not just about the client and the service provider, but also trying to support the housers, as well,” Pippenger said.


Not all of the people currently in motels and hotels were previously in shelters. About 120 people came from housing situations that shifted due to the COVID-19 response, said Sean Brown, deputy commissioner of the Economic Services Division of the Department for Children and Families.

The state is housing 56 people released from the Department of Corrections, 26 from mental health treatment centers, 28 from substance abuse or recovery housing, and 10 people who had been in a long-term-care home, Brown said.

Officials plan to winnow down the number of people staying in motels over a period of months, and requirements for receiving the vouchers will soon change, Brown said.

In the future, working with social workers to find new housing "would be a condition to continue to receive housing in a motel," he said.

The plan was well received in some quarters. Chris Donnelly, director of community relations for the Champlain Housing Trust, called it a “thoughtful, ambitious proposal.”

“We’re a little concerned over the level of support available for single adults, but the goal to end family homelessness is laudable, and hopefully reachable, with this plan and future investments,” Donnelly said by email.

Lawmakers expressed appreciation but confusion at times over how the plan meshed with other housing proposals by the administration and the legislature itself.

The proposal, which focused on services, is separate but integrated with an Agency of Commerce and Community Development plan to boost housing stock. And on Wednesday, the House General, Housing and Military Affairs Committee moved its own bill, which contained $53 million in housing assistance.

Rep. Tom Stevens (D-Waterbury) said he appreciated the work that has gone into the plan but said it was “still up in the air” whether it was sufficient. He noted that the legislature needs to take a close look at not only using federal funds to house people now, but at whether the state has the funds to continue housing them in the future.

“I would hate to see us spend money on this problem for one year, and a year from now pass a budget that cuts these same services back,” Stevens said.

Updated June 12, 10:03 a.m.: An earlier version of this story incorrectly identified the state division at which Sean Brown is deputy commissioner.
Prev
Next