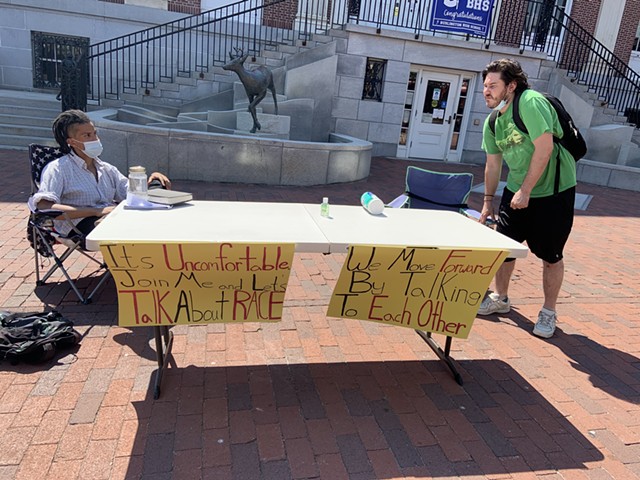 Danyeh Gutema knows how hard it is for people to talk about race, especially in the current political climate. So this summer, the 21-year-old college student, who is Black, is devoting two hours each day to sitting on Burlington's Church Street and inviting strangers to sit down and have a conversation with him.

“How do we move forward? How do we come to solutions? It’s by talking to one another, sharing ideas [and] by communicating,” Gutema said. “That’s how you humanize a movement.”

Under a sweltering Tuesday afternoon sun, a masked Gutema sat in front of Burlington City Hall with two hand-lettered signs taped to his folding table that read, “It’s uncomfortable. Join me and let’s talk about race,” and “We move forward by talking to each other.”

A Vermont native, Gutema is studying environmental engineering at Cornell University in Ithaca, N.Y., and is home for the summer. As he explained, the killing of George Floyd at the hands of Minneapolis police last month sparked a lot of anger in him, but also a desire to address issues of racial inequality in a more productive way than just exchanging barbs on social media.

So Gutema decided to put his own issues on the table — literally — and invite strangers to sit down and discuss them face to face.

As this reporter arrived Tuesday afternoon, Gutema was just finishing a friendly conversation with a white man in his mid-twenties, who shared his own experiences with law enforcement and how he believes society needs to improve the selection and training of police officers. On the table in front of them was Gutema’s copy of the book The New Jim Crow: Mass Incarceration in the Age of Colorblindness, by Michelle Alexander.

After the man left, Gutema described his own experiences as one of only a handful of Black students at Essex High School as “very positive,” with few incidents of overt racism. Nevertheless, he pointed out that systemic racism isn’t just about overt hostility, but how he and other people of color must be hyper-vigilant about their own behavior and how easily it can be misinterpreted by those in the dominant white culture.

“So, if I walk into a store and I don’t buy anything, I’ll be super self-conscious that this [shopkeeper] is eyeing me,” he said. “Are they going to think I’m a thug, that I’m a criminal, that I’m stealing from them? Do I have to speak more eloquently? Do I need to prove myself?”

Even when he’s with his white friends, Gutema said, he learned from an early age that when interacting with police, he needs to take things slow, keep his hands visible at all times and answer questions with “Yes, sir” and “No, sir.” As he put it, issues that white people never have to think about can be matters of "life or death" for Black people.

Though Gutema has only been out on Church Street since Monday, he said he’s already had more than a dozen conversations with passersby, nearly all of them white. And with the sole exception of one man who shouted something derogatory from a distance, he added, all of those interactions have been respectful.

In a follow-up email Wednesday, Gutema described other conversations he’d had later Tuesday afternoon. They included one with a man who brought up a concern he had about how some members of the LGBTQ community feel left out of the Black Lives Matter movement.

“I was not familiar with that issue,” Gutema wrote. “However, it got me thinking about the importance of inclusivity within the Black Lives Matter movement and making sure that people from all backgrounds are included.”

Despite some initial discomfort that some people have when broaching the subject of race, Gutema said, all of his conversations have been very productive. And he said he's resisted the tendency to reduce race relations to false dichotomies such as Black versus white or liberal versus conservative.

“There is no one solution,” he said. “There are a million solutions to the problems in our world. So let’s talk and start solving them.”

Gutema plans to be on Church Street most weekday afternoons from 3 to 5 p.m., weather permitting.
Prev
Next