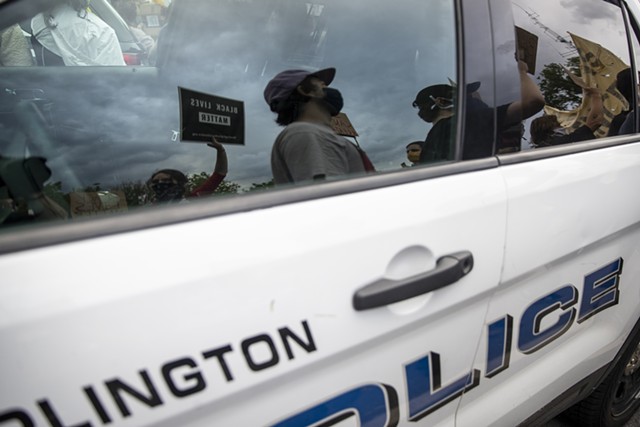 More than a dozen people Zoomed in to a Burlington Board of Finance meeting Thursday evening to demand that the city defund its police department and reallocate the cash to services that help communities of color.

The activists also called for the city to fire Burlington police officers Jason Bellavance, Joseph Corrow and Cory Campbell, all of whom were involved in violent altercations with members of the public, particularly black men, in 2018 and 2019. A change.org petition demanding that the department fire the three cops has netted more than 70,000 signatures.

"Anything less than defunding and redistribution perpetuates fear and violence in our community, as we've seen across the country," Lydia Kern told the board. "If this seems radical to you, I challenge you to simply start thinking about it as the right thing to do."

The pleas for justice came days after more than 1,000 people gathered in Battery Park to protest police brutality. The demonstrators last Saturday condemned the death of George Floyd, a black man who died last week after a white Minneapolis police officer knelt on his neck for several minutes. Floyd's death has sparked protests and rallies across the globe.

George Floyd's Death Spurs Vermonters to Call for Police Reform
By Derek Brouwer, Colin Flanders, Courtney Lamdin and Matthew Roy
News
The intense spotlight on the Burlington Police Department comes as the Board of Finance crafts the city's fiscal year 2021 budget, which has been decimated by the coronavirus crisis.

The police department accounts for $17.4 million — or about 22 percent — of the city's proposed $77.7 million budget for next fiscal year.

"It's an important time right now to just think of different ways of bettering our community and keeping people safe," Ezra Steinfeld said. "It just takes a little imagination to think of all the ways that we could be spending $17 million that aren't in upholding of a violent system of discipline."

Mayor Miro Weinberger said that police reform has been one of his biggest priorities over the last five years. He said he's open to discussing the issue but that budget cuts would set back the department's community policing efforts.

"As much as we'd like to see a world where there wasn't a need for police, that's not the actual world we live in," Weinberger said. "We're having a conversation about defunding police at a time where we've gone through a pretty intense period of needing the police to respond to active shooters, to respond to homicides."

"We are not professing that the only way to keep a community safe is by people who carry guns," Morrison said. "We're saying, right now, society does not have better alternatives."

She added: "You can't decrease your numbers [of police officers] without putting the community at risk."

City Council President Max Tracy (P-Ward 2) suggested that police officers could be slowly swapped out for workers who can meet other needs in the community. Some callers suggested redirecting police funds to counseling services, addiction clinics and social workers, among others.

Tracy, one of four councilors on the board, said he's never heard nearly 20 people weigh in on a budget item such as the policing one. He said the board should listen to the public and take action.

Related How Should Burlington Police Its Cops? In the Street, Activists Say

How Should Burlington Police Its Cops? In the Street, Activists Say
By Derek Brouwer
Crime
The renewed demand that the city fire the three officers in question forced police brass to update the department's website on Thursday. The "frequently asked questions" section says the department will not reopen any internal investigations into the officers because prosecutors, external investigators and internal staff have already reviewed in the incidents.

All three officers were disciplined, albeit with penalties that activists say were insufficient. Sgt. Bellavance was suspended for three weeks without pay for using excessive force against a black man, whom the officer knocked unconscious.

Officer Corrow was not suspended despite being involved in a similar incident because, former chief Brandon del Pozo said last year, the officer was breaking up a fight. Instead, Corrow was "counseled" that he should have contacted dispatch and requested backup.

Officer Campbell was reprimanded for using foul language but was otherwise not penalized for his altercation with Douglas Kilburn, who died days after Campbell punched him.

Burlington Cop Reprimanded for Profanity That Set Off Violent Altercation
By Derek Brouwer
Off Message
"There are no new facts that would warrant re-opening the employment actions," the statement reads. "All three officers remain employed by and are valued members of the BPD."

"Decisions have been made. There's nothing that anybody can go back and do now," she said. "You don't punish people twice."

The board took no action on the proposed budget Thursday evening. The group will meet twice more before Weinberger presents the budget to the full council on June 15.
Prev
Next