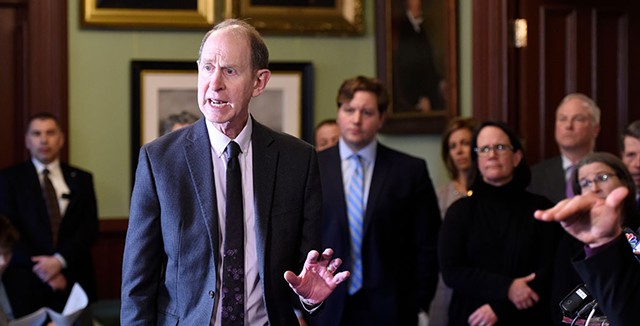 The recent cluster of COVID-19 cases in Winooski showed signs of a larger outbreak on Thursday, as health officials announced the biggest spike in new infections since the pandemic's April peak.

The Vermont Department of Health reported 36 new cases Thursday, with all but two of those new infections tied to Winooski. It's the sixth-largest single-day case total the state has announced since the first case was discovered in March.

Health Commissioner Mark Levine and city officials will hold a press conference at Winooski City Hall at 9:30 a.m. Friday morning to discuss the outbreak, shortly before Gov. Phil Scott is expected to allow some indoor dining to resume across the state.

The 34 cases represents a dramatic increase for the Onion City, population 7,300, and could leave it with one of the highest rates of confirmed coronavirus infections in Vermont.

The health department data show that at least 31 of Thursday's 36 cases are black or Asian people. Nine of the infections were found in children ages 9 or younger.

Winooski is the state's most diverse city; nationally and in Vermont, people of color have been affected by the coronavirus at disproportionate rates.

“We understand the fear and uncertainty that people in the community are feeling,” Levine said in a statement. “And we understand that every community has unique and diverse needs. We have been working closely with city leaders, community partners and service organizations to make sure that the people of Winooski get the information, care and supports they need to help prevent spread of the disease, and to keep their community safe.”
State officials have cautioned that case clusters were likely to pop up as the state emerges from lockdown. Further, increased testing of asymptomatic residents is likely to uncover more infections than were documented in the pandemic's first month, when testing was limited to people who showed certain symptoms.
Winooski is also the only city to have had a full week of free, walk-up testing, a possible reason more cases have been identified.

Thursday's results are from walk-up testing sites that have been held each day this week in Winooski. As of Wednesday, 271 people had been swabbed, according to the health department. The state does not collect demographic information about individuals who test negative.

Officials have not indicated how the outbreak began but had previously expressed confidence that they understand its scope.

"It's very early in the game, but I think we have a great idea of where the cluster is," Levine said at a May 29 press conference, adding that the "small number of cases" was not linked to a long-term-care home. "I'd like to give you the impression that we've made a good assessment of the situation and that people should feel confidence in that."

On Wednesday, the commissioner said that the first two walk-up testing clinics had revealed 10 to 20 more infections but that the results were still being validated.

"Our investigation of the outbreak in progress," he said.

Walk-up testing clinics are scheduled for June 5, 9, 12 and 23 at the O'Brien Community Center, 32 Malletts Bay Avenue, in Winooski. Residents can register online at humanresources.vermont.gov/winooski.