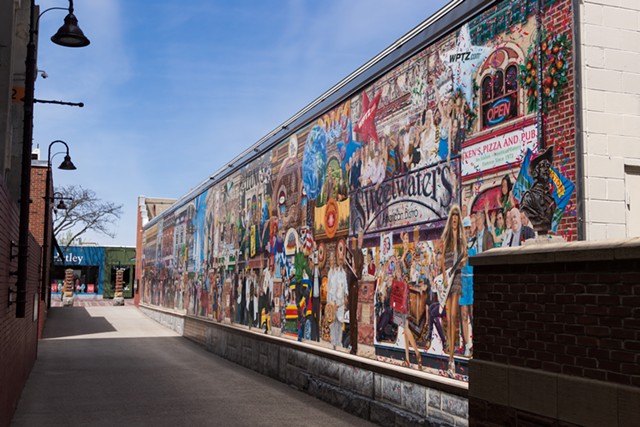 Burlington City Council members on Monday delivered a clear directive about the downtown "Everyone Loves a Parade!" mural: Get rid of it.

A resolution to remove or cover the controversial painting by the end of August passed 11 to 1. Councilor Joan Shannon (D-South District) voted no.

The packed virtual meeting also featured a vote on a proposal to expand the massive Cambrian Rise development on North Avenue by 180 apartments. That passed unanimously. And councilors received a briefing on the long-stalled CityPlace Burlington project, which yet again faces potential construction delays.

As the hour crept toward midnight, Councilor Brian Pine (P-Ward 3) explained that he introduced the mural resolution because the piece "is deeply problematic."

"It has divided us and caused pain in our community and does not accurately reflect our rich history as a people," he said.

The artwork was commissioned in 2009 to celebrate the 400th anniversary of explorer Samuel de Champlain's 1609 "discovery" of Lake Champlain. Critics say the mural is racist because it doesn't depict the state's Abenaki people, who lived in Vermont well before white European settlers arrived.

The city council voted in October 2018 to remove the mural by August 2022. Activists have defaced the artwork several times.

Mural Task Force Presents Recommendations to Burlington City Council
By Sadie Williams
Visual Art
In an impassioned speech, Councilor Zoraya Hightower (P-Ward 1) said that, leading up to the vote, she'd received hate mail containing racial slurs, along with notes from so-called allies who said she'd be racist if she voted against removing the mural. Most of the messages were from white people, said Hightower, who is black. That signaled to her that the issue wasn't a priority to "marginalized folks."

"To me it feels like we've doubled down with what I think honestly is some white privilege on removing this symbol of white guilt," she said, challenging activists to work with people of color "on issues that are close to them."

Councilors rallied around Hightower's sentiment, saying the mural should be removed so that the city can focus on making systemic change.

"I'm glad that this mural has gotten us talking about issues of racial justice in the city," Councilor Jack Hanson (P-East District) said, noting that the fact Hightower faced racism during the debate "just highlights the need for us to do work much more deeply beyond this particular mural."

Shannon, however, said she doesn't think the mural's removal should be accelerated during a global pandemic. It will also be expensive: The city previously estimated that it will cost $30,000 to remove the mural and fix damage to the underlying wall, according to Burlington City Arts executive director Doreen Kraft.

"This is a symbolic effort, and it's a very costly symbolic effort, and to the extent that we have funds to address racial issue and inequities, I think we should spend those funds ... in ways that meet a very real need in our community that go beyond symbolic gestures that maybe make us feel good," Shannon said. "I'm not defending the mural, but I am not willing to move this up on the priority list."

Shannon was outvoted, but earlier in the meeting, her mask-mandate resolution earned widespread support.

Shannon's measure passed the same day that Gov. Phil Scott allowed retail shops to reopen for business. Scott has required that retail workers wear masks but isn't in favor of doing the same for customers.

As Retailers Tentatively Reopen, Vermonters Shop for Sense of Normalcy
By Colin Flanders, Margaret Grayson and Sally Pollak
Off Message
Shannon, however, thinks masking up is a simple act that can protect everyone as the state begins to reopen.

"I think the public really wants to feel like they're safe in the shopping environment," she said. "And they want to support our downtown businesses, but they feel like they can't do that unless they feel protected."

The resolution is based on guidance from the U.S. Centers for Disease Control and Prevention, which requires people ages 2 and older to wear a facial covering in public. Exemptions are made for people who have difficulty breathing or who cannot remove a mask without assistance.

During the debate, Councilor Dieng moved to require people to wear masks at the Burlington Farmers Market. Market director Mieko Ozeki had requested the amendment during the meeting's public forum, but it failed in a tie vote.

Dieng voted against the resolution as a whole, calling the measure "almost meaningless" because it can't be enforced. He also said that he'd heard from business owners who were opposed to the mandate.

Now that it's approved, the order is effective immediately. It requires shop owners to post signage warning customers of the rule.

Councilors also heard an update on the downtown CityPlace Burlington project. In mid-February, the city proposed a new development agreement to project owner Brookfield Asset Management. The company has not responded to the proposal but "continues to voice confidence in Burlington and in the project over the long term," said Jeff Glassberg, a consultant working as a liaison between the city and the developers.

The project was set to begin construction in August 2020, but Glassberg expects that the pandemic could alter that timeline.

CityPlace Burlington Developers Provide Glimpse Into New Plans
By Courtney Lamdin
Off Message
"This is still a very highly desirable site in the center of a vibrant downtown. I think the prospects for redevelopment of this site remain very high," Glassberg said. "Has this been a saga? Absolutely. Are people frustrated? Absolutely. But the basics that make that location valuable don't change."

The council discussed the CityPlace development agreement in executive session but took no action. Brookfield representatives did not attend the virtual meeting.

Later in the meeting, the council altered the development agreement for Cambrian Rise, a 14-building project that's under construction on North Avenue. The council voted unanimously to allow developer Eric Farrell to expand the project from 770 to 950 housing units.

Hanson also proposed an amendment that ultimately passed. It will require tenants at the new development with leases beginning July 1 to pay a minimum of a $50 surcharge if they have more than one vehicle. Carless tenants, meanwhile, would have their rent reduced by the same amount. Residents with one vehicle will see no change.

The rules don't apply to residents at either the Champlain Housing Trust or Cathedral Square Corporation's housing projects at Cambrian Rise.

Hanson and Pine had negotiated the lease requirement with Farrell before the meeting, a situation Councilor Karen Paul (D-Ward 6) called "unorthodox." But she ultimately voted for the amendment after hearing that the developer was "amenable to it."

The additional 180 units will be built within the 14 permitted buildings' footprints "by redesigning floor plans to decrease unit sizes reflecting national real estate market trends," according to a project memo. Some building heights may also need to be raised to fit the additional units. Otherwise, "the revisions to the overall project design will be little noticed by the general public," a memo from Farrell says.

Once built out, the mixed-use project on North Avenue will be the single largest housing development in Burlington.

The additional units would add 45 more "affordable" units for a total of 238, the largest number of "inclusionary" units in a city development, the memo says. The changes still must be approved by state and local regulators.

Correction, May 19, 2020: A previous version of this story misidentified what, exactly, Paul referred to as "unorthodox."
Prev
Next