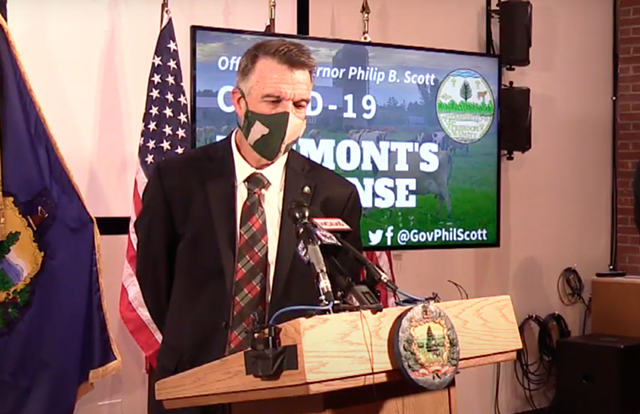 Wearing masks in public will be mandatory in Vermont under a new order Gov. Phil Scott announced Friday. Though he'd long resisted issuing such a mandate, the governor described the move as a bid to keep the state’s infection rates the lowest in the nation as COVID-19 cases soar in other states.

Noting that those cases are “inching closer to our borders,” Scott said the time had come to require what is now a mere recommendation — that people wear masks in public settings where social distancing is not possible, effective August 1.

“Looking at the situation in the South and West and knowing we’ll have more people coming to Vermont, and more Vermonters inside as the weather gets colder, we need to be sure we’re protecting the gains we’ve made,” Scott said.

The order, which Scott has resisted for weeks in favor of education and encouragement, will require anyone over 2 years old to wear a mask in public — indoors or outdoors — where they cannot maintain six feet of distance from one another.


That includes public-facing businesses, which will be required to install signs informing customers of the requirement. Businesses will be able to refuse service to anyone not wearing a mask, but there are no fines or state enforcement proposed at this time, Scott said.

People with medical conditions such as asthma are not bound by the mandate. Nor are people eating and drinking, or those engaging in exercise or "strenuous activity," according to the new executive order.

The difficulty of enforcing such a measure is one of the reasons Scott said he resisted imposing it until now, even as many, including political opponents, have been pressuring him to do so.

The Vermont Medical Society on Wednesday called for the new measure, and on Friday, the group praised Scott's decision.

“Unfortunately, this issue has become polarized, and I’m still worried that a mandate will create conflict and resistance,” Scott said.


He pleaded with people who might not want to wear a mask to “look at the real data, not just something you see on Facebook,” and to consider the health of their families and fellow Vermonters.

He noted that the U.S. Centers for Disease Control and Prevention has estimated that the surge in infections in the Southwest could be controlled within six weeks if people were “disciplined enough to wear masks.” He also noted that President Donald Trump, whom he called a “skeptic” of mask usage, “is convinced masks will help us get through this.”

Scott has previously said he knows many Vermonters who bristle at being told what to do by the government, and he spoke directly to them Friday with a plea to rethink their opposition.

“Please, help us out — not because it’s mandated,” Scott said, “but because it’s the right thing to do for our seniors, for our kids, for our own health and for our economy.”


Scott acknowledged that it would be a “delicate balance” between business owners’ right to refuse service to people who don’t wear masks and the rights of people with legitimate medical conditions not to wear one or explain themselves to anyone.

He also urged those already wearing masks in such situations to give the benefit of the doubt to those who don't, noting that they could have a legitimate health condition. It is better to just avoid such people than to confront them, he said.

“Attacking, shaming, judging isn’t going to help, but understanding and meeting people where they are, and maybe using a little kindness and understanding, might,” he said. “Let’s not make the news with screaming matches caught on video.”

Asked why he was delaying the effective date of the mandate for more than a week, Scott said he didn’t see it as an emergency and wanted to give businesses and people time to prepare.

“This is not a panic situation. This is trying to be proactive,” he said.

Health Commissioner Mark Levine supported that view, arguing that Vermont enjoys nation-leading low infection rates and the goal of the mandate was to preserve that enviable position.

“For many of the states, it has actually been implemented in a desperation move because things have gotten so bad,” Levine said.

Scott has long pointed to states such as California that had mask mandates that seemed ineffective in controlling outbreaks to justify keeping the mask guidance voluntary.

Yet there is scant but growing evidence that mask mandates can buttress education efforts, Levine said. One recent study estimated that places that had imposed such mandates have avoided 250,000 to 450,000 new infections, he said.

Michael Pieciak, commissioner of the Department of Financial Regulation, added that infection rates in counties in Colorado with mandates appeared to have infection rates 8 to 16 percent lower than counties that did not, he said.

“That was part of the reason for issuing a statewide mask mandate just last week,” Pieciak said of Colorado.

He called the rate of increase in new cases around the country “staggering,” noting that the nation added 1 million new cases in just 15 days, half the time it took to add the previous million. To date, more than 4 million Americans have been infected.

The rates in the Northeast are less explosive, he noted, but still concerning. Rates in nearby states and Québec grew at more than 8 percent over the last week. Another measure of regional infections showed them increasing by 22 percent since early July.

In addition, more counties in states within driving distance of Vermont have rising infection rates than falling ones. This trend has decreased the number of potential visitors who can travel to the state by car without quarantining.

When the program was expanded in late June, 19 million travelers were estimated to qualify as being from “safe” counties with active infection rates of less than 400 per million. That number has since fallen to 7.1 million, Pieciak said.